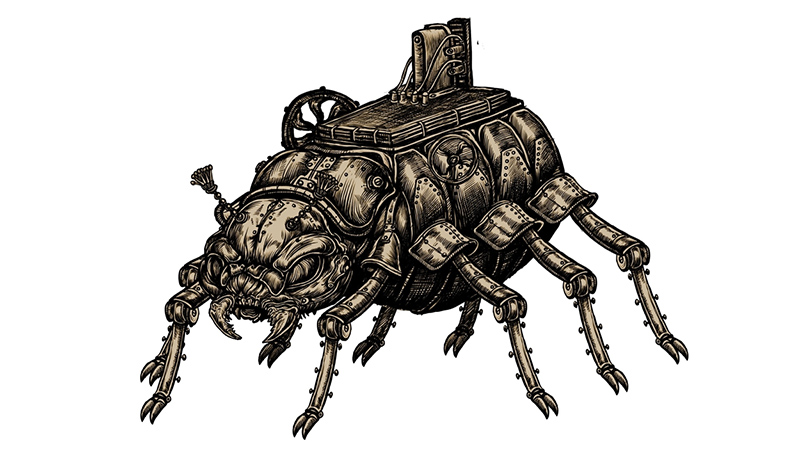 A spy bug is a tiny construct built to look like a large scarab. Thanks to their diminutive size and ability to climb along walls, spy bugs make the perfect eyes and ears for nobles, wizards, and others who would profit from spying on their enemies (or friends). Thanks to special magical sensors built into its carapace, the bug sends back audio and visual information to a specially tuned viewing mirror.

Crafty wizards (especially the paranoid ones) often create or purchase spy bugs to keep watch of their laboratories, dungeons, and towers. Building a spy bug costs 6,000 gp in materials and 10 days to build to spy bug and its viewing mirror. Because of the relatively short period that it takes to build a spy bug (compared to a golem or shield guardian), magic shops will carry at least a few in stock, ready to be sold to wealthy nobles, lords, and others with the requisite coin and motivation.

The spy bug has limited ability to defend itself. If cornered, it can zap those who would try to grab it with a stunning shock it emits from its mandibles.

Bound. The spy bug is magically bound to a viewing mirror. As long as the bug and the mirror are within 1 mile of each other on the same plane of existence, the owner of the viewing mirror can see through the spy bug’s eyes and hear what it hears. All Wisdom (Perception) checks are made with the spy bug’s modifier.

Spider Climb. The spy bug can climb difficult surfaces, including upside down on ceilings, without needing to make an ability check.

Shock. Melee Spell Attack: +3 to hit, reach 5 ft., one target. Hit: 4 (1d8) lightning damage. If the target is a creature, the target must make a DC 11 Constitution saving throw or become stunned until the end of the spy bug’s next turn.

The spy bug will be included as a Dungeons & Dragons Fifth Edition entry in a new book I’m working on for DMsguild.com titled, simply, CR 1/8.

If you like the spy bug’s stat block, then get the word out by sharing it. Click one of the buttons below.