Stat Anything: Creepy Things Somebody Asked Me to Stat | Monsters for Dungeons & Dragons Fifth Edition 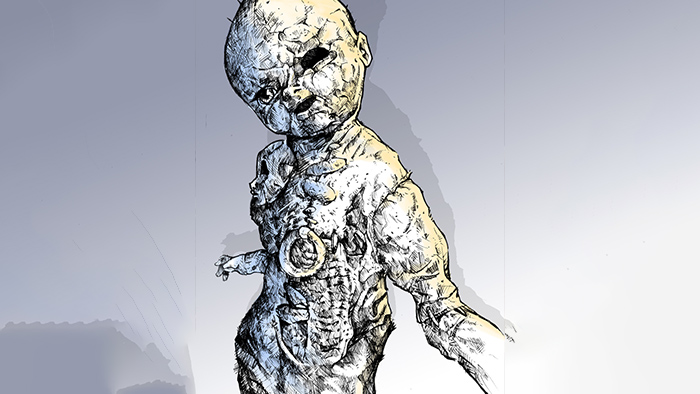 DM DaveLeave a Comment on Stat Anything: Creepy Things Somebody Asked Me to Stat | Monsters for Dungeons & Dragons Fifth EditionPosted in Fun Stuff

If you ever want to get a mention on this site, here’s the easiest way to do it.

Send me a weird picture on Instagram or tell me a crazy story. Chances are if I find it weird, I’ll probably stat it up.

And I mean weird. Not mean. Like, don’t send me a picture of ex-girlfriend asking me to turn it into a fiend or something. Or something racist or (ugh) political. There’s enough of that nonsense in the world, this blog can do without it.

Want an example of what I’m talking about? These two images were sent to me by Instagram follower @gekkogeek. And they are, well… take a look for yourself:

Seriously, @gekkogeek, what the hell is going on at your house, dude?

Anyways, how could I not get something like this sent to me and create it for Dungeons & Dragons Fifth Edition?

First, creepy dolls are something that has been on my list for a little bit. Ravenloft 2e had “doll golems” which were essentially just dolls that came to life and tried to eff up adventurers that came across them in whatever weirdo haunted house, castle, etc. they were discovered.

Man, this gig is weird.

The doll golem is an animated version of a child’s toy that can be put to either good uses (defending the young) or evil uses (attacking them). It is often crafted so as to make it appear bright and cheerful when at rest. Upon activation, however, its features become twisted and horrific.

Cunning Action. On each of its turns, the golem can use a bonus action to take the Dash, Disengage, or Hide action.

Mimicry. The golem can mimic any sounds it has heard, including voices. A creature that hears the sounds can tell they are imitations with a Successful DC 14 (Insight) check.

Bite. Melee Weapon Attack: +7 to hit, reach 5 ft., one creature. Hit: 6 (1d4 + 4) piercing damage plus 10 (3d6) necrotic damage, and the golem attaches to the target. While attached, the golem has advantage on its Dexterity saving throws and the target has disadvantage on its attack rolls against the golem. When a creature the golem can see, including the target, targets it with an attack, the golem can use its reaction to make the creature it is attached to become the target instead. The golem can detach itself by spending 5 feet of its movement. A creature, including the target, can use its action to make a DC 14 Strength check. The target makes this check at disadvantage. On a success, the creature detaches the golem and is grappling it.

Infectious Laughter. The doll makes one bite attack against a creature it is attached to. If the attack hits, the target takes the bite’s damage and must succeed on a DC 12 Wisdom saving throw. On a failed saving throw, the creature falls into fits of maniacal laughter for 1 minute. While affected by the laughter, the creature falls prone and becomes incapacitated and unable to stand up for the duration. A creature with an Intelligence score of 4 or less isn’t affected. At the end of each of its turns, and each time it takes damage, the target can make another Wisdom saving throw. The target has advantage on the saving throw if it’s triggered by damage. On a success, the spell ends.

Taxidermy is the eerie practice of preserving and stuffing dead animals, then placing them around one’s estate as art objects. These creatures could have been prized hunting trophies or even a beloved pet.

Of course, creepy wizards take this practice one step further. Not only do they preserve the dead animal, but bring it back to some semblance of life in the form of a golem.

Sometimes, these creatures can even wield weapons.

Filth Cloud. Whenever the golem takes 10 or more damage from a single attack, a cloud of filth erupts from its body in a 20-foot radius sphere centered on the golem. Each creature in the area must succeed on a DC 12 Constitution saving throw or take 10 (3d6) necrotic damage and become poisoned until the end of its next turn.

Multiattack. The golem makes two attacks with its halberd and one attack with its bite.

Once again, a big thanks to @gekkogeek for the crazy ass pictures. Do the guy a favor and add him on Instagram and let him know that you will never, EVER under any circumstance come to his house for tea.

For more crazy monsters, be sure to follow along with the blog. Just sign up using the opt-in form on the right or down in the footer.

Thumbnail image by The Searcher. Photos used with permission from @gekkogeek.