Stat Anything: Mi-Go for 5e D&D 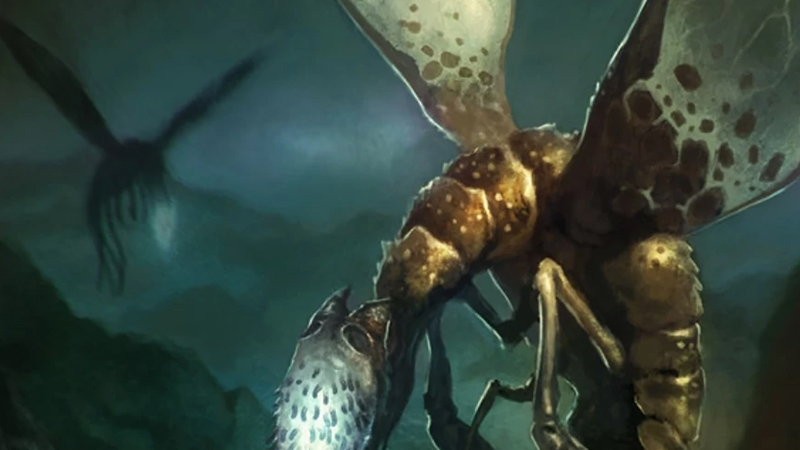 DM Dave1 Comment on Stat Anything: Mi-Go for 5e D&DPosted in Fun Stuff

I had a little time to kill before last night’s session, so I thought I might create a quick monster. Dyson Logos just posted up a pretty cool map on his site called the Astral Sanatorium of the Mad Mi-Go Brain Cluster.

As with most of his awesome maps, my wheels started turning right away. I had to use this thing!

Only trouble is, Mi-Go don’t have official stats for fifth edition. However, they have been created for third edition (in Call of Cthulhu d20) as well as Pathfinder.

What are the Mi-Go?

Part of the infamous Cthulhu Mythos, the Mi-Go are large, pinkish, fungoid, crustacean-like entities the size of a man; where a head would be, they have a “convoluted ellipsoid” composed of pyramided, fleshy rings and covered in antennae. They are about five feet (1.5 m) long, and their crustacean-like bodies bear numerous sets of paired appendages. They possess a pair of membranous bat-like wings which are used to fly through the “aether” of outer space. The wings do not function well on Earth.

In HP Lovecraft’s stories, the Mi-Go could transport humans from Earth to Pluto (and beyond) and back again by removing the subject’s brain and placing it into a “brain cylinder” as an isolated brain, which can be attached to external devices to allow it to see, hear, and speak.

How can we make Mi-Go for Dungeons & Dragons 5e?

Fortunately, creating Mi-Go is just a matter of taking 3.0 stats and converting them. I’ve found a couple sources. First, the stats are available for free on this Pathfinder open source site that I found here. Also, I found the stats for the old Call of Cthulhu. Finally, there’s someone that’s already made them for 5th edition and you can see that here.

The challenges vary greatly for each source. Personally, I like the idea of them being totally weird, but squishy, so I’m more inclined to go with the old Call of Cthulhu version. In my opinion, weak and weird is always cooler than OP AF.

Mi-Go (The Fungi from Yuggoth)

Nipper. Melee Weapon Attack: +3 to hit, reach 5 ft., one target. Hit: 4 (1d6 + 1) bludgeoning damage, and the target is grappled (escape DC 11) if is a Medium or smaller creature. Until the grapple ends, the target is restrained. The mi-go can grapple only one target at a time.

Brain Surgery. The mi-go makes one nipper attack against a Medium or smaller creature it is grappling. If the attack hits, the target must succeed on a DC 13 Constitution saving throw or its hit points maximum is reduced by an amount equal to the damage taken. This reduction lasts until the creature finishes a long rest. If this effect reduces the target’s hit point maximum to 0, the mi-go removes the target’s brain and the target’s body dies immediately. The effect does not work if the creature lacks a central nervous system.

Electric Weapon. Ranged Weapon Attack: +4 to hit, range 10/20 ft., one target. Hit: 5 (1d10) lightning damage. If the target is a creature, it must succeed on a DC 13 Constitution save or become paralyzed for 1 minute. A creature can repeat the saving throw at the end of each of its turns, ending the effect on itself on a success.

Lightning Gun. The mi-go fires a charge from its lightning gun in a 120-foot line that is 5 feet wide. Each creature in that line must make a DC 13 Dexterity saving throw, taking 9 (2d8) lightning damage on a failed save, or half as much damage on a successful one.

Mist Projector. The mi-go projects cold mist in a 15-foot cone. Each creature in that area must make a DC 13 Constitution saving throw, taking 7 (2d6) cold damage on a failed save, or half as much damage on a successful one.

This gun has 10 charges. While holding it, you can use an action to expend 1 of its charges to fire lightning from it in a 120-foot line that is 5 feet wide. Each creature in that line must make a DC 15 saving throw, taking 9 (2d8) lightning damage on a failed save, or half as much damage on a successful one.

The gun regains 1d10 expended charges daily at dawn. If you expend the gun’s last charge, roll a d20. On a 1, the gun breaks and no longer functions.

Ah, the old plutonian fungus wasps. Always good for a laugh, especially when they’re carving out your brain and throwing in a jar.

Hope you had fun with this one. As usual, it’s free for you to use in your fifth edition D&D campaigns. Just not commercially. And the art isn’t mine; borrowed.

Be sure to follow me by opting in on the side bar or down in the footer.