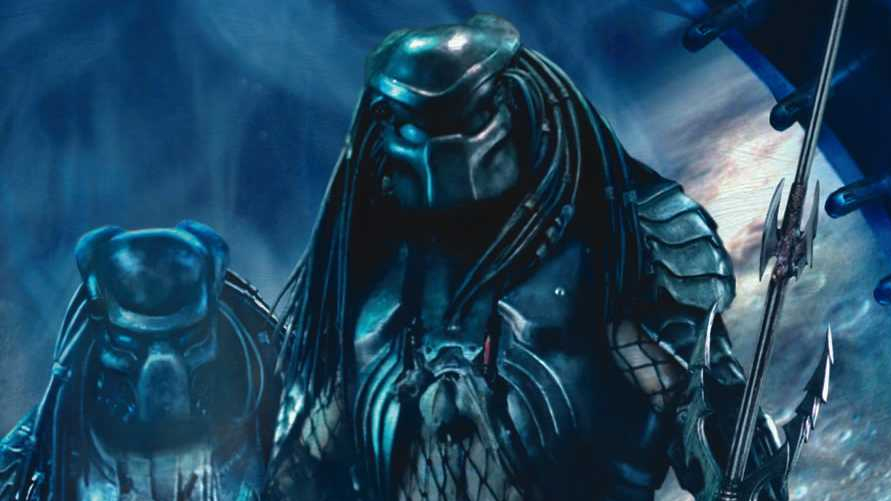 The Yautja, (pronounced Ya-OOT-ja), known colloquially as the Predators or Hunters, are an extraterrestrial species characterized by their hunting of other dangerous species for sport and honor, including humans. The Yautja are a sentient, humanoid race that breathe an atmosphere similar to that of Earth’s but possess a level of technological advancement far in excess of anything available to humans. The Predators stalk and kill their prey using a combination of highly advanced technology, such as active camouflage and energy weapons, combined with comparatively primitive traditional weapons, such as blades, spears, and nets. The Predators often ritualistically mutilate their prey and usually claim a trophy from their kills. Capable of interstellar travel in starships, the Predators have hunted on Earth for centuries and have also had prior contact with the Engineers.

Predators are bipedal humanoids, physically distinguishable from humans by their greater height, the long, hair-like appendages on their heads (nicknamed dreadlocks), their reptilian skin and their faces, which feature arthropod-like mandibles and no visible nose. The biological purpose of the distinctive mandibles is unclear — some have proposed they may be used in reproduction or mating rituals. They may also be a vestigial piece of anatomy, as noted by Lex Woods, who compares it to the human appendix. Yautja use them to convey emotions; for example, flared mandibles apparently signify anger or surprise, mandibles clicking together can signify interest or curiosity, and Yautja have even been said to “grin” with them. Predators have also been known to employ their mandibles as weapons, using them to inflict grievous bite wounds on their opponent. As well as the fleshy dreadlocks around the side of the head, some Predators have also been seen to possess sparse, quills on their cheeks and above the eyes.

Xenomorph Breeders. Yautja have been known to deliberately breed Xenomorphs in order to hunt them, often as part of initiation rituals for young Predators.

Aside from their repeated conflicts with humans, the Predators have notably been associated with Xenomorph XX121, known to them as kiande amedha (“hard meat”), whom they revere as perhaps the most worthy of all prey. They have been known to breed the creatures from captive Queens, employing them in rite-of-passage trials that serve as an initiation ritual for young hunters, and even artificially “seeding” planets with Xenomorphs to Hunt.

Code of Honor. The Yautja have a Code of Honor that it expects all members of its species to adhere to on pain of not being seen as a “true Yautja” and therefore subject to being destroyed. Therefore most Yautja are molded around that code, being ruthless but honorable, with the exception of Bad Bloods. Aggression and arrogance seems to be innate in Hunters, especially young males.

Special Equipment. The yautja is equipped with a yautja hunting helm and a yautja gauntlet.

Mimicry. The yautja can mimic any sound it has heard, including voices. a creature that hears the sounds can tell they are imitations with a successful DC 13 (Insight) check.

Multiattack. The yautja uses its plasmacaster if it is able. It then makes three attacks with its wristblades.

Plastermacaster (Recharge 5-6). Ranged Weapon Attack: +6 to hit, range 120 ft., one target. Hit: 36 (8d8) force damage. If the yautja loses or removes its yautja hunting helmet, it cannot use its plasmacaster.

Smart Disc (1/Day). The yautja throws its smart disc at one creature it can see within 60 feet of it. The target must make a DC 14 Dexterity saving throw. On a failed saving throw, the smart disc cuts off one of the creature’s heads. The creature dies if it can’t survive without the lost head. A creature is immune to this effect if it is immune to slashing damage, doesn’t have or need a head, has legendary actions, or the GM decides that the creature is too big for its head to be cut off this with this weapon. Such a creature instead takes 27 (6d8) slashing damage from the hit.

The smart disc returns to the yautja after it is thrown.

This nonmagical helm is specially designed for a yautja but can be retrofitted for other types of humanoids.

While wearing this helm, you gain the following benefits:

While wearing this nonmagical gauntlet, you gain the following benefits: