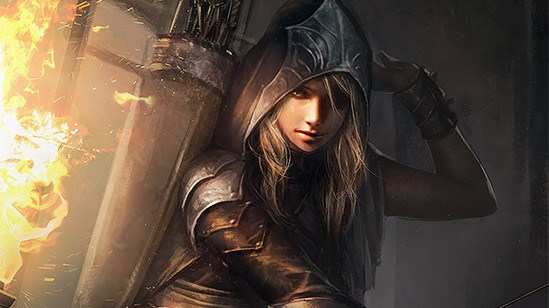 In the Bloody Bunch campaign which is soon wrapping up (they’re at 19th-level now), Tella is probably the best–and most interesting–of all the NPCs the characters travel with. Originally the doppelganger servant of Nezznar (yes, the one from Phandelver), Tella has mostly turned good over the years. Now, she aims to take down the villainous [redacted] with the other characters.

I’ve created Tella here as a doppelganger 20th-level expert sidekick using the rules from Unearthed Arcana/Essentials Kit. To make it rules compliant, I removed her multiattack from her original stat block.

Special Equipment boots of the winterlands, bracers of archery, cloak of the bat, quiver of Ehlonna

Shapechanger. Tella can use her action to polymorph into a Small or Medium humanoid she has seen, or back into her true form. Her statistics, other than her size, are the same in each form. Any equipment she is wearing or carrying isn’t transformed. She reverts to her true form if she dies.

Ambusher. In the first round of combat, Tella has advantage on attack rolls against any creature she has surprised.

Dungeon Delver. Tella is alert to hidden traps and secret doors. She has the following benefits:

Reliable Talents. Whenever Tella makes an ability check that includes her whole proficiency bonus, she can treat a d20 roll of 9 or lower as a 10.

Stroke of Luck (Recharges after a Short or Long Rest). Tella has an uncanny knack for turning failure into success. If Tella’s attack misses a target within range, she can turn the miss into a hit. Alternatively, if she fails an ability check, she can treat the d20 roll as a 20.

Surprise Attack. If Tella surprises a creature and hits it with an attack during the first round of combat, the target takes an extra 10 (3d6) damage from the attack.

Read Thoughts. Tella magically reads the surface thoughts of one creature within 60 feet of her. The effect can penetrate barriers, but 3 feet of wood or dirt, 2 feet of stone, 2 inches of metal, or a thin sheet of lead blocks it. While the target is in range, the doppelganger can continue reading its thoughts, as long as the doppelganger’s concentration isn’t broken (as if concentrating on a spell). While reading the target’s mind, the doppelganger has advantage on Wisdom (Insight) and Charisma (Deception, Intimidation, and Persuasion) checks against the target.