The Killer Rabbit of Caerbannog | New Monster for Fifth Edition 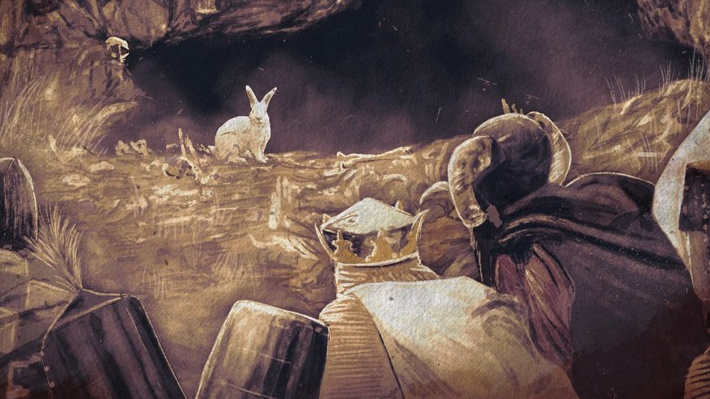 The Cave of Caerbannog is the home of the Legendary Black Beast of Arrrghhh (named for the last utterance of anyone who ever saw it). This is guarded by a monster which is initially unknown.

King Arthur and his knights are led to the cave by Tim the Enchanter and find that they must face its guardian beast. Tim verbally paints a picture of a terrible monster with “nasty, big, pointy teeth!”, so terrifying that Sir Robin soils his armor at the mere description.

When the guardian appears to be an innocuous white rabbit, surrounded by the bones of the fallen, Arthur and his knights no longer take it seriously. Ignoring Tim’s warnings (“a vicious streak a mile wide!”), King Arthur orders Bors to chop the rabbit’s head off. Bors confidently approaches it, sword drawn, and is immediately decapitated by the rabbit biting clean through his neck, to the sound of a can opener. Despite their initial shock, Sir Robin soiling his armor again, and Tim’s loud scoffing, the knights attack in force. But the rabbit injures several of the knights and kills Gawain and Ector with ease.

The knights themselves have no hope of killing or injuring the rabbit. Arthur panics and shouts for the knights to retreat (“Run away!”). Knowing they cannot risk attacking again, they try to find another way to defeat the beast. The Holy Hand Grenade of Antioch is ultimately used to kill the rabbit and allow the quest to proceed.

The Killer Rabbit of Caerbannog

Nasty, Big, Pointy Teeth. Melee Weapon Attack: +9 to hit, reach 5 ft., one target. Hit: 23 (5d6 + 6) slashing damage. When the rabbit attacks a creature that has at least one head the creature must make a DC 17 Constitution saving throw. On a failed save, the rabbit can bite off one of the creature’s heads. The creature dies if it can’t survive without the lost head. A creature automatically passes its saving throw if it is immune to slashing damage, doesn’t have or need a head, has legendary actions, or the GM decides that the creature is too big for its head to be bitten off.

Get the Hand of the Eight Adventure Series only $1

The Hand of the Eight is a 35-part adventure series available on Patreon that takes characters from Level 1 to 20. Get the entire serires for only $1.