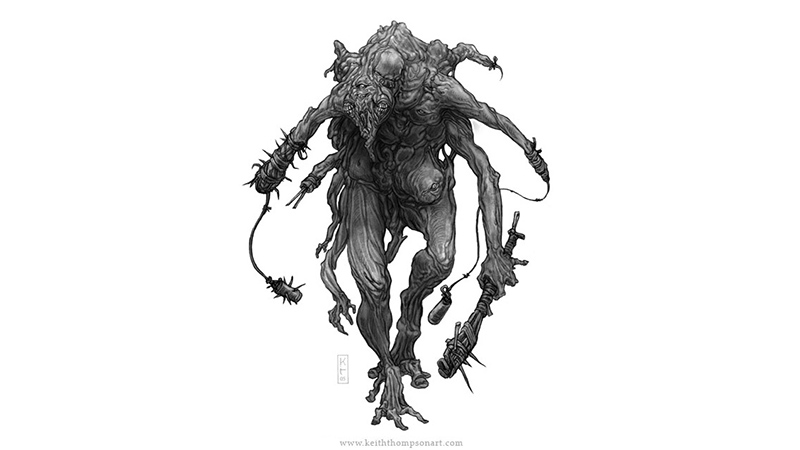 I love this gig. Not just because I get to constantly write about the world’s #1 roleplaying game, but sometimes I get some… unusual… requests.

Earlier today as I was going through my Instagram DM requests, I got a message from a fella named Matt.

“Hey, can I get some advice? I’m a new DM and for some reason I let one of my players collect a ton of body parts then when he found a necromancer he managed to combine them all into this giant thing and I have no idea what stats to give it.”

Uh, challenge accepted. Obviously. But it gets better.

The player drew a picture of it, too.

You know, in case I missed anything.

Matt informed me that the thing is powered by the soul of a dead wild magic sorcerer.

That sorcerer was a player character that they sacrificed to bring this monstrosity to life.

The omnimortis is an undead monstrosity created through a macabre assembly of dead humanoids, mammals, and crustaceans. At its core, the thing is powered by the soul of a dead wild magic sorcerer.

It was created by a group of plucky adventurers hoping that it would make for a good companion. Unfortunately, they used a discount necromancer to create it and the wild magic sorcerer who powers it isn’t too happy about her new, many-limbed existence. Thus, hijinx ensued.

When the thing isn’t falling apart or falling down, its stench is near unbearable, causing those with weak constitutions to vomit immediately. Its chief instinct in combat is to grapple opponents with one of its many arms (or its giant crab claw) and either slam it or bite it with one of its many heads.

When the omnimortis has trouble deciding its best course of action (probably due to all its heads) or takes damage, its prone to splitting and creating two new equally horrible monsters, each one dripping ichor and embalming fluid all over the place.

Undead Nature. The omnimortis does not require air, drink, food, or sleep.

Grappling Arms. The omnimortis can grapple one Large creature or up to four Medium or smaller creatures at a time.

Multi-Headed. The omnimortis has advantage on all Wisdom (Perception) rolls and on saving throws against being blinded, charmed, deafened, frightened, stunned, or knocked unconscious.

Rolling Pounce. If the omnimortis moves at least 20 feet straight toward a creature and then hits it with a ram attack on the same turn, that target must succeed on a DC 13 Strength saving throw or be knocked prone. If the target is prone, the omnimortis can make one bite attack against it as a bonus action.

Stench. Any creature that starts its turn within 5 feet of the omnimortis must succeed on a DC 13 Constitution saving throw or be poisoned until the start of its next turn. On a successful saving throw, the creature is immune to the omnimortis’s Stench for 24 hours.

Undead Fortitude. If damage reduces the omnimortis or any of its smaller parts, it must make a Constitution saving throw with a DC of 5 + the damage taken, unless the damage is radiant or from a critical hit. On a success, the omnimortis drops to 1 hit point instead.

Multiattack. The omnimortis makes four slam attacks and one claw attack. It can replace any of its slam attacks with a bite attack.

Involuntary Split. When an omnimortis that is Medium or larger is subjected to slashing or thunder damage, and it has at least 10 hit points, it uses its reaction to Split.

Thanks to Matt Feist for the Opportunity!

This thing was a ton of fun to create even if it is a hot mess. And I just love stories of DMs that let their players get away with some super creative stuff.

Thanks again to the folks on Instagram that entered the contest!