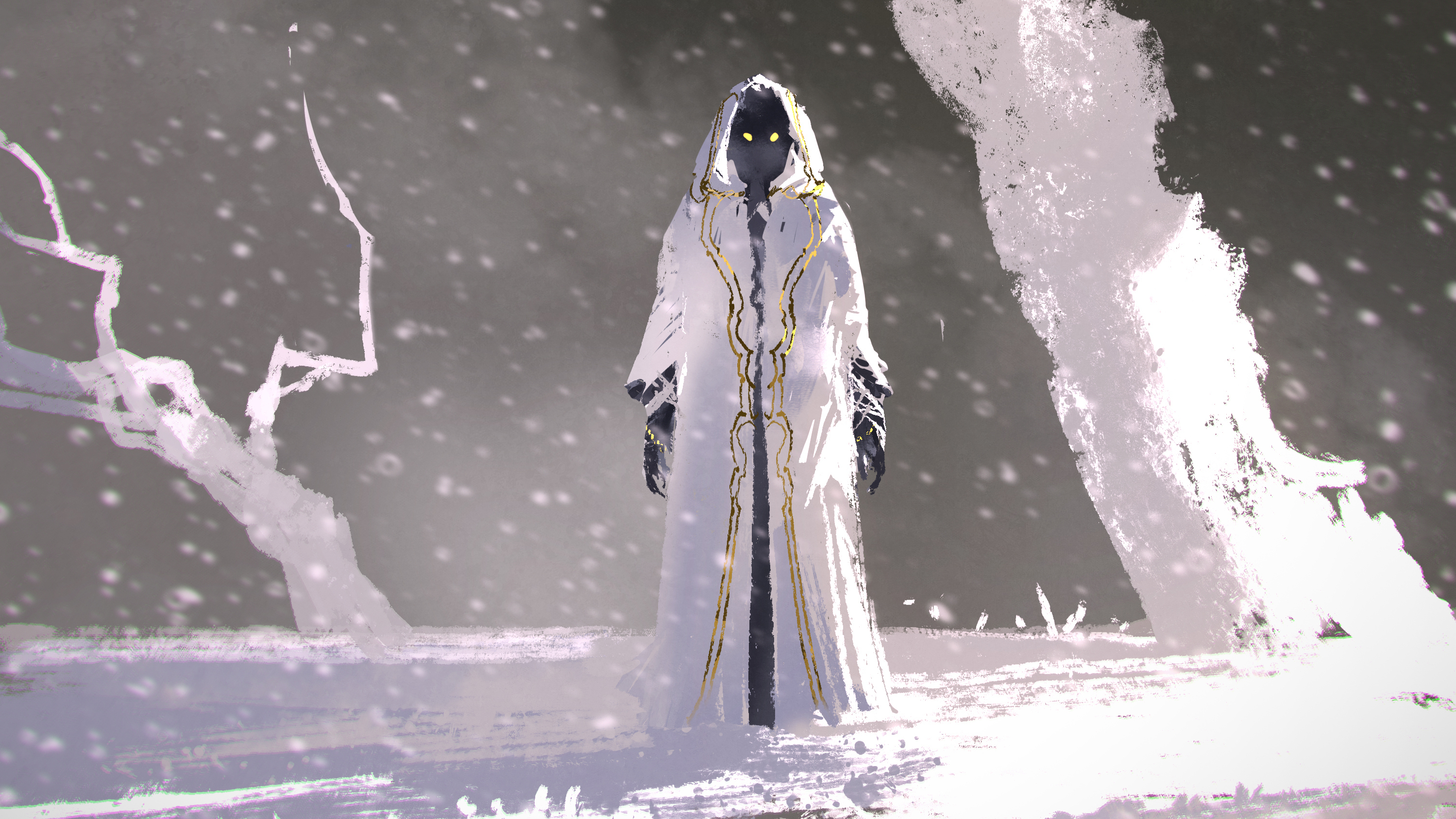 Among the most feared creatures of the north are the dreaded winter wraiths. Although the Rasgax call these creatures “wraiths”, the term is a misnomer; winter wraiths are elementals, created from chaos and cold energy, relics of the Time Forgotten.

Lords of Winter. The Olyothyrians speak of an ancient winter kingdom ruled by the winter wraiths. The Anorians, before their corruption by Vapul, fought the winter wraiths’ kings, forcing them to retreat further up the Northern Stretch to Cescuyra. There are hushed legends that say that Vapul was once a winter wraith, the most powerful of their kind.

Enemies of Naeyer’s Servants. The ultrapowerful servants of Naeyer are the sworn enemies of the winter wraiths. The touch alone of one of the sun god’s solars is enough to destroy a winter wraith. As such, winter wraiths immediately flee when pitted against one of these celestials.

Frozen Form. A creature that touches the wraith or hits it with a melee attack while within 5 feet of it takes 4 (1d8) cold damage. Any nonmagical weapon made of metal freezes and turns brittle. After dealing damage, the weapon takes a permanent and cumulative -1 penalty to damage rolls. if its penalty drops to -5, the weapon shatters. Any creature in physical contact with an object frozen by this trait must succeed on a Constitution saving throw or drop the object if it can. If it doesn’t drop the object, it has disadvantage on attack rolls and ability checks until the start of its next turn.

Slam. Melee Weapon Attack: +6 to hit, reach 5 ft., one target. Hit: 9 (2d6 + 2) cold damage. In addition, nonmagical armor worn by the target is partly frozen and takes a permanent and cumulative -1 penalty to the AC it offers. The armor is destroyed if the penalty reduces its AC to 10.

Ice Dagger. Ranged Weapon Attack: +6 to hit, range 20/60 ft., one target. Hit: 7 (2d4 + 2) cold damage and the dagger becomes lodged in the creature’s flesh. While lodged within the creature’s flesh, the target takes 1 cold damage at the start of each of its turns. Additionally, the wraith knows the direction and distance to the target as long as the two of them are on the same plane of existence and the dagger remains within the target’s flesh. A creature, including the target, can use its action to remove the dagger from the target’s flesh with a successful DC 16 Strength saving throw. Or if the ice dagger takes 2 fire damage it is destroyed.

Frost Breath (Recharge 5-6). The wraith exhales a 90-foot cone of freezing air. Each creature in the area must succeed on a DC 16 Constitution saving throw. A creature takes 36 (8d8) cold damage on a failed saving throw or half as much damage on a successful one.