Shark with a Knife | New Monster for Fifth Edition 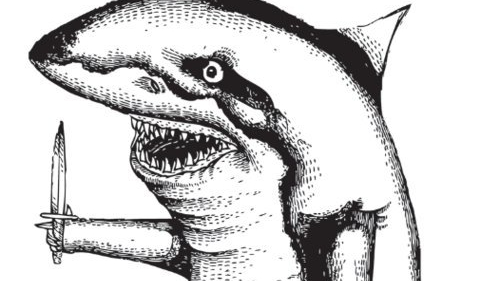 Shark with a Knife

There are only three things known about the enigmatic Shark with a Knife. First, it is a shark. Second, it is carrying a knife. Third, it’s Vadriken the Three-Timer’s archnemesis.

Everything else is up for debate. Is it male? Is it female? Why does it have arms and legs? How come it sounds like a Murktowner with it talks? Why is its favorite sandwich pork belly, tomato, and lettuce on rye? Why does it yell ‘BOOM’ every time it stabs someone with its eponymous knife?

Shark with a Knife

Limited Amphibiousness. The shark with a knife can breathe air and water, but it needs to be submerged at least once every 4 hours to avoid suffocating.

Multiattack. The shark with a knife attacks with its knife. If its knife attack hits it can use its bonus action to make one bite attack.

Knife. Melee Weapon Attack: +6 to hit, reach 5 ft., one target. Hit: 4 (1d4 + 4) piercing damage. If the shark with a knife hits, it yells “BOOM!” This declaration of BOOM has no effect other than just being really loud and weird.