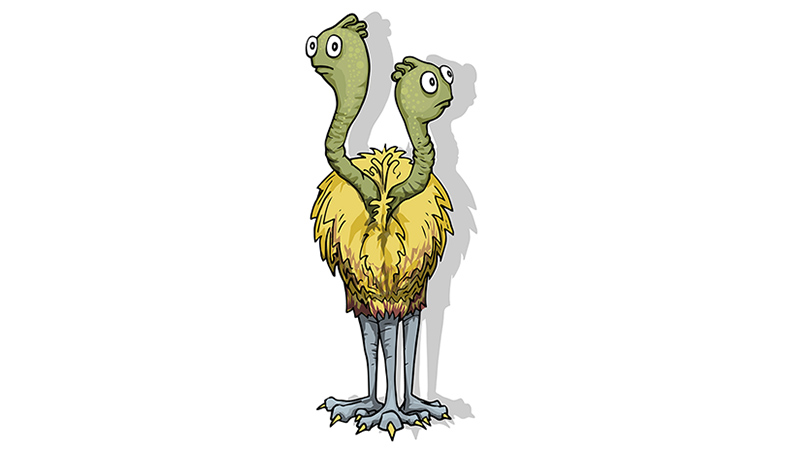 Here is what Daneric Von Alfkaesian, Candlekeep’s leading researcher on wild woggles, had to say about this unusual beast:

And that’s the trouble with woggles.

Anyone that gets too close to one of these bizarre, two-headed and three-legged bird things inevitably contracts the loathsome woggle-speak curse, a frustrating, mind-altering condition that makes it so that everything its contractor speaks or writes comes out as “woggle.”

Fortunately, these creatures are rare, confined to obscure islands and untracked jungles. Otherwise, everyone in the Realms could be speaking like woggles.

Woggle Woggle. The woggle babbles in its bizarre woggle-speak while it can see any creature and isn’t incapacitated. Each creature that starts its turn within 20 feet of the woggle and can hear it must succeed on a DC 11 Intelligence saving throw or be cursed with woggle-speak. The cursed target loses all of its languages and can only speak and write the word “woggle.” While cursed, casting a spell that includes a verbal component is impossible. Woggle-speak is gibberish and can’t be understood with a comprehend languages spell or similar magic, nor understood by others with the same curse. Telepathy, mind-reading, and other spells used for non-verbal communication similarly don’t work as the cursed creature can only create images of the word “woggle” or a physical woggle in its mind. The curse lasts until removed by the remove curse spell or other magic. Creatures immune to being charmed automatically succeed on the saving throw. A creature that succeeds on its saving throw is immune to this effect for 24 hours.

Two Heads. The woggle has advantage on Wisdom (Perception) checks and on saving throws against being blinded, charmed, deafened, frightened, stunned, and knocked unconscious.

If you like the woggle’s stat block, then get the word out by sharing it. Click one of the buttons below.

Woggles will be included as a Dungeons & Dragons Fifth Edition entry in a new book I’m working on for DMsguild.com titled, simply, CR 1/8.