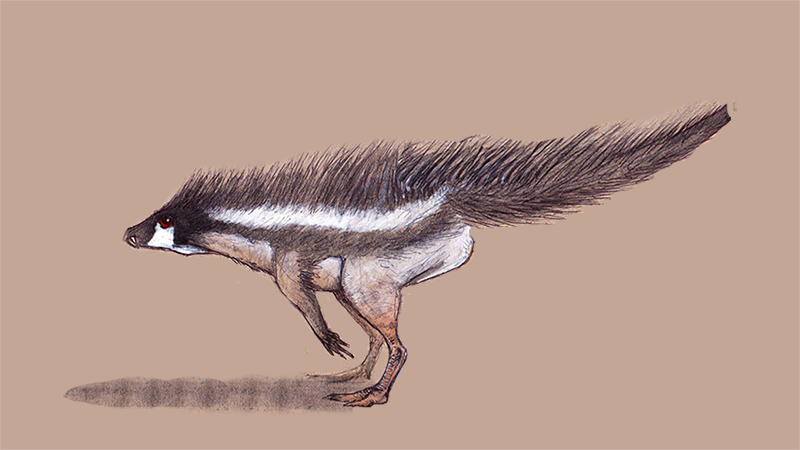 Looks like those mad mages are at it again.

Part skunk and part velociraptor, the skunkasaurus makes for one bizarre encounter. Not only do these critters have the ferocious carnivorous appetites of the predatory velociraptors, but they have learned to weaponize their skunklike defensive secretions to temporarily disable their prey–or ward off larger beasties, as it were.

Skunkasauruses can be found traveling in packs in primordial jungles, forests and other places where dinosaurs are common.

Fun note: this is a monster that my son, Jack came up with. I asked him to combine two random things and his answer was “skunk and dinosaur.” Voila!

Pack Tactics. The skunkasaurus has advantage on an attack roll against a creature if at least one of the skunkasaurus’ allies is within 5 feet of the creature and the ally isn’t incapacitated.

Spray Musk (1/day). The skunkasaurus sprays a toxic musk in a 15-foot cone. Each creature in the area must make a DC 10 Constitution saving throw. On a failed save, the target retches and can’t take actions for 1 minute. The target can repeat the saving throw at the end of each of its turns, ending the effect on itself on a success. A creature that doesn’t need to breathe or is immune to poison automatically succeeds on the saving throw.

If you like the skunkasaurus’ stat block, then get the word out by sharing it. Click one of the buttons below.

Skunkasauruses will be included as a Dungeons & Dragons Fifth Edition entry in a new book I’m working on for DMsguild.com titled, simply, CR 1/8.