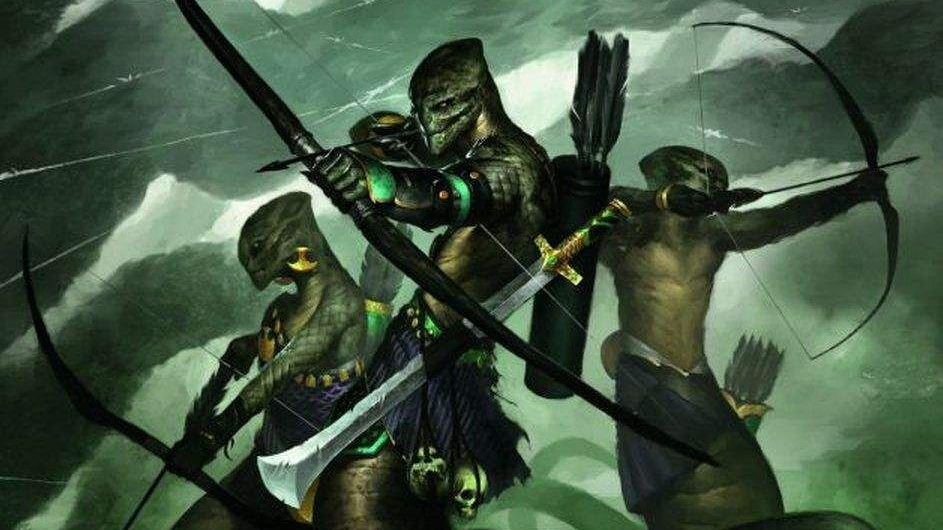 To the western end of Wicked Maple Grove at the neck of Centaur Wood, there stood a great tower in a swamp. Not much was known about the tower or its purposes other than that it once served as a stronghold for a mysterious race of giant serpentfolk.

The medusan arcanist Gothmog of Udum recalls that the serpentfolk came from another plane of existence. They busied themselves with one important goal: the eradication of elemental evil in all its varied forms.

The xiphonan were massive creatures, their torsos and heads easily the size of a hill giant’s. Fully uncoiled, the males’ lower bodies were nearly 100 feet in length; females were even longer, at 150 feet.

There are rumors that the serpentfolk ultimately destroyed themselves. Now the Ruined Tower of Gothmog of Udum (as it has become known) sits empty, rising high above the Orcmoor Mire, a reminder of the ancient times before the Ninth Kingdom.

Innate Spellcasting. The xinophan’s innate spellcasting ability is Charisma (spell save DC 10). It can innately cast the following spells, requiring no material components:

Constrict. Melee Weapon Attack: +7 to hit, reach 5 ft., one creature. Hit: 13 (2d8 + 4) bludgeoning damage, and the target is grappled (escape DC 18). Until this grapple ends, the creature is restrained, and the xiphonan can’t constrict another target.

The gigantic xiphonans are just one of the creatures unique to the crowdsourced Wandrossa setting. Each day, the patrons vote and suggest new ways to evolve this world. And soon, they’ll take on the role of Gods, where they can battle other gods directly for their interests.

It’s only $3 to become a Patron for DMDave. PLUS you get requests!