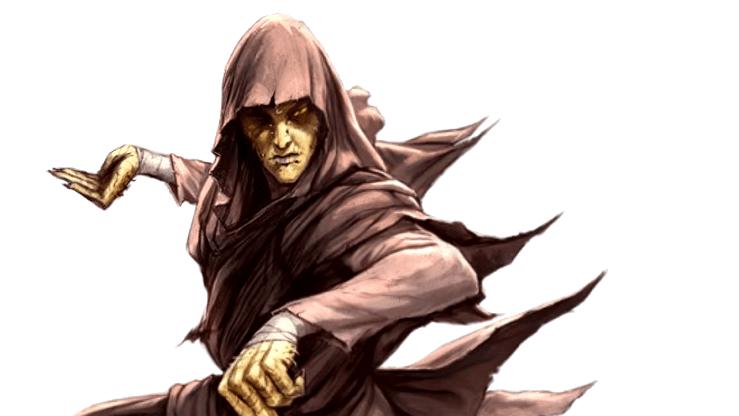 Recently, I got a request to create a “yuan-ti big bad” and I can’t for the life of me find the person who requested it. So I’m kinda running blind here.

Anyways, the idea that I got for this was to take this serpent person and make it into a badass monk. After all, I feel that monks are a little under-represented in the Fifth Edition monster/NPC books. It seems like most big bads are either big bad warriors, big bad priests, or big bad wizards.

Shapechanger. The yuan-ti can use its action to polymorph into a Medium snake, or back into its true form. Its statistics are the same in each form. Any equipment it is wearing or carrying isn’t transformed. It doesn’t change form if it dies.

Fist of the Cobra (1/day). The yuan-ti can empower its strikes with devastating ki energy. When the yuan-ti hits a creature with an unarmed strike attack, it can use its bonus action to deal an additional 22 (5d8) poison damage in addition to the unarmed strike’s normal damage.

Legendary Resistance (3/day). If the yuan-ti fails a saving throw, it can choose to succeed instead.

Magic Resistance. The yuan-ti has advantage on saving throws against spells and other magical effects.

Unarmored Defense. While the yuan-ti is wearing no armor and wielding no shield, its AC includes its Wisdom modifier.

Block. The yuan-ti can use its reaction to deflect an attack when it is hit by a melee weapon attack. When it does so, the damage it takes from the attack is reduced by 20. If this would reduce the damage to 0, it can disarm the attacker as part of the same reaction. The attacker must make a DC 17 Strength (Athletics) or Dexterity (Acrobatics) check (the attacker’s choice) or it drops the weapon.

Move. The yuan-ti moves up to its full movement speed.

Eye of the Serpent (Costs 2 Actions). The yuan-ti targets up to three creatures it can see and can see it within 30 feet of it. Each creature must succeed on a DC 16 Constitution saving throw or is stunned until the end of the yuan-ti’s next turn. While stunned by this effect, the creature has vulnerability to poison unless the creature already has resistance or immunity to poison.

This is a pretty stacked little critter but looks like tons of fun. A DM will have to some serious planning to make sure it runs right, and its lower than normal hit points are made up for by the fact that it’s got defensive abilities out of the whazoo, so study it well.

If you’d like to put in a request and get a whole slew of other benefits such as a FREE 57-page book, be sure to check out my Patreon.

Currently, my patrons are helping me build a cool campaign world called Wandrossa where anything goes. And we need your input! It’s only $3 to join in on the fun.

Become a Patron of DMDave, today!