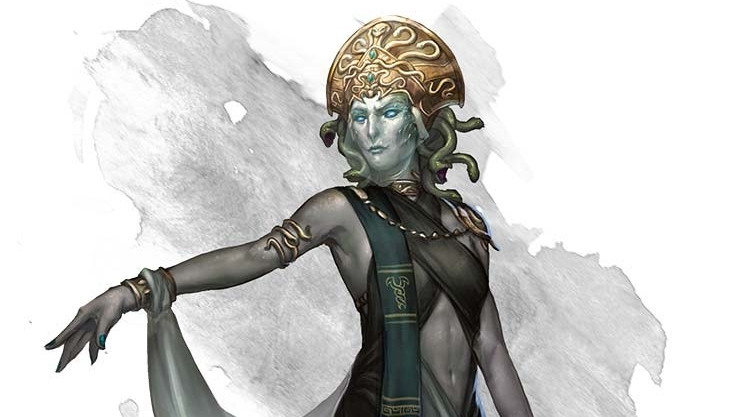 I always like a challenge when it comes to creating playable races. Recently, I created weretigers and vampires and I think I did a pretty good job of keeping within the theme (if I say so myself). Now, I have a request for a medusa playable race. How does one create a medusa playable race, keep it true to the lore, and make it balanced with the other races?

One of the best things about the medusa that’s in the Monster Manual is that under its Petrifying Gaze trait it states the following:

When a creature that can see the medusa’s eyes starts its turn within 30 feet of the medusa, the medusa can force it to make a DC 14 Constitution saving throw if the medusa isn’t incapacitated and can see the creature.

What’s important to note about this is that it says “can force it” which is technical language for that this power is optional. That makes the rest of the build pretty damn easy since that was the only real lump.

This race was pretty simple to come up with thanks to nice and neat stats in the Monster Manual. I had to nerf the petrification gaze a little, sadly, but otherwise, it would have been too powerful. With the use of an action, the ability to avoid the gaze, and the temporary nature of its effect, it should be fine. At 17th, you get the full bucket of petrifying gaze (still gotta use an action though, tough to avoid that).

Another regret was having to leave out the poison of the snake hair, but that would have been too powerful. I might add that in as a racial trait later on.

To round it out a little, I gave the race Wisdom (Insight) and it gets darkvision. Oh, and natural armor.

Nothing it can do is any better than the Lizardfolk race from Volo’s, so it should be nice and balanced.

Your medusa character has certain traits in common with all other medusas.

Age. Medusas are rare, usually created when a mortal sacrifices part of its soul to gain eternal beauty. For that reason, it matures at the same rate as most humanoids. However, a medusa can live a very long time often hundreds of years.

Alignment. Being vain creatures, medusas are often petty and selfish. They tend toward evil. However, they are also grand manipulators, fully capable of using systems and structures to their advantage so they often side with law.

Size. Medusas are about the same size and build as humans. Your size is Medium.

Speed. You base walking speed is 30 ft.

Darkvision. Not all of the medusa’s curse offers up disadvantages. You can see in dim light within 60 feet of you as if it were bright light, and in darkness as if it were dim light. You can’t discern color in darkness, only shades of gray.

Petrifying Gaze. Your look can turn other creatures to stone. As an action, you can target one creature that can see you within 30 feet of you with your gaze. At the start of that creature’s next turn, as long as you aren’t incapacitated and it can still see you, it must make a Constitution saving throw with a DC equal to 8 + your proficiency bonus + your Constitution modifier. On a failed saving throw, the creature begins to turn to stone and is restrained. The restrained creature must repeat the saving throw at the end of its next turn, becoming petrified on a failure or ending the effect on success. The petrification lasts for 1 minute, or until the creature is freed by the greater restoration spell or other magic. When you reach the 17th level, the petrification is permanent unless removed by magic, and if a creature fails its initial saving throw by 5 or more the creature instantly turns to stone.

Once you use this feature you can’t use it again until you finish a long rest.

Snake Hair. Your scalp is teeming with living snakes. You can use your hair to make melee weapon attacks with. If you hit with it, you deal piercing damage equal to 1d4 + your Dexterity modifier.

Languages. You can speak, read, and write Common and Infernal.

Get your requests made by DMDave when you become a Patron and get a 57-page book FREE!

This is a request from one of my patrons. My patreon starts at only $3 per month and includes a one-time request this size (usually a monster, feat, or magic item) in addition to all monthly PDFs that come out through the site (usually 50-70 pages of material).

In fact, sign up today and you’ll get one right away, FREE!