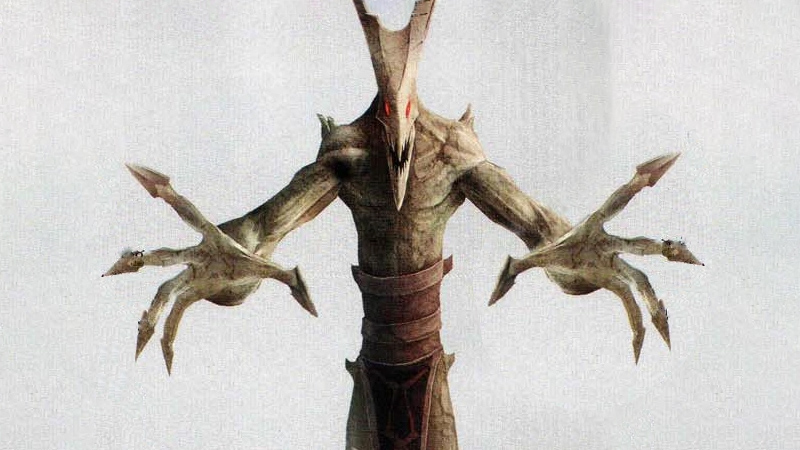 Other yugoloths may serve their employers and superiors as mercenaries, bodyguards, and torturers, but the battleloths literally serve as tools for their masters to exploit. Each of these creatures can take the form of a particular weapon, such as a sword, axe, or
crossbow. In this form, the battleloth can be wielded in combat by its master. In general, a battleloth is at its best when used to strike an opponent, then released to take humanoid form and continue attacking on its own. Although this tactic forces the creature’s master to draw a second weapon in order to continue fighting, some demons and devils consider the element of surprise worth the inconvenience of having to
carry an extra blade.

Battleloths are wily, cunning creatures whose allegiance can be purchased by the highest bidder at any time. Now and then a wielder comes to regret striking a bargain with a battleloth when opponents on the field bid higher for the creature’s services in the midst of a fight.

Battleloths love gold, gems, magic items, and other valuables. They are hard bargainers,
and they always insist upon receiving at least half their payment in advance. Both player characters and NPCs can employ battleloths. To contact and bind one of these creatures, a character must use the appropriate planar ally spell or hire a spellcaster to cast it on his or her behalf.

The weakest of the battleloths, arrow battleloths are sniveling, whiny, and prone to nitpick at the language of their contracts in an effort to avoid service. Most arrow battleloths consider serving as living ammunition to be the only combat duty required of them. Therefore, they often refuse to take humanoid form and continue fighting after being fired unless the target is an obviously weak opponent such as a wizard or sorcerer.

In weapon form, the arrow battleloth looks like a barbed-steel missile. In its true form, it resembles a brown-skinned, feathered humanoid with steel arrowheads set on its fingertips like claws.

Arrow battleloths are often hired to serve as spies. On such a mission, the creature inserts itself into a target’s quiver, then watches and listens, gathering all the information it can about the target’s strategies, plans, and comrades.
When drawn from the quiver and fired, the battleloth alters its course to land
out of sight, shifts into its humanoid form, and scuttles away to report back to its master.

Shapechanger. The battleloth can use its action to polymorph into a normal arrow or back into its true humanoid form. Its statistics are the same in each form. Any equipment it is wearing or carrying isn’t transformed. It reverts to its true form if it dies.

False Appearance (Arrow Form Only). While the battleloth remains motionless, it is indistinguishable from an ordinary arrow.

Living Ammunition (Arrow Form Only). When fired from a bow, an arrow battleloth can turn at any point in its flight to attack an opponent who had cover or concealment or was otherwise out of the bow wielder’s line of sight. As soon as the battleloth spots the desired target, it can use its flying ability to adjust its course, so long as it does not move beyond the maximum range of the weapon used to fire it. The attacker makes a normal attack roll against the target to see whether the battleloth hits, ignoring any miss chances or AC bonuses that would otherwise apply for concealment or cover. Otherwise, the arrow battleloth functions as a +1 arrow. Although it can turn into an arrow and fly on its own, an arrow battleloth cannot attack in arrow form without being fired from a bow.

Magic Resistance. The battleloth has advantage on saving throws against spells and other magical effects.

The arrow battleloth will be included as a Dungeons & Dragons Fifth Edition entry in a new book I’m working on for DMsguild.com titled, simply, CR 1/8.

If you like the arrow battleloth’s stat block, then get the word out by sharing it. Click one of the buttons below.