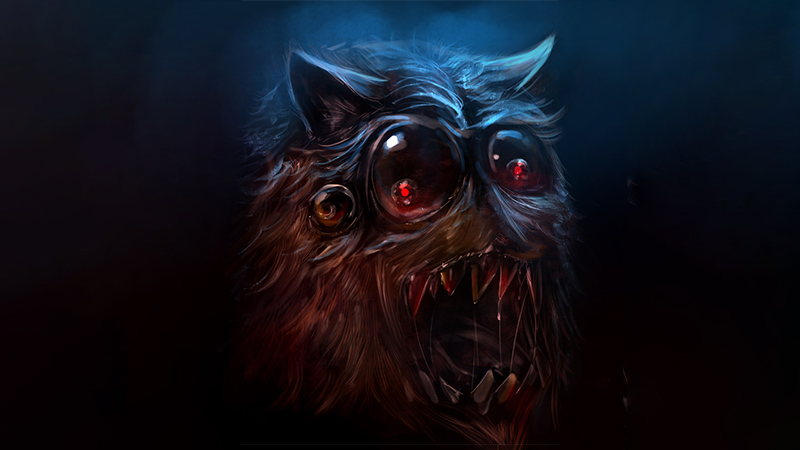 Cute from far but far from cute, nookas are deceptive unseelie fey creatures that lurk in dark forests, rotten swamps, and other forsaken areas. At first, they appear to be adorable woodland creatures, but when approached, their true nature is revealed: four spider-like eyes with a massive fanged maw at the center of a ragged ball of fluff. From there, they leap at their prey, hoping to latch on and worry it until it is dead.

And that’s not even the worst part; nookas never hunt alone. Where there’s one nooka, there’s probably ten or more waiting in hiding in the nearby water, under leaves, or on a tree limb just overhead.

A nooka appears to be nothing more than a ball of fur with a mouth. However, its tiny legs (there are four of them) are hidden beneath its fur. These legs help the nooka leap to bite and latch on to its victims.

Magic Resistance. The nooka has advantage on saving throws against spells and other magical effects.

Mimicry. The nooka can mimic any animal sound it has heard. A creature that hears the sounds can tell they are imitations with a successful DC 14 Wisdom (Insight) check.

Pack Tactics. The nooka has advantage on an attack roll against a creature if at least one of the nooka’s allies is within 5 feet of the creature and the ally isn’t incapacitated.

Bite. Melee Weapon Attack: +4 to hit, reach 5 ft., one target. Hit: 4 (1d4 + 2) piercing damage and the nooka attaches to the target. While attached, the nooka doesn’t attack. Instead, at the start of each of the nooka’s turns, the target loses 5 (1d4 + 2) hit points due to blood loss. The nooka can detach itself by spending 5 feet of its movement. A creature, including the target, can use its action to make a DC 8 Strength check to detach the nooka.

The nooka will be included as a Dungeons & Dragons Fifth Edition entry in a new book I’m working on for DMsguild.com titled, simply, CR 1/8.

If you like the nooka’s stat block, then get the word out by sharing it. Click one of the buttons below.