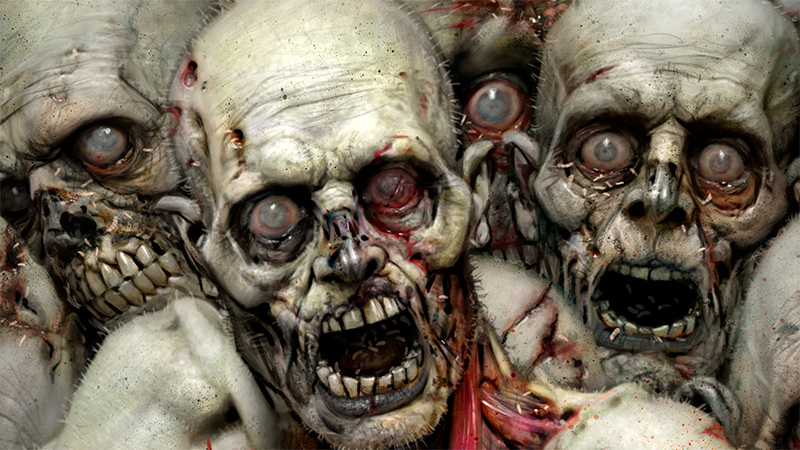 Dungeons & Dragons Fifth Edition has rules for swarms. But those rules seem limited (at least as far as the monster entries go) to just Tiny creatures. But what about mobs of creatures that are bigger than Tiny? Specifically, what about zombies?

Not too long ago, I created stats for a Black Friday Mob as a joke. But in all reality, it was some pretty decent mechanics. So with this entry, I thought I might expand on it. After all, if you’re going to run a Zombie Apocalypse Campaign Setting using Fifth Edition rules (ZACS 5e), then you’re going to need a lot of zombies. And rolling dice for every single little zombie will get old fast. Not to mention that the mob rules are meh at best.

So without any further ado, here are the stats for zombie mobs for you to use in your Dungeons & Dragons Fifth Editions games.

Flesh-Eating Compulsion. At the start of the horde’s turn, if a creature that is not undead or a construct shares the same space with the horde, the horde is incapacitated and the creature is engulfed. The engulfed creature is restrained, takes 36 (8d8) piercing damage at the start of each of the horde’s turns, or 18 (4d8) piercing damage if the horde has half of its hit points or fewer, and must succeed on a DC 19 Constitution saving throw or become infected with zombie bite disease. The diseased target can’t regain hit points, and its hit point maximum decreases by 10 (3d6) for every 24 hours that elapse. If the disease reduces the target’s hit point maximum to 0, the target dies, and it raises as a zombie in 1d4 hours. The disease lasts until removed by the lesser restoration spell or other magic.

An engulfed creature can try to escape by taking an action to make a DC 24 Strength check. On a success, the creature escapes and enters a space of its choice within 5 feet of the horde.

You’ll see some more zombie stuff coming down the pipeline while I put together the rules for ZACS 5e. If you have suggestions or anything that you’d like to see in the game, let me know down in the comments below.