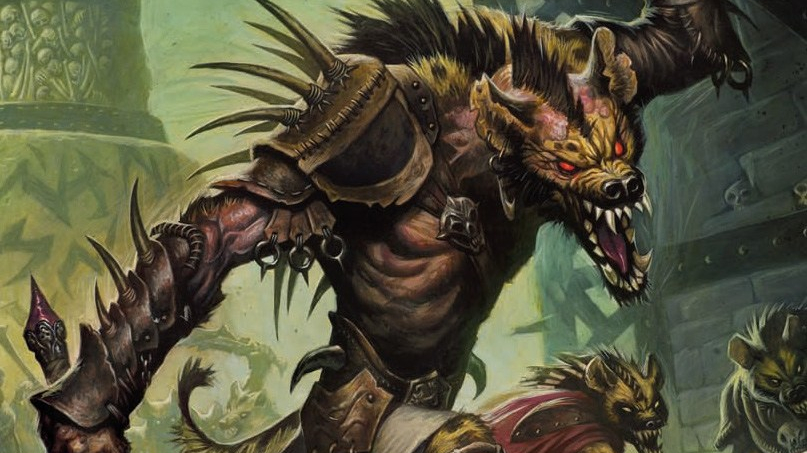 A big part of being a creative is accepting criticism. And as someone who dabbles in the world of creating new game mechanics, I receive plenty of criticism. Like, a lot. Plus, I post to Reddit, too, because, well, I’m a masochist, I guess.

Anyways, I thought I might share a funny list of 10 of the most broken things ever in D&D–created by the game’s own designers, Wizards of the Coast, mind you–that make my stuff look tame in comparison.

This one comes from Volo’s Guide to Monsters and it’s always my fallback for broken ass races in D&D (ie, “if you think that’s broken, then check this out!”

If I made something like this and posted it on Reddit, it’d be downvoted into oblivion. But there it is on page 120 of Volo’s.

So, for just 8 gp you can get yourself a donkey. What does a donkey do? Well, once you’re mounted on it, you can get it to move plus give it the Dodge, Disengage, or Dash action. And does this cost you an action? Nope. A bonus action? Nope. That’s right. You can effectively increase your per round speed by 80 ft OR give all your enemies disadvantage on attacks against you OR avoid attacks of opportunities after making an attack.

WITH. A. FUCKING. DONKEY.

And that’s not all! It gets better! If you use the 2nd-level paladin spell find steed to create said donkey, it can also act independently and make attacks, too. Joy. Throw in the mounted combatant feat and you have ADVANTAGE AGAINST CREATURES SMALLER THAN THE STEED. But donkeys are medium? Fine. Change it to a warhorse (you can do that).

I hate mounted anything in D&D and I will go out of my way to kill your animal. True story.

The most broken spell in the entire game is banishment. Why is it broken? Let’s say you’re an 8th-level character that’s prepared the banishment spell. And suddenly, you’re face to face with a goristro (they’re kinda like big, CR 17 minotaur demons).

And they don’t come back from it either. Nope. Pop! All gone. One shot kill. Suddenly, the party is rewarded 18,000 experience for a single 4th-level spell slot.

Recently, I worked out using the rules from the Dungeon Master’s Guide and Xanathar’s Guide to Everything that selling monster body parts to magic item crafters can be quite a lucrative business. So lucrative, in fact, that you could potentially double the loot haul of a dungeon just by selling the severed limbs of the weirdo monsters you run up against.

Okay, arguably, this is totally up to the DM. But check out the math yourself and you’ll see it’s right there in the RAW.

#5 – Barbarian Path of the Zealot

Every time I see this thing it blows my mind that this exists as an “official” subclass. First, you get to deal extra damage on each of your attack that’s going to be an average of 3.5 at first level and goes up by 1 every 2 levels. There are a few things that are broken about this. First, it’s radiant, and unless you’re fighting a celestial for some reason, there’s nothing that has resistance against radiant. Second, there’s no downside. With frenzy, you take a level of exhaustion when you hit with your bonus attack. Not the case with divine fury. And that’s just the first HALF of the 3rd level benefit. The other 3rd level power allows clerics to bring you back to life with no material components! What the everliving hell?

Next, you can reroll saving throws once per day at 6th level. At 10th level, you can give every creature within 60 feet of you advantage for one turn. And then at 14th level, dropping to 0 doesn’t kill you as long as you’re raging.

This one comes out of Eberron’s Unearthed Arcana and the Wayfarer’s Guide to Eberron. The old warforged race, once updated for 5th edition, are totally whack daddy brokedy broke.

First, they have crazy resilience, giving them dwarven poison resistances, immunity to disease, no need to eat, drink, or breathe (that last one is a huge one), and they don’t suffer exhaustion from lack of sleep.

That block in itself is probably good, but nooo. We gotta go deeper.

Next, they have free built-in armor so long as they’re proficient in the armor types. They get to add their proficiency bonus, too and can SWITCH THE TYPE after a long rest. So a first level warforged with a shield has an AC of 20. There is literally no other race/class combination in the game that can start with an AC that high. Only a martial class wearing full plate (which costs 1,500 gp, mind you) can do that at first level.

Oh, and by the way, this is even before the subclasses get worked in.

I have a theory that a rogue, when played right, is the most broken damn thing in the whole game. How do you play a rogue right? It’s simple. Move. Hide. Shoot. (Or some combination thereof). Repeat.

Of course, you have to build it right and make sure that you buff the hell out of your Stealth with Expertise. That means at first level, you can have +7 to your Dexterity (Stealth). The types of monsters you’ll be facing at that level all have pretty low passive Perception, so it’s unlikely they’ll see you. And if you’re in lightly obscured conditions such as dim light (which is basically every dark dungeon in the world) the creatures will have a -5 to that passive Perception check, effectively giving you +12 to your Stealth checks.

Now, that in itself would be fine, but keep in mind that when a creature can’t see you, you get advantage to your attack roll. So now you basically have a +5 to your attack which is already going to be +5. So that’s a +10.

But wait, there’s more! When you have advantage on your attack rolls you get to add sneak attack damage (2d6). So there you are, Mr. 2nd-level Rogue, armed with your short bow dealing an average of 13 damage every single turn from up to 80 feet away.

And that’s just second level. There is literally no other class that has that sort of damage output AND defensive capabilities that early on.

Next, there are those who are maximized for Perception. It’s pretty simple to do, too. In fact, we can even do it with the aforementioned stealth rogue. Let’s say that you have a variant human rogue that, for whatever reason, decided to throw a 14 into its Wisdom (probably a good idea anyway since Wisdom saves are going to be the one glaring weakness that you have) and you add the +1 racial bonus to it. Then you decide to make your Perception one of your expertise skills (along with Stealth, of course). Then you take the Observant feat. That gives you another bump in Wisdom, putting you at 16. So now you have a Perception bonus of +12 (+2 proficiency, +2 expertise, +3 Wis, +5 observant feat). That means your passive Perception is an incredible 22 at first level.

Why does this break the game? Because absolutely nothing is hidden to you. So not only are you the world’s best stealth machine (see #7) but nothing can hide from you either. Plus, you can see all secret doors, detect most traps, and pretty much just bust every single low-level dungeon ever made.

Hey, did I mention that rogues are broken AF? Because they’re broken AF.

Oh boy, what a big ol’ can of worms Wizards opened with this Unearthed Arcana Sidekicks rules supplement. Now, keep in mind, sidekicks exists for a) small groups and b) DMs helping out their kids who don’t fully understand how to fully optimize their players.

Having said that, yeah. Sidekicks are probably the most broken fucking thing ever to come out of Wizards of the Coast. Not only do they essentially double EVERYTHING about your characters, but they also make animal companion rangers pointless as hell.

Now, keep in mind that sidekicks are supposed to earn experience, too. So they’ll never be as good as having a fully functional party member with you. But if you use these rules in your campaign for any reason other than the two situations I mentioned above, then yes. They’re broken.

Okay, this one is a bit meta. But I think it bears explaining. When you’re a game designer, you’re also a marketer. It’s true. And that means when you’re creating something, especially an expansion to previous rules, you have to give people a reason to buy it/pay attention to it. You do this by making the content in new material slightly more powerful than the content in the original/previous material.

Example: the class options in Xanathar’s. Sure, there are a few exceptions (mostly the “roleplaying” subclasses like Rogue Mastermind), but overall everything in Xanathar’s is marginally better than the content in the Player’s Handbook.

This is 100% intentional. Because if it wasn’t slightly broken, it wouldn’t generate as much excitement/interest and nobody would buy it.

In fact, this phenomenon has a name: codex creep. Now, Wizards will tell you until they’re blue in the face that there’s no such thing as codex creep, but I can tell you as someone who constantly creates content for this game that if it ain’t slightly broke, people don’t give a fuck. Because broken shit gets comments. It starts discussions. And in our algorithmic-driven, social media world, comments get attention.

So, yes, true believers. Every single book from now until the end of this edition (and yes, this edition will end someday) will be a little more broken than the last. Because as much as any of us hate to admit it, Wizards of the Coast is here to make money. And with this edition, they really know what the hell they’re doing.

Remember this one last thing: it’s a game. And it’s a game refereed by a single individual, the DM. Ultimately, it’s the DM’s choice what goes into the game and what doesn’t. If the DM feels like something is broken, they don’t have to put it in there.

But a good DM is one that allows his players to do whatever the hell they feel like and adjust accordingly.

That’s my philosophy. Might not be yours. Either way, let me know what you think down in the comments. And PLEASE PLEASE PLEASE share this post if you dig it.