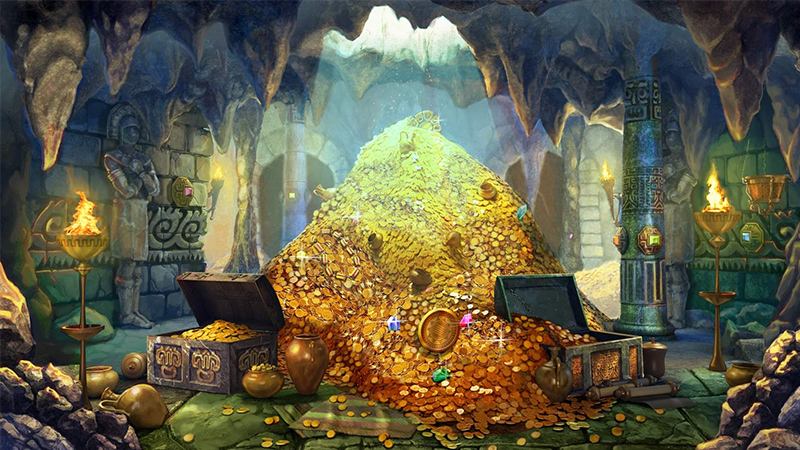 Recently, I wrote up an article about the kinds of monsters that you can throw at your players to make them hate you. This time, I want to take a look at ways to drive your players nuts without using monsters at all.

#1 – The Secret Door That Isn’t There

I got this idea from Dyson Logos. Recently, he created a map that has a huge curving hallway that seems like it’s going around a massive round room. Only trouble is… there’s no room there.  But the players will think there’s one there and will constantly search for a secret door that doesn’t exist. Just try to contain your laughter while they argue and perform search check after search check.

#2 – A Treasure Chest in the Middle of an Otherwise Plain, Empty Room

No monster. No decorations. Just a plain room. With a treasure chest in the middle of it. That’s it. What’s in the chest? Eh, that doesn’t matter. What will matter though is the players being careful as hell to not set off traps (that aren’t there) or fight off mimics (that aren’t there) or whatever else their meta-paranoia can come up with.

Climbing checks are the bane of every players’ existence unless they’re a monk or rogue. Wizards usually dump in Dexterity and Strength, so unless they prepared a fly or spider climb spell, they’re going to grump about it the entire time. To make it even worse, make it so the vertical passages lead into dead ends just beyond their line of sight.

#4 – Treasure That’s Too Heavy to Carry

100,000 in copper pieces just sitting in the middle of a room. That’s about 2,000 pounds worth of treasure right there. Even if the party has five characters with maxed out Strength that are totally naked, they could only carry 1,500 pounds. And is that worth it for what amounts to only 1,000 gold pieces?

#5 – Anything from Page 110 of the Dungeon Master’s Guide

If you know what I’m talking about you’re probably already smirking. Page 110 of the DMG includes rules for Extreme Cold, Extreme Heat, Strong Winds, Heavy Precipitation, as well as Wilderness Hazards. Throw enough of those at your players and they’ll surely hate you.

#6 – A Dungeon with a Name That Overhypes It

Consider calling your mundane dungeons things like “Lair of the Ten Surly Beholders” or “The Nest of Dragons” or “Temple of the Elder Lich.” Sure, the backstory might supply the idea that those places were once dangerous, but imagine how freaked out your players will be while they’re crawling through ’em, terrified of a BBEG attacking at any moment.

This one is a little meta, but it’s fun to sometimes ask for Wisdom (Perception) checks for no reason. Or hell, just ask people what their passive Perception scores are. That’ll get them. Or the old “hey, such-and-such, remind me what your character’s AC is again?” Add to the theatrics by rolling a die or two, doodling something, then looking back up with a blank expression. A blank expression is always scarier than a smirk, chuckle, or surprised look, by the way. They think you’re trying to keep a poker face.

I think this one explains itself.

Throw in situations that aren’t easy to deal with. The dungeon is populated by a bunch of kids who are being mind controlled by a hag (did that one once). Or there are goblins, but they’re all old and/or injured. Do something that makes the characters question their own morals and ethics. Bonus points if you can get the players to question their own morals and ethics.

“Oh, sorry, guys. Looks like you were a day too late. The Order of the Scarlet Dagger got there first and cleaned the place out.” Of course, they only discover this after they spend four hours combing through every nook and cranny looking for monsters, treasure, or something–anything!!–to make the delve worth their while.

Bonus: When they’ve dropped their guard from the pre-looted dungeon, then, and only then, do you throw something heinous at them.

Help us find more fans by sharing on Facebook!

I love my players. I do. But I also love tormenting them. But clearly, they’re masochists since they keep coming back for more.