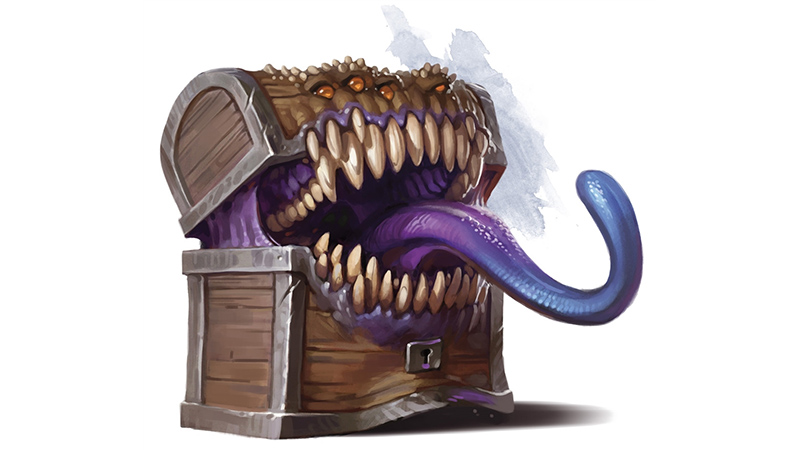 Gary Gygax was a genius. Duh. We all know that. But I’m pretty sure that even the grandmaster had some players that got on his nerves. After all, why would anyone in their right mind create something like a mimic or a rust monster?

If you’ve got troublesome players who think they can just smack their way out of every possible encounter, here’s a list of 10 Dungeons & Dragons Fifth Edition monsters that you can throw at your players to keep them in line. They’re not the most dangerous things in the game, but they sure are fearsome.

Still, not only are treasure-chest-shaped mimics horrible creatures once encountered, but they make your players paranoid of any treasure chest (mundane or otherwise) they encounter from that point forward.

And if you want something really awful that’s like a mimic, check out the monster my son, Jack created, the Rither.

Did you know that the rust monster came from a bag of kaiju monsters that Gary Gygax purchased at a toy store? True story! Thanks to that little purchase, rust monsters have been tormenting players for damn near 40 years. Nothing like having all your players’ expensive arms and armor gobbled up within the first few minutes of setting foot in a dungeon.

For a higher level challenge that can screw up your players’ arms and armor, check out the Junk Golem. It actually breathes a gas that destroys metal!

The eff-you monster to end all eff-you monsters, helmed horrors are probably the personification of a Dungeon Master’s ire. Let’s look at the facts here. They’ve got a criminally high Armor Class of 20, can fly, resistant to most normal attacks, immune to force damage (wtf?), immune to practically all conditions, resistant to magic and also have immunity to common spells. Sure, they only do 16 points of damage per turn, but their defensive abilities are so high that won’t matter. These guys win the Asshole Monster of the Year award, in my book.

The classic! Cubes are tricky to use. If the PCs can see it coming, they’re going to move out of the way. But if you can surprise them with one hiding behind a corner, or drop one from a ceiling, they can be quite effective. Give yourself a goal: see how many PCs you can catch using one cube. My current record is four.

No matter what level your PCs are, they’re never going to be ready for something that’s invisible. And that’s why Invisible Stalkers make such great jerk monsters. I recently had the enjoyment of using two against my PCs (who are level 9, mind you), and I beat the heck out of them to the point where they just started randomly fireballing the entire room.

Oh man, I love being a naughty DM.

Here’s another jerk monster. Your PCs won’t even see the bloody thing until they’re walking under it and then bombs away! Here comes a little slug that has the ability to deal freakin’ 21 damage in one shot. And the best part? They’re only CR 1/2 monsters, so you can deal a bunch of damage and still not have to dish out a bunch of experience to your punk players.

I’m not sure if fire elementals were always this assholey, but in Fifth Edition they sure did get an upgrade. In addition to their normal fire damage dealing touch attacks, a fire elemental can literally run through the space of another creature and set it on fire–without allowing for a saving throw!

Now consider this: a fire elemental using Dodge or Disengage, then running back and forth. With 50 feet of movement, they’re going to be pretty hard to get a hold of. And they’re smart enough (Intelligence 6) to use some basic strategy. The best part? The PCs will have to blow their action economy to put themselves out.

If you’re looking for a lighter challenge that can do sort of the same, check out the flame fish I created for my CR 1/8 series.

I ran Lost Mines of Phandelver with my current group back in March. Perhaps my favorite part of that entire adventure was the flame skull encounter. As a Challenge Rating 4 monster, these guys are tough as hell, especially to a party of 4th-level adventurers. They can fly, are resistant or immune to most magic damage types, and can lob fireballs.

Bonus points if you give it a funny voice when you throw it at your players (I did a Beetlejuice voice).

Shadows in Dungeons & Dragons Fifth Edition are a throwback to the good ol’ days when monsters could do stat damage instead of just hit point damage. On top of that famous feature, they’re also stealthy AF which means they’re likely to get the drop on the PCs. Plus, they’re resistant to almost every type of energy type. At CR 1/2, these guys are a pain in the neck and will ruin a party’s tanks in a heartbeat.

Rounding out the list, we have the fat, mosquito-like buggers, the stirges. Stirges always come in mobs and they always come hungry. At CR 1/8 with, like, only 2 hit points, I don’t even make my PCs roll for damage. They just auto-squish. Still, they can put fear into PCs as a mob of ten of the things are sure to get through even the toughest tanks’ armor.

Plus, they’ll eat up high-level spell slots while your wizard is screaming “get it off me, get it off me!” throwing fireballs to get rid of ’em.

These are all monsters that I’ve used in my campaigns to great effect. It’s my belief that the sign of a good monster is one that creates a memorable experience more than something the characters have to smack smack smack until it’s dead.

What monsters give you the heebie-jeebies? And if you’re a Dungeon Master, which ones do you like to torment your players with?

Let me know in the comments below!