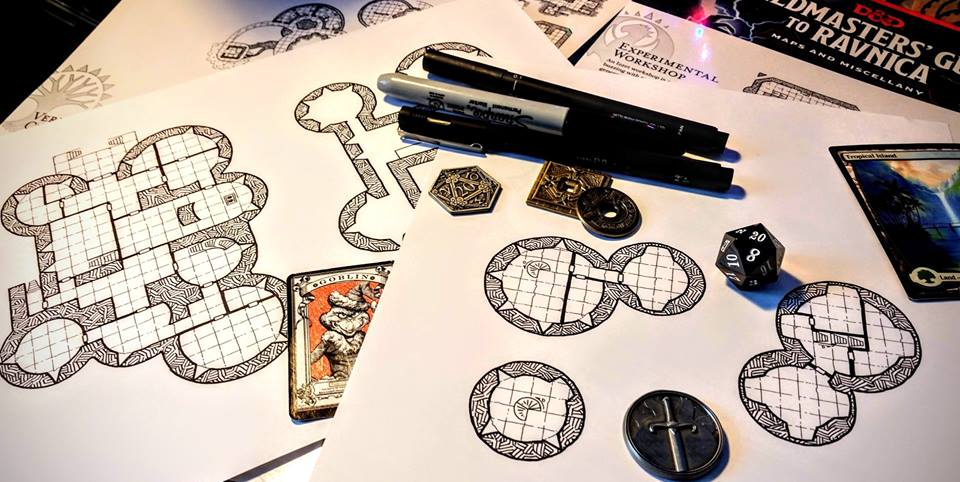 Hey all! Happy Sunday! Hard to believe it’s just two more days until Christmas. Hope someone got me something nice like one of those gold death knight rings over on Death Saves. 😛

Kidding. But for real, I will take one of those beholder pins. Sucka nice.

Anyways, I thought I might throw out some cool news and other info I learned while bouncing around the interwebs this week. Hope you think it’s cool, too!

If you aren’t following Wizards of the Coast’s blog, you should. They do a series called Unearthed Arcana where they test out new rules. These rules typically give way to official rules that appear in books and usually hint at what’s coming down the turnpike for the brand.

This week, WotC released rules for sidekicks. Basically, this edition of Unearthed Arcana rules give you the rules you need to have a town guard hang with you or a dog or, well, whatever the hell you feel like (and that the DM won’t hate you for). Not only does it give rules for running such a character, but you can level it up, too.

Okay, this is one I kinda geeked out over a little too hard. Many of you know that I ran my current group of PC’s through the infamous Lost Mine of Phandelver module. If you’ve run through it, too, you might remember that there’s a castle in the middle of the adventure called Cragmaw Castle that’s infested with gobbos, gricks, and all sorts of other uglies.

Dyson Logos, an official Wizards of the Coast cartographer whose work has appeared in two of the last three releases, is actually redesigning Cragmaw Castle. And not only that, but he’s doing the past version of the castle before it was destroyed. He hasn’t posted it up on his blog yet (where he offers, like… all of his maps for free), but he has been showing off the work on his Facebook page.

#3 – Deborah Ann Woll is getting her own D&D show on Geek & Sundry.

Deborah Ann Woll of True Blood and Netflix’s Daredevil fame is a huge D&D nerd if you didn’t already know. So big, in fact, the folks over at Geek & Sundry have got her making her own Dungeons & Dragons-themed showed called Relics & Rarities (damn, that’s a lot of ampersands).

And that’s not all; it’s actually her working as a Dungeon Master in a world of her design that boasts its own elaborate sets, props, and other cool adventure goodies with each and every adventure. Uh, slide the hell over Matt and the crew, I’m pretty sure this is gonna whoop ol’ Critical Role’s butt.

Check out the trailer for the new show over on Geek & Sundry.

#4 – The Core Rulebooks were Christmas favorites on Amazon.

If you all didn’t already know, I am a professional writer for a tech company. That tech company, Jungle Scout, does data science for Amazon. And while my co-workers know that I’m a huge D&D nerd, they also know that D&D is having one of its best years ever. How do we know that? Because all three of the core rulebooks are actually in Amazon’s Top 25 best-selling books for the month of December! Considering that the current version of the game has been out since 2014 or so, that’s a pretty big deal.

The Player’s Handbook actually cracks the Top 10 at #8, with the Monster Manual at #19 and Dungeon Master’s Guide at #22. Each one is selling an estimated 900+ copies per month just on Amazon alone! Way to go, WotC folks!

#5 – The Secret of Forsaken Peak announced.

Yeah, of course, this is obviously tooting my horn, but hey. That’s what this whole blog is for. And this is a big deal! If you haven’t heard by now, myself and Justin David Russell are hard at work on The Secret of Forsaken Peak, a new Fifth Edition horror/dark fantasy adventure setting.

It’s a massive 6-level megadungeon with 750+ areas taking characters from level 5-20. In addition to the dungeon itself, there’s going to be 150 new monsters, new player options for every class, magic items, and more.

The Kickstarter is due out in February, but you can get the first part of the adventure for FREE by signing up to the Secret of Forsaken Peak newsletter. It’s an 18-page adventure that takes place in a cannibalistic goblin tribe’s mine.

Get the FREE adventure now.

For more news, free monsters, adventures and more be sure to optin to the mailing list. You can use the form on the right sidebar or down in the footer.

Take care and see you next time!