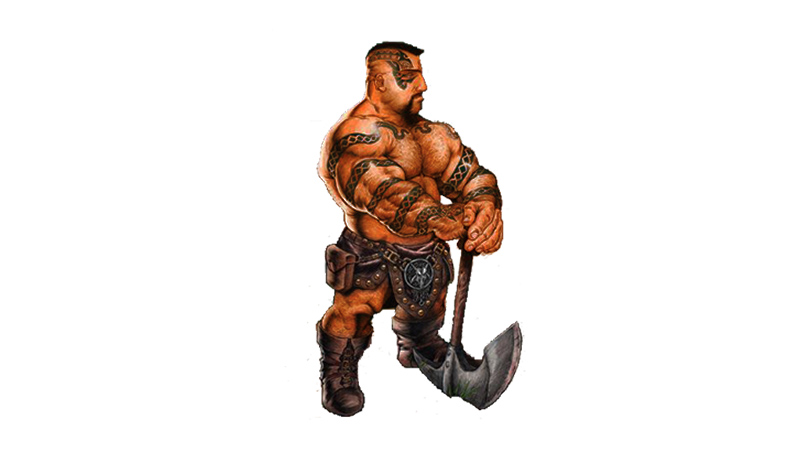 An alux (plural: aluxo’ob) is a short, stout humanoid hailing from the southern reaches and jungles Alberia. Aluxo’ob are the natural protectors and miners of heartstone (la piedra de corazón), defending the rare element and its mágico.

When the Lejodores sailed across El MarQue Bosteza and conquered the Aztec nations to the north, the aluxo’ob revealed themselves to the southern tribes, offering the secret of the heartstone. With this magic, the Alberian people halted the expansion of the Lejodores. For this gift to mankind, aluxo’ob will forever be held in high regard.

Aluxo’ob are rare. It’s unusual for more than two or three at a time to appear in any one place. Some believe that the aluxo’ob life forces are tied directly to heartstone. And over time, as the humans and zules of Alberia began to deplete the precious mineral, aluxo’ob disappeared along with it. In truth, aluxo’ob prefer to stay hidden from most of the world, making their homes in the dense jungles of Cueva and the Surlands.

Of all the humans, Cuevans have the strongest relationship with the aluxo’ob as Cuevans have displayed the overall highest degree of respect to heartstone magic. It is rumored that the Cuevan city of Nata hides a underground city of aluxo’ob and that a massive source of heartstone–bigger than any that’s ever been seen by human or zule eyes–lies at the core of this complex.

Dwarven Resistance. The alux has advantage on saving throws against poison.

Dwarven Resistance. The alux has advantage on saving throws against poison.

Spellcasting. The alux is a 5th-level spellcaster. Its spellcasting ability is Charisma (spell save DC 13, +5 to hit with spell attacks). The alux has the following sorcerer spells prepared:

Aluxo’ob are part of the Mesoamerican fantasy campaign setting I’m creating for Patreon. Half of the content for the setting will be free here on the blog and the other half on Patreon (some of which will be free there, too).

The playable version of Heartstone Dwarves are currently on Patreon. It’s a dwarf sub-race. Check it out! Note: you must be a patron to view.