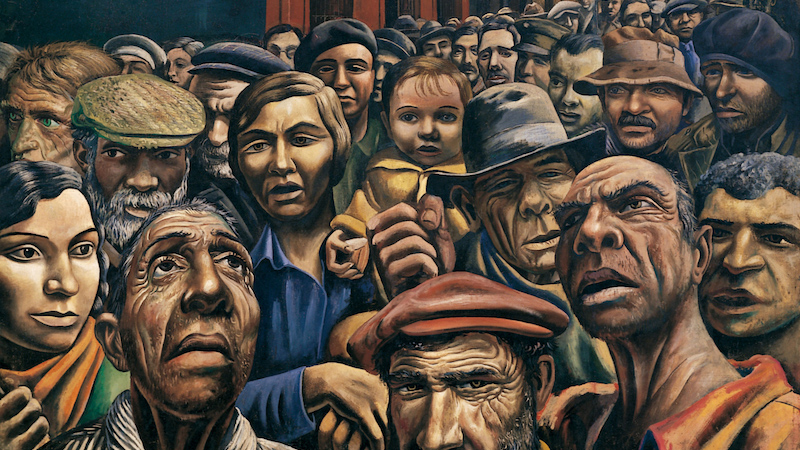 Humans make up the majority of the sentient species living on the continent of Alberia, hence the term humanoid (although, zulish scholars would argue that they were the true race of origin). It’s hard to pinpoint common human traits, however, many anthropologists agree that the single defining characteristic of the human race is ambition. While living relatively shorter lifespans compared to those of the zules or even the mysterious duendes and aluxes, humans make their mark on the world known.

In Alberia, humans typically have skin that ranges from olive to nearly black, and hair colors from dusty brown to near black. Almost all humans in Alberia have dark eyes, although green and hazel can be found, especially in the northern Mexjicano populations. Humans stand roughly 5 feet to 6 feet tall and weigh between 125 to 250 pounds, with men weighing more. Facial hair is common among men, and how it’s styled depends on the region of Alberia the human hails from.

Humans are adaptable in all environments, and Alberians are no different. They possess a wide range of skills and do not seem to favor any one scholarly or physical pursuit over another. Culturally, humans show variety as well. Some Alberian coastal and rural villages never grow beyond a few hundred people, preserving their traditions for hundreds of years. While some of the massive metropolitan areas such as Tenochtitlan and Tikal offer a wide range of cultures and experiences appropriated from powerful past conquerors such as the Lejodores from across the MarQue Bosteza or the pale elves of Vårtheim.

Because humans don’t live as long as duende or the elven races (particularly zules), they’ve found success in creating orders and organizations to preserve long-term goals. The most popular organization among the Alberian people is that of the Universal Church of Jesucristo (Iglesia Católico de Jesuscristo), a martyr God appropriated from the Lejodores, whose faithful see him as the savior of their sins.

Alberia (which is the Mexjicano-Common word for “Land of the Dawn”) is divided into eight regions, also known as El Ocho. Those regions are Balix, Cueva, Cuzcatl, Maya, Mexjica, Nahua, Niquaro, and Tecuan.

Because their descendants are not originally from the Alberian continent, the Balixi (also called Baymen) are the fairest of all the Alberians. They possess tawny-skin and brown hair that can range from nearly black to blonde. In addition, a larger portion of Baymen have blue or green eyes than the rest of the Alberian population. And they tend to be slightly taller and thinner, as well.

At the furthest southern point of the Alberian continent are the Cuevan people. Cuevans are a little darker skinned than most Alberians and tend to be a little shorter on average.

Cuzcatl is a small region of mostly coastal villages that stretches across the Mar Siempre. Like much of southern Alberia, the Cuzcatli people are descendants of the tribes native to the area. They’re shorter, with darker skin, although not as dark as those in the Surlands or even the Cuevans.

Mayans are one of the oldest empires of Alberia. Unlike the once great Aztec civilization of Mexjica, this powerful civilization managed to avoid conquest by the Lejodores hundreds of years prior. Mayans are taller and broader than most other Alberians. They frequently tattoo and paint their skin, and often display their wealth (even those who have less than others).

Mexjica is the largest and most populated region of El Ocho. Thanks to a long, storied history of conquests from foreign invaders, the Mexjicanos are a diverse blend of Alberian people. They can even have traits in common with Baymen and Lejodores such as blue eyes or blond hair.

The remnants of the Aztec civilization of old, before the conquest of the Lejodores, are found south of Mexjica in the Alberian region of Nahua. Like the powerful Mayans, Nahuans have preserved much of their culture and dress accordingly. They are lighter skinned the people of the regions further to the south and tend to be taller and thinner.

Niquaro is another civilization that escaped the conquest of the Lejodores. Unlike the Mayans and Nahuans, the Niquaroans have adopted the cosmopolitan habits of the Mexjicano people, thanks to their open ports and friendly attitude towards the MarQue Bosteza Islanders, Zule, and Balixi. They share similar qualities to the Nahuans, standing taller and thinner than most other Alberians. Niquaroans have no preference towards names and choose those they enjoy the best, typically a combination of Mexjicano or Nahuan.

Not to be confused with the feline humanoid race of the same name, the tecuani humans are those that live just south of Mexjica. Like the Mexijicanos and Niquaroans, the Tecuani accept multiple cultures, although, they tend to display their ancestral heritage a bit more than the people from the other two nations. Most tecuani look similar to Mexjicanos, although some on the southern reaches of the region appear to have Cuzcatli traits, as well. The Tecuani do not take surnames, instead preferring to change the appending syllable on their given name to represent their heritage. For this reason, Tecuani names tend to be longer than those of the other Alberian people.

Humans are probably the most diverse and adaptable of all the races of the Alberian continent. Your human has these traits.

Humans share the same traits as those found in the Player’s Handbook (including the Variant Humans).

Be sure to check out the Patreon page. For just $3 per month, you get daily, exclusive content not available here on the site or anywhere else. In addition, once per month all of the content from Patreon and the blog will get turned into a book which all patrons get for free!