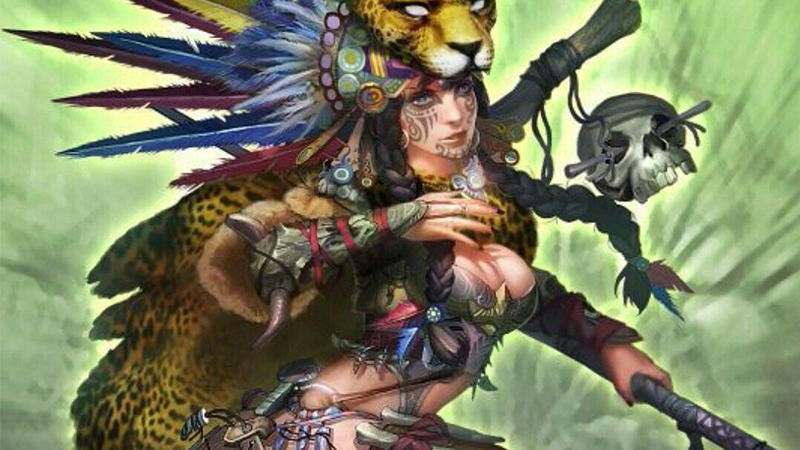 In campaigns that take place in Alberia, the only races available to play are as follows:

However, a variant campaign may include other races from the Player’s Handbook.

Here are ways to work in the other races from Fifth Edition Dungeons & Dragons:

Dragonborn. While dragons do exist in El Ocho, they do not play the same role that they do in most other Dungeons & Dragons Fifth Edition campaigns, and they never mix with humanoid races. Dragonborn do not exist. However, kobolds are a type of duende that could be played. If you wish to play a kobold, use the racial rules from Volo’s Guide to Monsters.

Dwarves. Aluxo’ob are the dwarves of El Ocho. However, hill dwarves could be an offshoot of aluxo’ob that live further north, particularly those in Mexjica that have adopted the cosmopolitan atmosphere of the major cities or the rural life of the smaller states. In fact, some of these aluxo’ob may have even taken a liking to lucha libre, thanks to their higher than normal Constitution and improved toughness. And mountain dwarves could be a pale, fiercer version of the aluxo’ob living north of the Rio Norte, among the zule. Once guardians of the heartstones of Vårtheim, they’ve since lost their attunement with magic and now rely on industry.

Elves and Half-Elves. The pale elves of the cold, northern lands beyond the Rio Norte known as the zule are the elves of El Ocho. The other races of elves from the Player’s Handbook and other supplements might work within an El Ocho campaign setting. However, these sub-races would be extremely rare, and most likely the product of a zule breeding with humans (which typically doesn’t produce offspring). High elves would be half-zules that live closer to metropolitan areas whereas wood elves, also half-zule, would live in the jungles and forests of the southern regions of Alberia. Drow and half-elves are non-existent in El Ocho.

Halflings and Gnomes. Instead of being two individual races with their own sub-races, halflings and gnomes instead are seen as “sub-races” of duende in El Ocho. The lightfoot halflings are known as duendes cautelosos. They hail from the northernmost parts of Alberia (specifically Mexjica) and have the fairest skin of all the duendes. Stout halflings are called gorditos, which are a duende sub-race that tends to be heartier (aka fatter) than their nature-bound cousins. Gorditos hail from Tecuan. Forest gnomes do not exist and are replaced by the basic duende race. Finally, rock gnomes are known as corazón duendes, as they possess a strong connection with the magical heartstone. Corazón duendes live all over Alberia, and even in parts of Vårtheim where their tinkering ability is highly sought after by the zules. In addition, the duendes furtivos (basically, the goblins of El Ocho) are playable using the goblin racial traits from Volo’s Guide to Monsters.

Half-Orcs. While orcs and half-orcs do exist in El Ocho campaign setting, they are extremely rare in Alberia. After all, orcs are a genetic mishap created by the zulish experimentation. Thus, an orc or half-orc character in Alberia would be met with extreme prejudice, and zules would ruthlessly pursue and murder these monstrosities the moment they saw one.

Tiefling. Any faithful follower of Jesucristo will tell you that, yes, the devil does exist in El Ocho, and his progeny are all around. Unlike other Fifth Edition Dungeons and Dragons campaigns, tieflings (known as Hijos del Diablo in the Mexjica-Common tongue) are never welcome in the majority of the settled world. The zules of Vårtheim might accept them into their midst, as would some of the friendlier coastal people of Balix and Niquoro.

These details on playable races are part of El Ocho, the Mesoamerican fantasy campaign setting I’m creating for Patreon. Half of the content for the setting will be free here on the blog and the other half on Patreon (some of which will be free there, too).

1 thought on “The Races of Alberia (El Ocho Campaign Setting)”