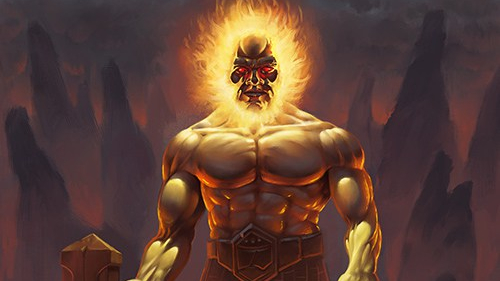 What is an azer?

According to the Monster Manual, azers are basically the dwarves of the Elemental Plane of Fire. They’re good at building stuff and mining, are short and stocky, and have fantastic beards. Beards made out of fire, sure, but beards nonetheless. They’ve also got beef with the efreeti, the fire genies, because it’s impossible to be a dwarf of any sort in D&D without some sort of ancient feud.

Azers live in volcanos on the border of the Elemental Plane of Earth and Elemental Plane of Fire. That’s where they find all the gems they’re so fond of. Of course, their mining doesn’t come without headaches as the efreeti constantly send their salamander servants to mess with ’em. Jerk efreeti!

Side note: azers speak Ignan. Since I’m pretty sure Ignan sounds like crackling fire to non-elemental ears, it’s going to be impossible for me to give these fire dwarves a Scottish accent in my campaigns!

There’s nothing too wild about azers. They’re tougher than the average dwarf or duergar and they’re immune to fire and poison. If you hit them, they deal fire damage. And their weapons deal fire damage. Otherwise, they’re brutes: strong and tough. In other words, they get in close and whack you with a hot hammer. They’re also wise and lawful enough to know when their lives are in danger, and should be able to assess whether or not an enemy is worth picking a fight with.

What azer variants are needed?

One thing to note about azers is that there’s not a whole lot of these guys around. Fire dwarves don’t really get jiggy with it. Instead, they craft new azers from bronze and then give it a portion of their own inner flame. And each one is totally unique.

Man, that’s pretty damn rad, if I say so myself.

Yet since this process is so slow, there’s not a whole lot of them around. That really got me thinking: why just limit them to dwarf appearances? If you’re going to spend all that time building unique “children” and you’re a total bad ass at creating stuff, why not make some cool variants? Such as:

Finally, no D&D monster is complete without having a cool mount to ride into battle. Azers are pretty tough, bad ass guys, but I didn’t want to make their mounts something that was already done before like a pig or a goat.

So, how about a bronze rhinoceros with flame pouring out of its eyes?

First up is the big guy.  Since azers are artists, the name azer magnum opus seemed appropriate enough (although, it doesn’t really gel with the other naming convention I used, but whatev). The magnum opus is the crown jewel of azerian creation that takes the power and firey will of at least twenty artisans to create. It sees itself as a child of the entire community, too, and will do everything in its power to protect it.

I wanted this guy to be big. I haven’t had the opportunity to create anything that’s Gargantuan yet on the blog, so this guy will scratch that itch. And Gargantuan usually comes with a hefty CR price tag. Hello CR 18!

Next, is the fire-throwing azer called the azer majster. They are the battle hardened leaders of the azers that rally the other azers against the efreeti. Instead of having this guy simply created, I thought a regular azer that had “been in the shit” and had lots of visible damage would be a lot cooler. Basically, parts of its bronze “skin” had been pulled off and it may have even lost a hand (or two) along the way.

What about our assassin? Upon acceptance of the Ladove Kladivo, or Ice Hammer, an azer willingly extinguishes its inner flame and dies for the good of its people. In death, cold from the hammer consumes its corpse and soon, the azer rises again as an azer ice assassin, clovek zladu. In this form, the azer doesn’t last long in the heat of the Elemental Plane of Fire. Regardless, their “undead” state gives them unique cold powers which are highly effective against the efreeti and their minions.

Finally, the azers’ mounts are known as the nosorozec. They’re basically azers created to look like rhinoceroses. However, they’re no mere pack animals. Nosorozec are considered great warriors and faithful mounts for the bravest majsters.

A note on the azer variant names.

Apparently, the origin of azers comes from Slavic folklore. Therefore, many of the names I created here are simply anglicized versions of Slovakian words. If you speak Slovakian or understand it, feel free to make fun of me.

As usual, these monsters are free for you to use in your D&D 5e campaigns. Just not commercially! And the art isn’t mine. Borrowed!

Heated Body. A creature that touches the azer or hits it with a melee attack while within 10 feet of it takes 11 (2d10) fire damage.

Heated Weapons. When the azer hits with a metal melee weapon, it deals an extra 14 (4d6) fire damage (included in the attack).

Illumination. The azer sheds bright light in a 40-foot radius and dim light for an additional 40 feet.

Heated Weapons. When the azer hits with a metal melee weapon, it deals an extra 3 (1d6) fire damage (included in the attack).

Illumination. The azer sheds bright light in a 20-foot radius and dim light for an additional 20 feet.

Flame Throw (1/day). The majster ejects flame in a 15-foot cone. Each creature in that area must make a DC 11 Dexterity saving throw, taking 16 (3d10) fire damage on a failed save, or half as much damage on a successful one.

Freezing Body. A creature that touches the clovek zladu or hits it with a melee attack while within 5 feet of it takes 5 (1d10) cold damage.

Freezing Weapons. When the clovek zladu hits with a metal melee weapon, it deals an extra 3 (1d6) cold damage.

Brute. A melee weapon deals on extra die of its damage when the clovek zladu hits with it (included in the attack).

Ice Hammer. Melee Weapon Attack: +5 to hit, reach 5 ft., one target. Hit: 10 (2d8 + 3) bludgeoning damage, or 14 (2d10 + 3) bludgeoning damage if used with two hands to make a melee attack, plus 3 (1d6) cold damage. If the target is a creature, it must make a DC 14 Constitution saving throw or become partially frozen. A partially frozen creature can’t use reactions, its speed is halved, and it can’t make more than one attack on its turn. In addition, the target can take either an action or a bonus action on its turn, not both.

Heated Body. A creature that touches the nosorozec or hits it with a melee attack while within 5 feet of it takes 5 (1d10) fire damage.

Heated Weapons. When the nosorozec hits with a metal melee weapon, it deals an extra 7 (2d6) fire damage (included in the attack).

Charge. If the nosorozec moves at least 20 feet straight toward a target and then hits it with a gore attack on the same turn, the target takes an extra 9 (2d8) bludgeoning damage. If the target is a creature, it must succeed on a DC 15 Strength saving throw or be knocked prone.

Illumination. The nosorozec sheds bright light in a 20-foot radius and dim light for an additional 20 feet.

And that finishes up the As of the Monster Manual! Woo hoo! Next, I’ll be jumping into the B’s starting with the banshee. Eeeeeee!

If there’s any requests you have or something (or someone) you’d like me to stat, feel free to drop a message below in the comments or contact me at hamrickbrands@gmail.com.