Black Ichor of the Iron Obelisk 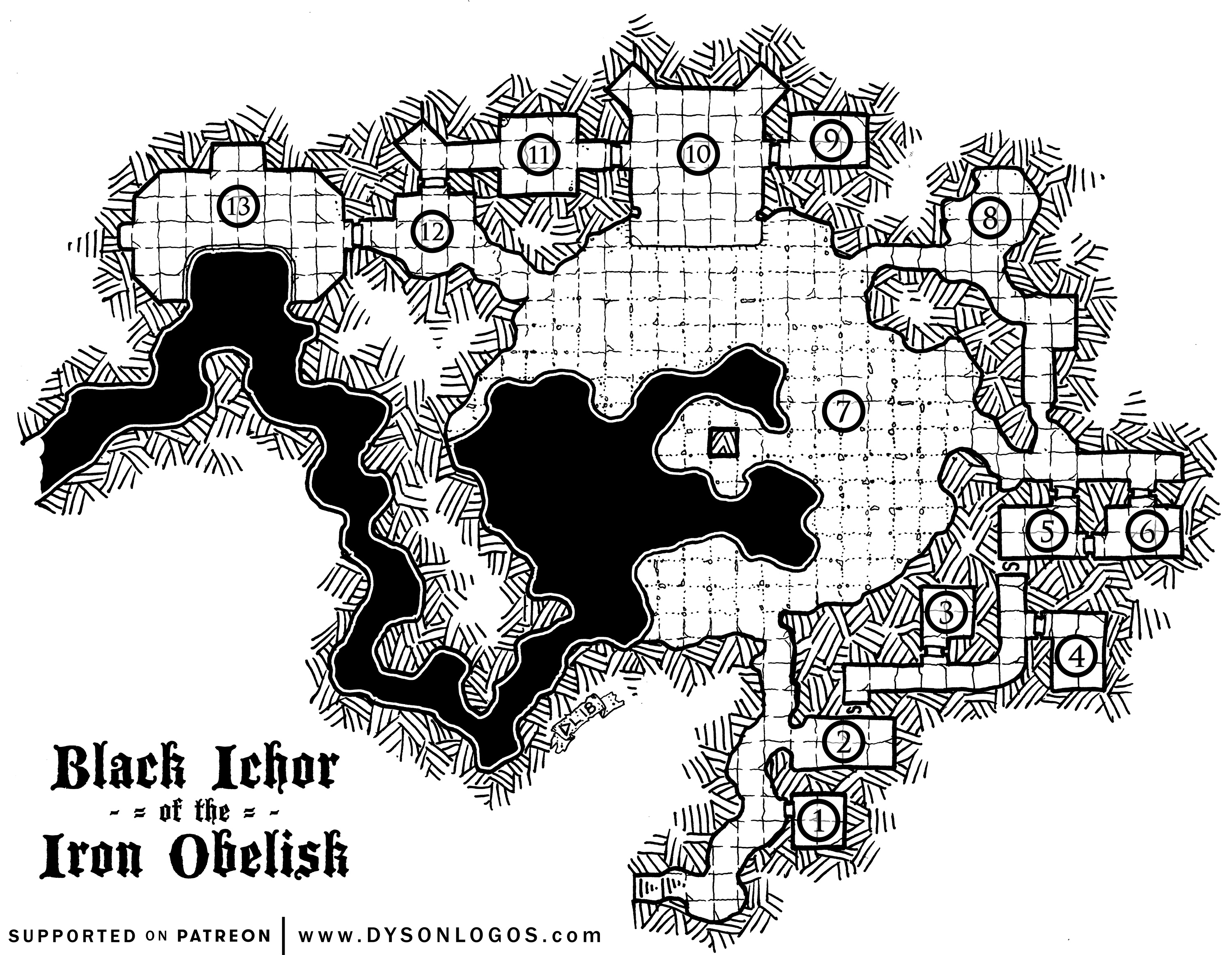 This is a one-shot dungeon/adventure I decided to cook up based on Dyson Logos’ commercial map offering, Black Ichor of the Iron Obelisk. It’s a small dungeon, which I kind of like, because that means a group of adventurers can probably make their way through in a single adventuring day. However, if you want to keep things going, I’ve included a passage to the Shadowfell version of the cavern that could lead your players to more (darker) adventures.

This adventure is for a group of 3-5 Dungeons & Dragons fifth edition 7-level player characters.

Here’s what Mr Logos has to say about the Iron Obelisk:

The Iron Obelisk weeps in near silence – the pools of ichor growing around it, fed by its melancholy nature. The ichors seep down and flow where underground waters should, tainting the darkness with the ennui and melancholy of the pillar of iron. Slow grinding noises are heard nearby, as if the world is changing itself – pulling away as far is it can from the source of this ichor. The wound where the Iron Obelisk sits has grown forming a cave nearly 200 feet across where the world tries to isolate the rusted spike within it.

The Iron Obelisk has many powerful uses. Flakes of rust taken from the area around it and ground to dust make sleep spells incredibly more potent, whereas rust taken from the Obelisk itself can be used to counter most forms of mind control and charms. Bits of iron taken along with this rust can be worked into somber weapons and armour that spread their melancholic nature to their bearers, but also to their foes.

But those who touch the iron obelisk itself or the black ichor are cursed with the yearning sadness of the device. They will seek out places underground where the ichor can be found, and while the ichor does nothing to sate or alleviate the sadness, it calls to the cursed and bathing in it will indeed remove any other curses or diseases the target is afflicted with.

In fact, when adventuring underground, those cursed by the obelisk or the ichor will often find themselves in proximity with the ichor – even if it shouldn’t be there. There is a 25% chance that any adventure leading them underground will lead them to the black ichor in some way. It will replace water in dungeons and adventures, and will seem ominously ever-present until the curse is broken.

The iron obelisk and its cave are located in the ruins of an old swamp. In my own Forgotten Realms campaign, I see it as being a swamp within the Neverwinter Woods or possibly even in the Mere of Dead Men off the Sword Coast.

Who created the Iron Obelisk?

Over 1,000 years ago, the Dame of Darkness created the obelisk to draw her Material and Feywild selves back into her so she could become whole once more. However, the project was a failure as the obelisk was unable to pierce its way into the magic-potent Feywild.

Defeated, the Dame abandoned the Iron Obelisk, allowing it to continue to damage the very fabric of reality.

Nearly 600 years later, drow discovered the obelisk and built a lair around it to study and worship it. But eventually its melancholic powers were too great for even the dark elves. Servants of Lolth seized the caverns, and declared the locations cursed by the gods and shunned it. The only passage into the weeping cave was shut off, and it was never heard of again.

Gith have discovered the Iron Obelisk.

Present day: a squad of githyanki, raiders a couple fiends, and a red dragon led by a half-dragon githyanki knight named Belcrom, believe that the black ichor and Iron Obelisk are tied to the illithid in some way. When the adventurers arrive, the Gith have already been in the caves for a couple days studying the ichor and the obelisk.

They wish to keep their motivations a secret, and will attack any who dare enter the caverns of the Iron Obelisk.

Locations in the Cave of the Obelisk

The map above shows the layout of the cave on the Material Plane side. Each square equals 10 feet. The following features are common throughout.

Doors are made from worked stone on stone hinges. Doors are unlocked unless noted otherwise.

Any room with the gith in it (not including Belcrom) has lanterns resting on any available surface. Belcrom, Ovodrin, Yubi, and Siles rely on their darkvision to see.

Black Ichor and the Iron Obelisk

Anyone who touches the iron obelisk itself or the black ichor are cursed with the yearning sadness of the device. They will seek out places underground where the ichor can be found, and while the ichor does nothing to sate or alleviate the sadness, it calls to the cursed and bathing in it will indeed remove any other curses or diseases the target is afflicted with.

In fact, when adventuring underground, those cursed by the obelisk or the ichor will often find themselves in proximity with the ichor – even if it shouldn’t be there. There is a 25% chance that any adventure leading them underground will lead them to the black ichor in some way. It will replace water in dungeons and adventures, and will seem ominously ever-present until the curse is broken.

This was where the drow priest’s guards resided. The old guard room is empty save for five short swords hung along the wall that are still in good working order and five folded suits of studded leather armor that have dry rotted with age.

The old door to the armory and barracks is trapped unless the password “V’lshivan” is spoken.

The old workshop where the drow would create implements to perform their rituals on the black ichor on obelisk was in this nook. Now, three githanki warriors are rummaging through the old items looking for anything of value.

Attacked by the Gith

The githyanki do not wish others to know that they are in the Iron Obelisks’ caves. They’ve been instructed by Belcrom to attack anyone that enters that is not part of their party.

A secret door is hidden behind an old old stone chair against the northern wall.

The old cistern for the drow is here. It, like all the other water in the caverns, has turned to the black ichor, too. A fresco of the priests adorn the walls. However, the black ichor has affected the frescos and now it seems like the paintings are crying.

This ancient room was where the drow once kept their supplies. It is all ruined by age and the presence of the black ichor.

This old kitchen is covered floor-to-ceiling in dense cobwebs.

This room was the banquet hall. At the eastern end of the room is a statue of the Dame of Darkness covering her face.

This large room is where the Iron Obelisk stands. Black ichor flows from it into the underground river that cuts through the caverns. Ovodrin, a young red dragon, realxes here, impatiently waiting for his half-brother, Belcrom would let them return to the astral plane.

The cavern is huge, with ceilings nearly 50 ft high, giving Ovodrin enough room to make his attacks from the air.

A lone githyanki warrior searches through the old slave pens for anything of value. Unfortunately, there isn’t much.

Time has been cruel to the High Priest of the Obelisk’s old chambers. Yellow mold grows over everything.

The drow priests sat for long hours weeping and meditating before the iron obelisk and its pools of dark ichor. Their old pillows remain, long ruined by the passage of a time.

The platform itself is 5 feet above the floor of the large chamber with the Iron Obelisk. Furthermore, the ceilings here are 30 feet high where it connects with area 7, and arc to 10 feet near the north wall.

A stone block where the high priest sat remains. Treasure was hidden inside, but it was already discovered by Belcrom, who avoided the trap. However, the trap is still active.

A pet giant spider was once kept here. Now, two bored fiends, Yubi and Siles wander around, scheming to overthrow Belcrom and his gith.

Before the drow would take their sacrifices into the baptism chamber to drown them, they would receive their victims in this room. As the captives begged for their lives, the drow would issue prayers and dress them in ceremonial garments.

Now, the room is in complete ruin.

Belcrom meditates here, contemplating his group’s next move. He’s already disappointed that the obelisk is not connected to the illithid. Any intrusions he’ll see as annoyances to be dealt with quickly.

The ancient baptism chamber is where the drow priests of the Obelisk drowned their unwilling victims in the black ichor. The overpowering loneliness brought on by the black ichor has drawn one of the Sorrowsworn, a Lonely from the Shadowfell.

Continued in the Shadowfell

That’s the Cavern of the Iron Obelisk and the Black Ichor. Next up, I’ll continue the adventure on its Shadowfell side where even weirder encounters await.

4 thoughts on “Black Ichor of the Iron Obelisk”