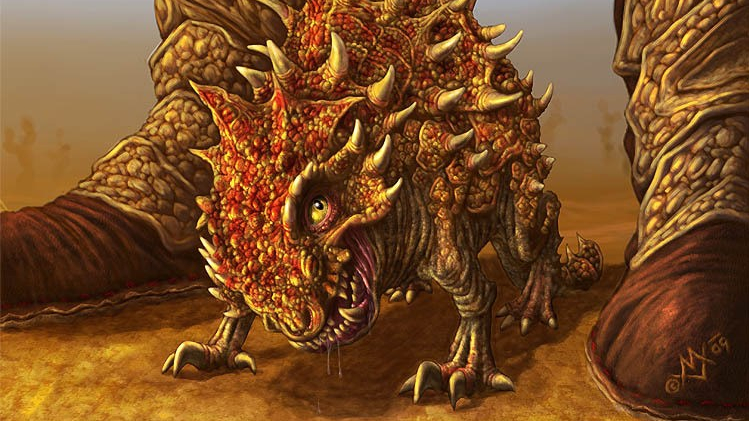 In the broken crags and tiny caves of the barrens live the timid baazrag. Two feet long or less, it is one of the smallest omnivores in the stoney barren regions. The baazrag’s face is protected by a bony covering that reaches down either side of the head and across the nose, with holes for the creature’s nostrils and eyes. The mouth and lower jaw are not protected below the bony covering. The beast’s humped back is covered with a hard, natural armor that protects the animal, especially the fluid storage sack just beneath the shell. Its four legs are comparatively frail but are adequate for darting from shelter to shelter around its rocky home. The tail of the Baazrag is about 5 inches long. Newborns are red-brown, green, yellow, or orange, but the color fades gradually to a sandy gray at old age.

Swarms. Individually, baazrags are unlikely to fight larger creatures. However, when a baazrag feels threatened, they call upon the others of the pack. The pack then forms a swarm to deal with the threats, attacking as one.

Boneclaw. Once in a very great while, a baazrag litter consists of only one young, much larger than normal. This creature is a boneclaw. The boneclaw stands more than 8 feet tall. The boneclaw’s head is protected by a bony covering. The upper body and back are covered with a hard shell that deflects all normal missiles smaller than a javelin. Its shell has sharp serrated edges everywhere except around the mouth and eyes. The boneclaw is a dull brown color, with sand-colored claws and red eyes that glow in the dark.

Bite. Melee Weapon Attack: +3 to hit, reach 5 ft., one target. Hit: 1 piercing damage and the target must make a DC 11 Constitution saving throw. On a failed saving throw the target takes an additional 2 (1d4) poison damage and is poisoned for 1 hour. While poisoned, the target cannot regain hit points.

Bites. Melee Weapon Attack: +4 to hit, reach 0 ft., one creature in the swarm’s space. Hit: 7 (2d6) piercing damage, or 3 (1d6) piercing damage if the swarm has half of its hit points or fewer. The target must make succeed on a DC 11 Constitution saving throw, taking 10 (2d6) poison damage on a failed saving throw and becomes poisoned for 1 hour. While poisoned, the creature cannot regain hit points.

Charge. If the baazrag moves at least 20 feet straight toward a target and then hits it with a gore attack on the same turn, the target takes an extra 9 (2d8) bludgeoning damage. If the target is a creature, it must succeed on a DC 15 Strength saving throw or be knocked prone.

Detect Life. The baazrag can magically sense the presence of creatures up to 500 feet away that aren’t undead or constructs. It knows the direction they’re in, but not their exact locations.

Inflict Pain (1/Day). After the baazrag successfully hits a creature, it can use its bonus action to increase the pain dealt by its attack, dealing an additional 7 (2d6) psychic damage.

Multiattack. The baazrag makes three attacks: one with its bite and two with its claws.

Gore. Melee Weapon Attack: +7 to hit, reach 5 ft., one target. Hit: 7 (1d4 + 5) piercing damage plus and the target must make a DC 12 Constitution saving throw or take 5 (2d4) slashing damage at the start of each of its turns due to an open wound. Each time the baazrag hits the wounded target with this attack, the damage dealt by the wound increases by 5 (2d4). Any creature can take an action to stanch the wound with a successful DC 13 Wisdom (Medicine) check. The wound also closes if the target received magical healing.