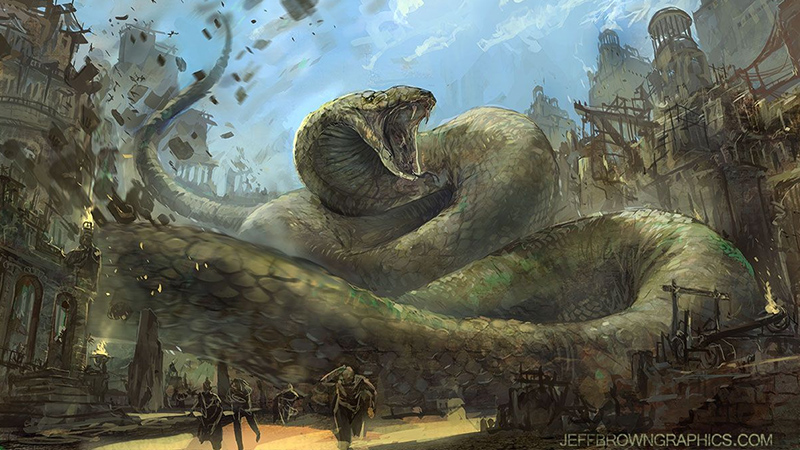 It’s 3am and I can’t sleep. So I’m making more monsters to go with the oriental theme that’s about to hit my Saturday campaign. Time to create a classic Chinese dragon (one of many), the bashe!

What is the bashe?

Bashe were mythical Chinese serpents similar to boa constrictors that could eat elephants whole. Wowza! They did this about once every three years, disgorging the bones after the period.

Basically, the bashe is a Gargantuan constrictor snake that can swallow Huge stuff in one bite. Chomp! Sounds pretty legendary to me! I’m envisioning a “tarrasque lite” type monster.

Constrict. Melee Weapon Attack: +12 to hit, reach 5 ft., one creature. Hit: 20 (3d8 + 7) bludgeoning damage, and the target is grappled (escape DC 25). Until this grapple ends, the creature is restrained, and the bashe can’t constrict another target.

Swallow. The bashe makes one bite attack against a Huge or smaller target it is grappling. If the attack hits, the target is also swallowed, and the grapple ends. While swallowed, the target is blinded and restrained, it has total cover against attacks and other effects outside the bashe, and it takes 28 (8d6) acid damage at the start of each of the bashe’s turns. A bashe can have only one creature swallowed at a time. If the bashe takes 50 damage or more on a single turn from the swallowed creature, the bashe must succeed on a DC 13 Constitution saving throw at the end of that turn or regurgitate the creature, which falls prone in as pace within 10 feet of the bashe. If the bashe dies, a swallowed creature is no longer restrained by it and can escape from the corpse by using 30 feet of movement, exiting prone.

Move. The bashe moves up to half its speed.

Devour (Costs 2 Actions). The bashe makes one constrict attack or uses its Swallow.

I don’t know why I decided to go full-on kaiju with the bashe. I suppose I was inspired by the picture I found. Plus, the idea of a colossal snake that wakes up every three years to eat was pretty cool. I love the idea of it having legendary attacks, too, dealing a whopping 64 damage per turn.