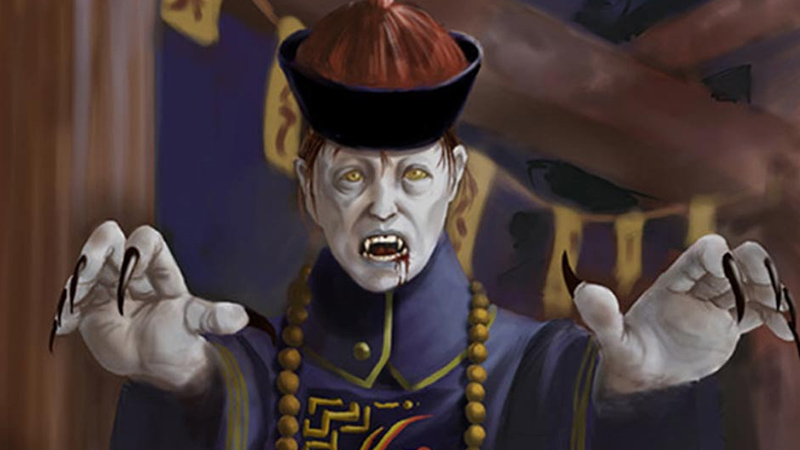 My PCs are head to Shou, the Qing Dynasty’esque part of the Forgotten Realms. And if you’re going to run a campaign with Asiatic flair, it’s only appropriate to have hopping vampires (aka jiangshi) show up at least once!

What is a hopping vampire (jiangshi)?

When a body is buried improperly or in an inauspicious location, it often returns to activity as a hopping vampire, hungry to kill living creatures. The body is animated by the po soul (evil portion of the soul) of the deceased; the hun soul (good portion) is departed. Without the hun soul, the body is not truly alive, so it retains some of the rigidity of death. The spectacle of these creatures hopping around looking for victims would be ridiculous if they were not such deadly opponents.

The return from death gives the hopping vampires a greenish tint to their skin, fangs in their mouths, and razor-sharp claws. They are usually dressed in funerary wear—either fresh and new or moldering with decay.

Claw. Melee Weapon Attack: +5 to hit, reach 5 ft., one target. Hit: 8 (1d10 + 3) slashing damage. If the target is a creature, it must succeed on a DC 13 Constitution saving throw or be cursed with the hopping vampire curse. The cursed target can’t regain hit points, and its hit point maximum decreases by 10 (3d6) for every 24 hours that elapse as the creature grows fangs and becomes more bestial. If the curse reduces the target’s hit point maximum to 0, the target dies, and it raises as a hopping vampire. The curse lasts until removed by the remove curse spell or other magic.

This is a classic monster that’s easy to subvert player expectations. After all, you think, “A vampire? Stake!” But instead here are these guys with cards stapled to their head hopping after you!

Go ahead and share it with one of the clicks below to help me get the word out about this blog.

And if you aren’t already, be sure to follow along by signing up to the right or using the link down in the footer.