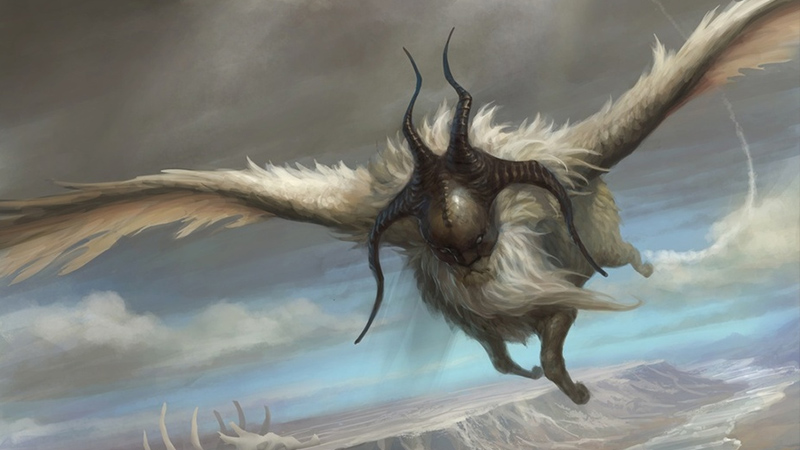 I mentioned in the last post that my PCs are head to Shou. Specifically, they’ll be in the city of Nathlekh which is ruled by a trio of lammasu. Only trouble is; there’s no lammasu in Dungeons & Dragons Fifth Edition yet!

Lammasus are noble creatures that are concerned with the welfare and safety of good beings. They usually take residence in abandoned temples and ruins in remote areas. Good folks that visit them are often treated to assistance, especially if their visitors are combating evil. However, they are no fans of evil beings and will attack those on sight.

A lammasu looks like a lion with eagle wings and the face of a human. They carry themselves nobly and are quite compassionate.

Flyby. The lammasu doesn’t provoke opportunity attacks when it flies out of an enemy’s reach.

Innate Spellcasting. The lammasu’s innate spellcasting ability is Wisdom. It can innately cast the following spells, requiring no components:

Keen Sight. The lammasu has advantage on Wisdom (Perception) checks that rely on sight.

Pounce. If the lammasu moves at least 20 feet straight toward a creature and then hits it with a claw attack on the same turn, that target must succeed on a DC 15 Strength saving throw or be knocked prone. If the target is prone, the lammasu can make a rake attack against it as a bonus action.

Spellcasting. The lammasu is a 7th-level spellcaster. Its spellcasting ability is Wisdom (spell save DC 13, +5 to hit with spell attacks). It requires no material components to cast its spells. The lammasu has the following cleric spells prepared:

Another D&D classic monster that gets the ol’ update. Hopefully, you can use these noble creatures in your own fifth edition campaigns.

Help me get the word out about this blog by sharing it! All it takes is a minute to click and let those on social media know about my content.