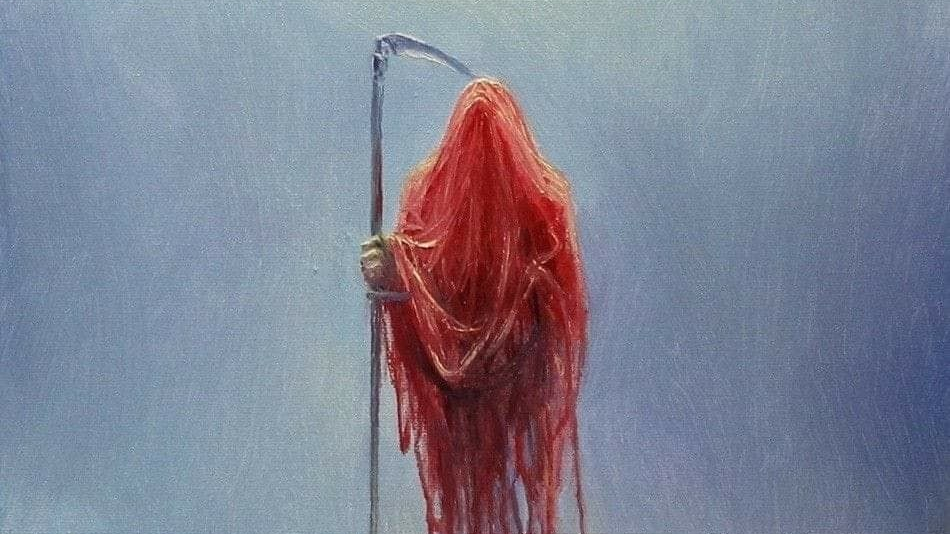 “I dropped my sword and fell backward into the mud. The thing, whatever it was, pulsed and expanded. Blood flowed from it like tendrils that stretched into the space around it. Those who still stood near it were caught within its web. I watched in horror as they would break free for a moment only to become caught again. Then I could see it on their faces. They were being drained. Their skin turned pale then gray then shriveled into husks until there was nothing left.”

Blutgeists haunt battlefields, murder sites, and other places where blood has been spilled. They are malicious spirits driven by a compulsion to consume blood. Those they drain become bloodless ones.

Undead Nature. The blutgeist does not require air, food, drink, or sleep.

Blood Form. The blutgeist can enter a hostile creature’s space and stop there. It can move through a space as narrow as 1 inch wide without squeezing.

Freeze. If the blutgeist takes cold damage, it partially freezes; its speed is reduced by 20 feet until the end of its next turn.

Multiattack. If the blutgeist has two or more creatures caught in its Vascular Web it can use its blood siphon once against each creature.

Blood Siphon. Melee Spell Attack: +6 to hit, reach 15 ft., one creature. Hit: 10 (3d6) necrotic damage. The target’s hit point maximum is reduced by an amount equal to the necrotic damage taken, and the blutgeist gains temporary hit points equal to that amount. The reduction lasts until the target finishes a long rest. The target dies if this effect reduces its hit point maximum to 0. A humanoid slain in this way returns as a bloodless one in 1d4 hours.

Vascular Web (1/day). If the blutgeist has 10 or more temporary hit points, it can remove the temporary hit points and create a web of thick, adhesive tissue that extends 15-feet in all directions around the blutgeist. The web lasts for 1 minute or until the blutgeist moves or uses its bonus action to drop the web. Each creature other than the blutgeist that starts its turn in the web or that enters it during its turn must make a DC 14 Dexterity saving throw. On a failed save, the creature is restrained as long as it remains in the mass or until it breaks free (escape DC 14). Regardless of a creature’s saving throw result, the vascular web counts as difficult terrain when moving through it.  If a creature has at least 5 feet of the vascular web between it and a hostile creature, it provides three-quarters cover, and if it has at least 20 feet of avascular mass between it, it provides total cover.

Art from Antics in the Armory.