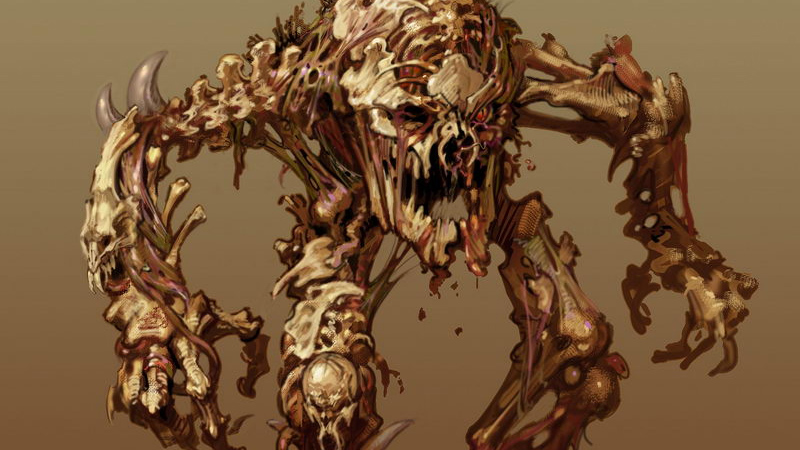 A throwback to old-school Ravenloft, bone golems are built from the previously animated bones of skeletal undead. These horrors stand roughly 9 feet tall and weigh between 150 and 280 pounds. They are seldom armored and can easily be mistaken for undead, much to the dismay of those who make this error.

How do Bone Golems Fight?

Bone golems are no more intelligent than other forms of golem so they will not employ clever tactics or strategies in combat. Their great power, however, makes them far deadlier than they initially appear to be; there is a chance that those not familiar with the true nature of their opponent will mistake them for simple undead.

Bone golems attack with their surprisingly strong blows and sharp, claw-like fingers. They can never be made to use weapons of any sort in melee.

To rile its opponents, the bone golem may throw back its head and issue a hideous laugh that causes most those who hear it to cower in fear or even die.

Damage Immunities necrotic, poison, psychic; piercing and slashing from nonmagical attacks not made with adamantine weapons

Necrotic Absorption. Whenever the golem is subjected to necrotic damage, it takes no damage and instead regains a number of hit points equal to the necrotic damage dealt.

Dreadful Laugh (Recharge 5-6). The bone golem tilts it head back issues a hideous laugh. All creatures within 60 feet of it that can hear it must make a DC 16 Wisdom saving throw or become frightened. While frightened in this way, a creature is paralyzed and it must repeat the saving throw at the end of its next turn. On a success, the effect ends. On a failure, the creature dies of fear. If a creature’s saving throw is successful, or the effect ends for it, the creature is immune to the golem’s Dreadful Laugh for the next 24 hours.

If you didn’t already know, I’m creating tons of new monsters and player options over on my Patreon page. Be sure to check it out.