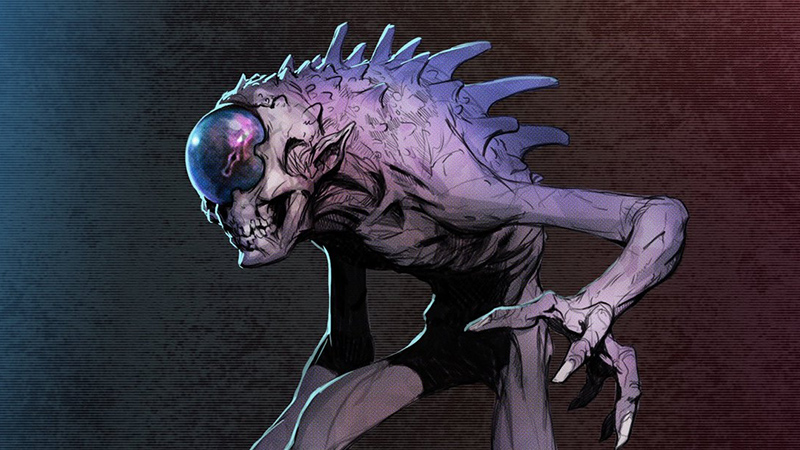 Some nothics, driven by an overwhelming compulsion to reconnect to magic–even if they aren’t quite sure why–take to desperate measures. Usually, this results in a lot of dead nothics. But sometimes, it creates potent aberrants, more horrible and weirder than the original nothic ever was.

Nothic ingesters are created when a nothic consumes a great number of potions. The volatile (and sometimes harmful) potions mix together in its gullet, producing all sorts of bizarre changes to the creature. While no two ingesters are alike, they do share some common traits, leading some to believe that this unusual method for reconnecting with the arcane arts may actually provide clues to ending their curse.

A nothic ingester looks like a larger-than-normal nothic. It has stained lips and rotting teeth, signs that it’s been tossing back potions. Sometimes, even portions of its lower jaw and throat are missing, dissolved or burned away by acids and poisons. Its skin and scales are typically brightly colored, sometimes constantly changing to fit its mood or environment. And they still have that single, baleful eye, capable of discovering a query’s darkest secrets.

Amphibious. The nothic can breathe air and water.

Keen Sight. The nothic has advantage on Wisdom (Perception) checks that rely on sight.

Fire Breath (Recharge 5-6). The nothic exhales a 30-foot cone of fire. Each creature in that area must make a DC 16 Dexterity saving throw, taking 14 (4d6) fire damage on a failed save, or half as much damage on a successful one.

Rotting Gaze. The nothic targets one creature it can see within 60 feet of it. The target must succeed on a DC 16 Constitution saving throw against this magic or take 17 (5d6) necrotic damage.

Weird Insight. The nothic targets one creature it can see within 60 feet of it. The target must contest its Charisma (Deception) check against the nothic’s Wisdom (Insight) check. If the nothic wins, it magically learns one fact or secret about the target. The target automatically wins if it is immune to being charmed.

Hopefully, you enjoyed this variation on a cool Fifth Edition monster (I think it got its start in 3rd, but I digress).

If you didn’t already know, I’m creating tons of new monsters and player options over on my Patreon page. Be sure to check it out.