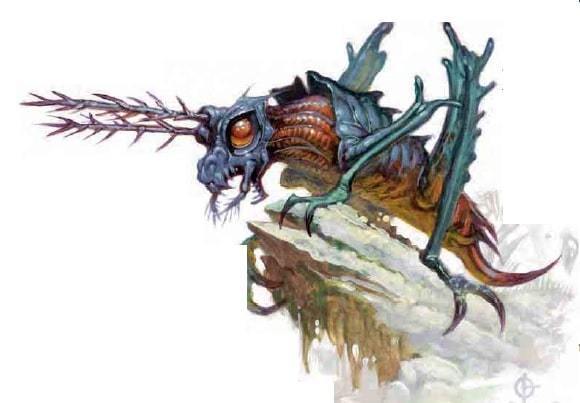 Bonespears are patient predators that live on many different planes. Named for the two long, wickedly barbed horns that grow from their heads, they are a menace to any creature they might perceive as food–a category that includes most anything that moves. Their home plane is Acheron, but bonespears have spread throughout the planes and can be found in even the most inhospitable climates due to their natural hardiness.

Bonespears resemble large grasshoppers in shape. Their dark, carapaced bodies are 8 feet long, and they stand nearly 5 feet tall at the shoulder. Their heads are capped by a pair of 3-foot-long barbed horns. Only when the creature begins to hunt does it become apparent that the horns are not firmly attached to the creature’s head–long sinews connecting the head and the horns enable the bonespear to launch its horns at prey and real them in to be consumed.

Bonespears can sit for days on end, waiting for suitable prey to wander by. They typically choose barren rocky places to conduct their hunts, and many bone spears lair underground. If more than a week passes without a sign of prey, the creatures move on until they find a food source.

Horns. Melee or Ranged Weapon Attack: +10 to hit, reach 10 ft. or range 60 ft., one target. Hit: 13 (2d6 + 6) plus 14 (4d6) poison damage and the target is grappled (escape DC 22). While grappled by the bonespear, the target automatically takes damage from the bonespear’s horn attack at the end of each of its turns. Once the bonespear spears a target, it can’t use its horns on another target until its current target escapes or is dead.

Reel. The bonespear pulls a creature it has speared up to 20 feet straight towards it.