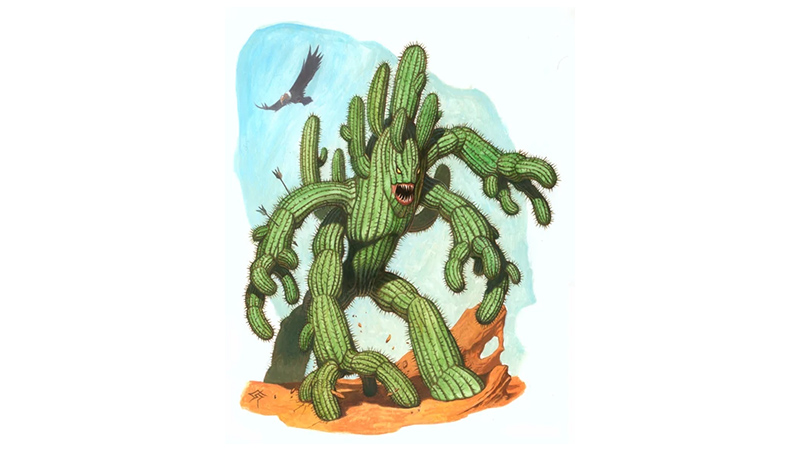 The curse of the Gulthias tree does not limit itself only to forests; the Desert de Los Muertos has its own evil, animated cacti, too. Named las plagas de cactus by the indigenous tribes who live just south of the Rio Norte, these blights are just as cruel as their deciduous cousins.

Cactus blights haunt the deserts, looking for blood to bring back to the source of their curse. What that source is? None have seen it. Yet, with grim determination, these wicked cacti travel along their course paths, living animals (and sometimes humanoids) stuck to their impossibly sharp spines, unable to escape.

False Appearance. While the blight remains motionless, it is indistinguishable from a large cactus.

Spines. A creature that touches the blight or hits it with a melee attack while within 5 feet of it takes 4 (1d8) piercing damage. In addition, any creature grappled by the blight takes this damage at the start of each of the blight’s turns.

Needles (Recharge 6). The blight fires its spines in a 20-foot sphere centered on itself. Each creature in that area must make a DC 12 Dexterity saving throw. On a failed save, a creature takes 9 (2d8) piercing damage or half as much on a successful one.

Looking for more great content? Not only will you continue to receive the awesome monsters and adventures here on the blog, but I’ll be creating cool new creatures, player options, and more over on my Patreon page.