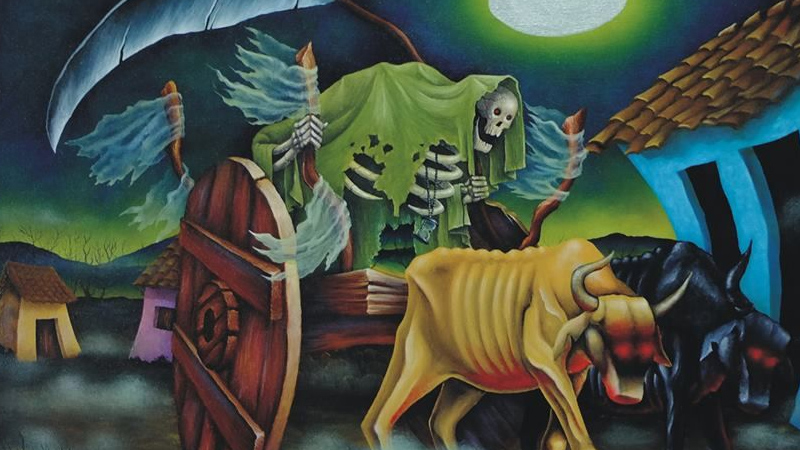 La Carretanagua is a ghostly ox cart driver that some say appears as a tall hooded apparition. It’s believed that he is not originally of Niquaro or anywhere in Alberia, but hails from Lejos, across MarQue Bosteza. Truth is he’s a fiend that’s been hired by the denizens of hell to bring the dead to judgment. Chained to his cart are the souls of the dead, wailing as they are pulled to some unknown destination.

Legend states that La Carretanagua makes his way through towns from just after midnight making a racket as his ancient oxen pull his cart along. Individuals who say they have heard him in the night have discovered that one of the town’s citizens is dead the next day.

Those who have ‘seen’ this mysterious entourage of oxen and lost souls say that it moves quickly and is unable to turn corners due to is cross shape, simply disappearing as it reaches the end of a road.

Ghost Parade. When first encountered, La Carretanagua is leading 1d4 + 3 fantasmas chained to his cart which is pulled by two ghostly oxen. These fantasmas are under his control and can be directed for free by La Carretanagua.

Magic Resistance. La Carretanagua has advantage on saving throws against spells and other magical effects.

Sense Dead. La Carretanagua can magically sense the location of a creature that has just recently died (within the last 24 hours) up to 5 miles away that aren’t undead or constructs.

Incorporeal Movement. The fantasma can move through other creatures and objects as if they were difficult terrain. It takes (1d10) force damage if it ends its turn inside an object.

Charge. If the skeleton moves at least 20 feet straight toward a target and then hits it with a gore attack on the same turn, the target takes an extra 7 (2d6) piercing damage.

These new monsters are part of the Mesoamerican fantasy campaign setting I’m creating for Patreon called El Ocho. Half of the content for the setting will be free here on the blog and the other half on Patreon (some of which will be free there, too).