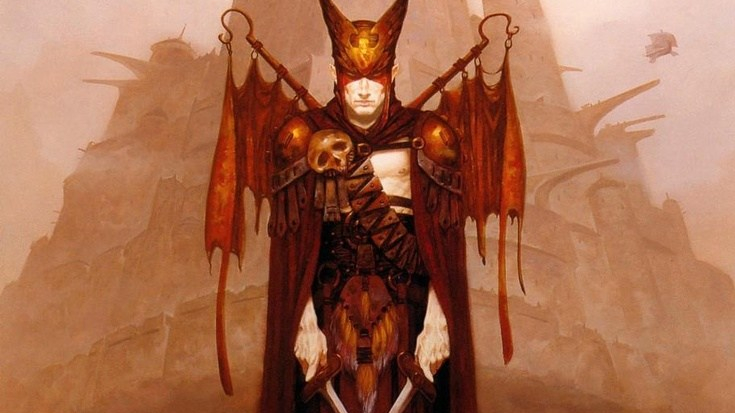 The majority of Athas is a barren wasteland. However, along the Tablelands, a thin stretch of land bordering the Sea of Silt, there are multiple city-states where sentient life continues to cling to existence.

Each city-state is unique, with its own people, culture, and ideals. The optional rules below offer bonus proficiencies to natives of city-states, offering a little extra flavor to the game.

The cultural scene, though distorted to reflect propaganda needs, still draws the intense interest of patricians’ and freemen.

Native Proficiency: In addition to the proficiencies granted by your background, class, and other features, you can add your proficiency bonus to any ability check to tell stories and poems, recall facts of a mythological story, and use stories to convey hidden messages.

All of the sorcerer-kings and queens rely on cruelty and violence. But only Draj makes these part of its very culture. At all levels of society the Draji value cruelty, strength, and ferocity, and they sneer at weakness or respect for the enemy. Warriors enjoy the highest status, rogues the lowest–few rogues remain alive in Draj for long.

The main Draji ceremonies all involve war. The “Flower Wars” (training battles) occur twice a year. Soldiers dress in full feathery regalia, with jaguar headdresses and many trophies hanging from wide leather belts. They fight with real weapons, which are stone-edged clubs. The winners gain glory; the losers get exiled.

Draj shows proficiency in some other areas. Draji weavers build advanced looms and its feather-work excels all other cities save Gulg.

Native Proficiency: In addition to the proficiencies granted by your background, class, and other features, you have proficiency with macuahuitls (see below) and either cook’s utensils or weaver’s tools.

A macuahuitl is a wooden club with obsidian blades. The name is derived from an ancient Athasian language and means “hand-wood”. Its sides are embedded with prismatic blades traditionally made from obsidian; obsidian is capable of producing an edge sharper than high-quality steel razor blades. The macuahuitl was a standard close combat weapon of the Draji. When you make an attack with the macuahuitl, you can decide to deal bludgeoning damage or slashing damage with the attack.

Gulg’s society is uniform, possessing strong cultural values and a system of nobility. The culture reveres the wisdom of elders, the sanctity of forest life, artistic expression in all parts of life, and harmony between society and the wild. Nobles attain their status only through a keen understanding of the forest. Their hunting supports the city and most of them realize that interconnected nature of life. Other cities on Athas seldom reach such an enlightened understanding. Nibenay, in particular regards, the forest purely as a source of raw materials. This helps explain the bitter hatred between the two cities.

Native Proficiencies: In addition to the proficiencies granted by your background, class, and other features, you have proficiency with Nature checks related to the Crescent Forest.

The Nibenese culture stresses self-discipline, quiet acceptance of authority, reverence of the elderly, and politeness to strangers. Politeness, though, often goes hand in hand with ruthless dishonesty toward anyone outside one’s family. The common wisdom in the Tyr Region has it that a Nibenese merchant grovels as he offers you a hardwood spear, smiles and nods fervently at everything you say, then swindles you out of your last ceramic bit. And as he scurries away, the spear breaks in your hand.

Newcomers to Nibenay may find many local customs curious, if not downright bizarre. Betrothed couples express their commitment by joining themselves at the waist with a long scarf. Friends exchange gretings by yankgin each other’s hair. Children drag life-sized dolls made of straw and rags, called sanshiza (“substitute mothers”). The Nibenese revere cats as vessels of unknowable wisdom, but despise dogs as vermin.

Native Proficiencies: In addition to the proficiencies granted by your background, class, and other features, you have proficiency with Performance checks that involve dancing.

Raam, the most populous city-state, ranks with Draj as the largest in area. Raam also holds the most racially diverse population in the region; here, humans do not make up the majority. As such, travelers face greater language problems in Raam than in other city-states.

Raam is a city in constant chaos. In response to this chaos, the people of Raam have withdrawn into themselves. Worry creases their faces. A Raam social engagement tends to resemble a funeral service more than a party. Yet, in this atmosphere of misery, visitors to Raam feel understandable surprise to find citizens friendly and polite. The prevalence of fine art in Raam also shocks visitors. Citizens struggle to create their own beauty, and the results appear everywhere.

Tyr is a city quickly recovering from a decade of strife and turmoil. The only “free city” among the Seven Cities, Tyr celebrates its independence from the dead sorcerer-king Kalak and slavery despite its hardships.

Most Tyrians wear loose-fitting cotton tunics gathered by a belt at the waist. Others wear loincloths and vests. Experienced travelers know of the importance to shield one’s skin from the blistering sun. Light gauze or silks are ofttimes draped over heads and across one’s arms. Turbans or other light headgear are worn. Nobles tend to remain inside during the day, their finery only seen at dusk.

Tyr is as it has always been: a melting pot of cultures and ideals. More and more emigrants arrive in Tyr to make their home in the free city. They bring their cultures and traditions along with them.

The Urikite philosophy of amukash revolves around an endless struggle between the abstract philosophies of order and change. The templar scholars of Destiny’s Kingdom, the sorcerer-king Hamanu’s imperial palace, teach that Order currently dominates, and so Athas is stagnating, even dying. Hamanu will assert the cause of change, they say, and restore vigor to the world.

Lower classes wear a white linen shirt with short, tight sleeves, knee-length. Upper classes wear the same shirt to ankle-length, but with a striped or diamond pattern and topped with a girdle trimmed with tassels. An elaborate scarf indicates the wearer’s station; the longer and richer the scarf, the higher the social rank. Citizens wear the scarves only in the evenings and at night, after the heat of the day.

Urikites enjoy competitive sports, such as arm wrestling and a hoop-rolling game known as pichut, as well as story-telling and dancing.

Native Proficiencies: In addition to the proficiencies granted by your background, class, and other features, you can add your proficiency bonus to Athletics contests made to compete in competitive sports.