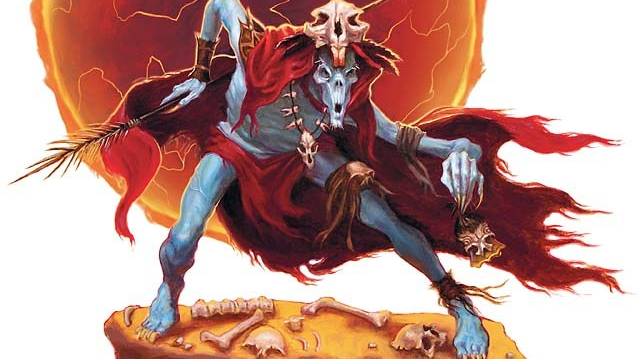 At first sight, the belgoi appear human–and then you notice the long claws on the end of their fingers, their puckered toothless mouths, and their webbed, three-toed feet. They are a race of ignorant demi-humans who dwell in the most forlorn wastes of Athas. They have a taste for the flesh of intelligent races and no ruler will tolerate them within five day’s travel of his or her city.

Detect Sentience. The belgoi can sense the presence and location of any creature within 300 feet of it that has an Intelligence of 3 or higher, regardless of interposing barriers, unless the creature is protected by a mind blank spell or similar defense.

Innate Spellcasting (Psionics). The belgoi’s innate spellcasting ability is Wisdom (spell save DC 10). It can innately cast the following spells, requiring no components:

Psychic Defenses. The belgoi is immune to any effect that would detect its emotions or read its thoughts and divination spells. The effect even foils wish spells and spells or effects of similar power used to affect the belgoi’s mind or to gain information about it.

Psychic Bell (1/Day). The belgoi rings a special bell that can attract sentient creatures. The belgoi targets one creature with an Intelligence score of 3 or more that it can sense within 300 feet of it. The target must succeed on a DC 10 Wisdom saving throw or become charmed by the belgoi until the belgoi stops ringing its bell. The belgoi must take a bonus action on its subsequent turns to continue ringing the bell. It can stop ringing at any time. The ringing ends if the belgoi is incapacitated.

While charmed by the belgoi, a target is incapacitated and ignores the bells of other belgoi. If the charmed target is more than 5 feet away from the belgoi, the target must move on its turn toward the belgoi by the most direct route, trying to get within 5 feet. It doesn’t avoid opportunity attacks, but before moving into damaging terrain, such as lava or a pit, and whenever it takes damage from a source other than the belgoi, the target can repeat the saving throw. A charmed target can also repeat the saving throw at the end of each of its turns. If the saving throw is successful, the effect ends on it.

A target that successfully saves is immune to this belgoi’s bell for the next 24 hours.

Choose a creature within range. The target must make an Intelligence saving throw.
On a failed save, the creature takes 3d8 psychic damage, and it is filled with self-doubt, leaving it able to use its action on its next turn only to take the Dodge, Disengage, or Hide action. On a successful saving throw, it takes half as much damage.

At Higher Levels. When you use a spell slot of 2nd level or higher to cast this spell, the damage increases by 1d8 for each spell level above 1st.