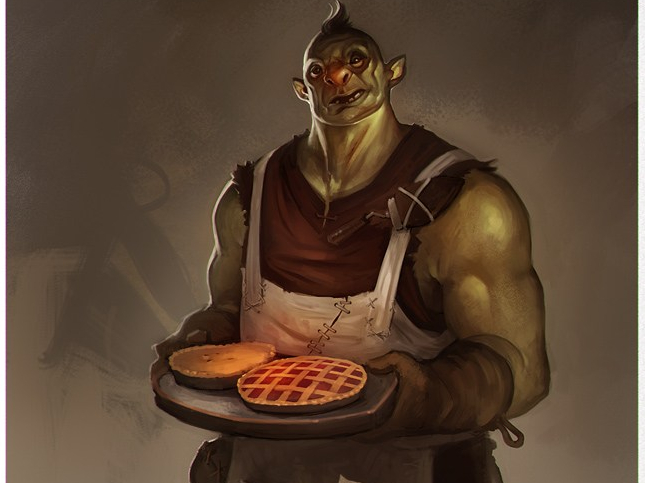 This entry is a part of March’s 26 Days of Subclasses featurette where I’m creating new subclasses every day for 26 days. Not only am I creating subclasses for all Patrons of Silver Tier or higher, but I’m also creating them based on Instagram recommendations, as well.

I love asking for requests because I always get the weirdest stuff when I do. Case in point, when I asked for Instagram for a subclass that started with ‘B’ I got a ton of folks asking for a baker. Totally weird.

No class mention, though, so I had to sort of go it on my own. But I decided, what the hell? I’ll make it into a Divine Domain. A Cleric of Cookies, if you will.

This class is a total buff machine, relying on goodberry more than anything (which I guess I should call “good cookie”). Instead of making it a class feature, I just tied in the spell itself. Therefore, it’s limited by the number of slots you have. Burn a slot–make some cookies. The healing is on part with what a Life cleric can do at the same level.

From there, it was just a matter of making it a buff class, giving the Bard’s “Song of Rest” feature–instead of dice, it’s proficiency, so a little more stable than the Bard’s die roll.

At 6th, its got powers to help keep its auras and concentration spells up.

8th is Potent Spellcasting (of course).

And 17th lets you make your magic cookies even better with imbued magical effects. The only one I’m kinda sorta (but not really) worried about is the protection from energy spell since it doesn’t scale like the others, but I figure at the cost of a 1st-level spell slot, it could be a lot worse.

At 1st level, a cleric gains the Divine Domain feature. The following Baking domain option is available to a cleric, in addition to those normally offered.

Gods of baking are those who put their faith into flour, yeast, and water, roll it up, stick it in an oven, and share its warm rewards with the rest of the world. Whether it’s bread, cakes, rolls, cookies, or even donuts, clerics who follow the tenets of the baking domain sow their magic into food, using it to assist companions and others in need.

In Wandrossa, the gods who offer baking as domain include the Jade Panda, Avelynn, and even Coram Krulak. In fact, there is a new divine bakery in Port Mathis that offers enchanted cookies for weary patrons.

You gain domain spells at the cleric levels listed in the Baking Domain Spells table. See the Divine Domain class feature for how domain spells work.

When you choose this domain at 1st level, you gain proficiency with cook’s utensils.

At 1st level, whenever you cast goodberry, you can choose to have four biscuits, cookies, donuts, or other baked goods appear in your hand instead of berries. Eating the baked goods restores 3 hit points instead of the 1 normally provided by goodberry.

Starting at 2nd level, you can use your Channel Divinity to help revitalize your wounded allies during a short rest through baking. If you or any friendly creatures who can smell your baked goods regain hit points at the end of the short rest by spending one or more Hit Dice, each of those creatures gains extra hit points equal to your proficiency bonus.

Starting at 6th level, your pleasant demeanor and attitude grant you special abilities:

Starting at 8th level, you add your Wisdom modifier to the damage you deal with any cleric cantrip.

Saint of the Oven

At 17th level, your skill in the kitchen is rarely contested. Instead of the healing effects offered by the food you create with your Baked Goods feature, you can choose to imbue the baked goods with the effects of one of the following spells instead: enhance ability (choose the ability type when you bake the goods), lesser restoration, protection from energy (choose the damage type when you bake the goods). All four baked goods must have the same effect. After a creature eats the baked good, the spell takes effect as if you had cast it upon it.

If you haven’t heard, I’ve got a book out called EVIL. It’s 56 pages of new Fifth Edition subclasses, races, magic items, monsters, and more all in an easy-to-read PDF.

Get the book EVIL by DMDave, now!