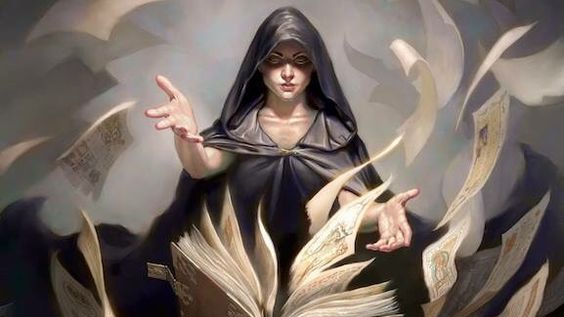 Recently, I created a full-fledged class option for the Archivist which felt a little funky to me in the end. So I thought I might change things up a little and turn the Archivist into subclass options for each class.

Here is a quick rundown of how Bard Colleges work.

All bards get two-to-three features at 3rd level. Typically, one uses Bardic Inspiration to power its effect while the second involves some sort of performance or a set of proficiencies.

Mantle of Inspiration (Glamour). Use a Bardic Inspiration to give a number of creatures equal to your Cha modifier 5 temporary hit points. This scales to 8, 11, and 14 at 5th, 10th, and 15th levels respectively.

Enthralling Performance (Glamour). Perform for 1 minute to charm (Wis save) a number of creatures equal to your Cha modifier for 1 hour.

Bonus Proficiencies (Lore). You gain proficiency with three skills of your choice.

Cutting Words (Lore). Use reaction to spend bardic inspiration to subtract from an attack roll, ability check, or damage roll.

Bonus Proficiencies (Swords). You gain proficiency with medium armor and the scimitar.

Blade Flourish (Swords). You have three special attacks that you can make when you spend Bardic Inspiration.

Combat Inspiration (Valor). A creature with Bardic Inspiration can roll the die and add the number rolled to a weapon damage roll it just made or it can use its reaction to add the roll to its AC against an attack.

Words of Terror (Whispers). Speak to a humanoid for 1 minute to frighten it (Wis save).

At 6th level, your features vary largely by the college. Glamour, Swords, and Valor all affect action economy (and Lore to some extent) and Mantle of Whispers is just, well… weird, albeit cool. 6th level is inside of the second tier, therefore its effects should help against second-tier problems.

Mantle of Majesty (Glamour). You can cast command as a bonus action. Usable between rests.

Extra Attack (Swords and Valor). You can attack twice.

Mantle of Whispers (Whispers). You can magically capture a shadow to gain a disguise for 1 hour. Usable between rests.

Like 6th level, there is no “clean and easy” method to creating features. They run the gamut between offensive, defensive, and utility. 14th level is inside of the third tier, therefore its effects should help against third-tier problems.

Battle Magic (Valor). After casting a bard spell, use a bonus action to make an attack.

Shadow Lore (Whispers). Charm a creature for 8 hours (Wis save). Usable between rests.

Recreating the Archivist with Bard Colleges

The Archivist is a Heroes of Horror class that’s more or less a cleric that can use Intelligence to cast magic. It has a Dark Lore power that lets it determine monster weaknesses.

I see this Bard subclass as sort of a party buff against specific creature types, sort of a “true blue” party buff cleric that’s Charisma-based versus Wisdom. All of its abilities will help out the party as you read from your prayerbook. It’s a great supplemental character for well-rounded Fifth Edition parties.

At 3rd level, a bard gains the Bard College feature. The following College of Archives option is available to a bard in addition to those normally offered.

Graduates of the College of Archives seek out esoteric sources of divine lore, wherever those sources might be, securing those secrets for themselves and their fellow scholars.

At 3rd level, you have a prayerbook containing cleric spells as a demonstration of your devotion to divine magic.  You do not need to study or prepare your cleric spells from your prayerbook. However, you can use the prayerbook as your focus for these spells as well as your bard spells.

Learning Spells of 1st Level and Higher. Starting at 3rd level, you learn two spells of your choice from the cleric spell list. A spell you choose must be of a level you can cast, as shown on the Bard table, or a cantrip. The chosen spells count as bard spells for you but don’t count against the number of bard spells you know. You learn two additional cleric spells at 3rd, 5th, 7th, and 9th level. Whenever you gain a level in this class, you can replace one of the cleric spells you know with another spell of your choice from the cleric spell list. The new spell must be of a level for which you have spell slots.

Puissance. You can expend one use of your Bardic Inspiration to give each of your allies within 30 feet of you advantage on saving throws made against the target creature’s attacks and traits. This effect lasts until the start of your next turn.

Tactics. You can expend one use of your Bardic Inspiration to give each of your allies within 30 feet of you a +1 bonus to attack rolls made against the target creature and any other creatures of the target’s race or species. This effect lasts until the start of your next turn.

At 6th level, when you use your Dark Lore you can expend one use of your Bardic Inspiration to speak a phrase that haunts the target creature. The target creature must make a Wisdom saving throw against your spell save DC. On a failed saving throw, the creature is stunned until the end of its next turn.

At 6th level, when you use your Dark Lore you can expend one use of your Bardic Inspiration to instruct each of your allies within 30 feet of you on the location of the target’s vital spots. If the ally’s next attack against the target or any other creature of the target’s race or species hits, the ally may roll an extra 1d6 to the damage roll. This effect lasts until the start of your next turn.

At 14th level, when you use your Dark Lore you can expend one use of your Bardic Inspiration to prepare each of your allies within 30 feet of you against the target’s and any other creatures of the target’s race or species’ attacks. The target has disadvantage on attack rolls against your allies until the end of its next turn.

I’m going to work on a few more of these subclasses and see which one fits the best.

If you think this would be a fun option for your Bard, be sure to share it with those who would also like it.