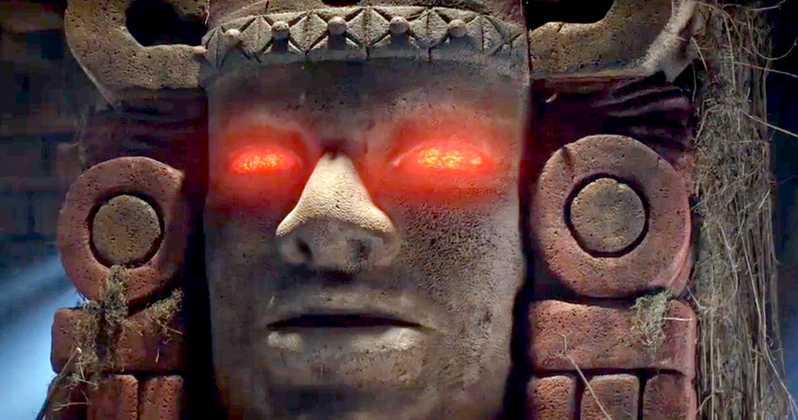 This is a great request. It comes in as part of a contest I held recently to pick a special attack for the blutgeist monster I created here on the blog. The winner got to put in a request that appeared at the top of the request pile. Whoop whoop!

And here’s what he asked for (geeky nostalgia warning):

I am running Tomb of Annihilation for my group and would love to include a mini boss cameo of Olmec, from that old Nickelodeon show Legends of the Hidden Temple. I’d love to see what you could come up with!

Here are a few more requirements for this design:

Olmec is, well, an Olmec, a large stone head with origins in Mesoamerican mythology. On the Nickelodeon show, Olmec served as the keeper of the temple secrets. He may serve the same purpose in Fifth Edition Dungeons & Dragons, easily fitting into the Tomb of Annihilation. In that module, he really fits well into either in the Fane of the Night Serpent or the Tomb of the Nine Gods.

So what challenge rating do we need to set for a creature that falls somewhere between Medium-Hard difficulty for 5 PCs of 9th level? Let’s do a little math, shall we?

Now that we know Olmec’s target CR, it’s a matter of building a creature that fits that Challenge Rating. But how tough are CR 11 monsters?

Fortunately, my favorite chart in the whole book, Monster Statistics by Challenge Rating (page 274 of the DMG) tells us exactly how to design those features.

Here is what Olmec normally needs to have to be a CR 11 monster:

Now, keep in mind that the offensive CR does not have to equal defensive CR. So long as the average is CR 11, we’ll be fine. Usually, I like to keep the two sides as close together as possible to prevent awkward imbalances. But after doing a rough draft of Olmec, I realized that to get his defensive side to match a lot of his flavor (and keep him from getting nerfed early on) I probably need to bump his defensive CR up to 15 and take his offensive CR down to 7. Here’s what that means for us:

I think all of that sounds pretty good. He might not be able to deal tons of damage, but at least he won’t go down in two turns.

Breaking it all down

Okay, Olmec is essentially a talking Olmec head that doesn’t move. So what does that mean for stats?

Olmec is a pretty big head. I think I’ll go with Large on size. That will give him 1d10s for hit dice.

I’m leaning towards Olmec being a construct and will probably base a lot of his powers on stolen golems and similar magical constructs. This means lots of immunities and resistances.

Olmec will serve its creators without question, who I’m guessing will be evil yuan-ti. His alignment is lawful evil.

We know from the Dungeon Master Guide that stone objects have a natural AC of 17 as does the stone golem from the Monster Manual. And it just so happens that 18 is our target AC anyways. However, Olmec’s Dexterity (see below) is going to change things up a bit and drop it down to 13 (which is the delta between the stone golem’s Dexterity penalty and Olmec’s). That gives us 5 effective AC we can make up in special traits such as magic resistance, shield, etc.

I’m expecting at least a pair or trio of damage immunities plus bludgeoning, piercing, slashing resistances. That means that his hit points are effectively 150% more valuable than a normal creature’s hit points (for details, check out page 277 of the DMG). Also, I want to give him some Legendary Resistances that will help him out since he’s immobile. Each Legendary Resistance we give him is worth 30 hit points normally, but effectively 45 with the other resistances. Pretty expensive! Let’s do a little reverse engineering on the hit points to figure out what his base hit points need to be and whether or not we should actually include legendary resistance:

Olmec can’t move. He’s a permanent fixture on a temple wall. So his movement speed is 0.

So what about abilities? I’m going to base Olmec’s abilities roughly on the Stone Golem which is probably the best creature that’s similar to Olmec.

If I give Olmec three saving throw proficiencies, that’ll bump his effective AC up. So I’m just going to give him two. But which two? He’s immune to almost all conditions that Consitution, Wisdom, or Charisma would affect. Intelligence saving throws are rare and usually only deal psychic damage, which he’s immune to.

That leaves us Strength and Dex. Strength is good because he should be virtually immovable (I’ll buff that up even more in his special traits). He can’t move, so it doesn’t make sense for him to be good at Dex–he’ll have to use counterspells to protect himself from Dex magic. Therefore, I think I’ll dump his second save in Cha to help him against goofy spells like banishment.

I think Olmec could use Perception to spot pesky rogues, but beyond that, he’s good.

Let’s give Olmec the same bag of immunities as stone golems. So that’s poison, psychic; bludgeoning, piercing and slashing from nonmagical attacks not made with adamantine weapons.

Similarly, we should give Olmec the same condition immunities as stone golems plus those relevant to his immobile status. That means charmed, exhaustion, frightened, paralyzed, petrified, and poisoned. Also grappled, prone, restrained seems to make sense, too, since he’s just a face sticking out of a wall and none of those effects should stop him from biting and/or casting spells.

Olmec needs darkvision for sure. His passive Perception is 15 (prof. bonus plus Wisdom modifier).

Olmec will have at least four languages to match his high Intelligence. To fit with the campaign, I think Common, Abyssal, and Draconic fit since he’s probably going to be around some yuan-ti. And we’ll throw in Infernal just for the hell of it.

Here comes the fun part. There are a few things we need to make him a total construct. Stone golems have immutable form, magic resistance, and magic weapons. So we’ll include those. Magic resistance offers an effective +2 AC bump, but we have some room thanks to Olmec’s lousy Dex.

I think giving Olmec an innate ability to block incoming attacks (a la the shield spell) that gives him a +3 AC til the start of his next turn.

Finally, I gave Olmec a new trait I fashioned which makes it difficult to use Strength saving throws on him.

Olmec will also be a spellcaster focusing mostly on ranged attacks and area control and defensive spells to keep people away from him. I’ll save most of his spells for area control and let him use his actions to be the real damage dealers.

How does Olmec attack? Okay, here’s what we already know about him:

Taking this idea, I suddenly imagined Olmec being in a very narrow hallway, using rays to really smash the PCs.

How much damage should Olmec’s rays deal? We need Olmec to deal 50 damage per turn. I think giving him multiattack using two rays sounds good, and he can also use a ray a third time with one of his legendary actions. That means each ray should deal an average of 16.67 damage. With d6s that’s 4-5 damage dice, d8s that’s 3-4, and d10s is right around 3. I’m going to go with 3d10 which feels perfect for his main damage dealing ray (which is just like the spectator’s wounding ray).

Just in case creatures get close enough, Olmec can also bite them. Because why the hell not?

I think we can keep this nice and neat. We’ll give Olmec three legendary actions allowing him to use one of his rays. Also, I like the idea of him being able to blow back creatures with his mouth. That should cost two actions. And for a third option, he can cast a cantrip. Finally, since this is a throwback to old-school Tomb of Horrors, I think giving him a legendary eye ray that teleports characters outside of the dungeon would be freakin’ hilarious (in an evil DM sorta way).

And if you remember from before, I tossed in a shield-like power for his reaction.

The only thing that’s really missing here are regional and lair effects. But since he’s going into a pre-made adventure, I think we can leave those out for now. However, my recommendation would be giving Olmec more powers that kept PCs from reaching him.

Putting it all together.

Okay, now that we have all the design notes in place, it’s time to assemble Olmec and check our math. Here goes!

Immovable. Olmec has advantage on Strength saving throws. In addition, he is immune to any spell or magical effect that would affect his movement (such as expeditious retreat or levitate).

Immutable Form. Olmec is immune to any spell or effect that would alter his form.

Magic Resistance. Olmec has advantage on saving throws against spells and other magical effects.

Spellcasting. Olmec is a 6th-level spellcaster. His spellcasting ability is Intelligence (spell save DC 15, +7 to hit with spell attacks). Olmec has the following wizard spells prepared:

Eye Rays. Olmec shoots two of the following magic eye rays at one or two creatures he can see within 120 feet of him. He can use each eye ray only once on a turn.

Shield. When Olmec is hit by an attack, he can use his reaction to create an invisible barrier of magical force that appears to protect him. Until the start of his next turn, he has a +3 bonus to his AC, including against the triggering attack.

Eye Ray. Olmec uses one of his eye rays.

Blow Wind (2 Actions). Olmec blows a line of strong wind 60 feet long and 10 feet wide from his mouth. Each creature in the area must succeed on a DC 18 Strength saving throw or be pushed 20 feet away in a direction following the line.

Teleportation Ray (3 Actions). Olmec targets one creature he can see within 120 feet of him. The target must succeed on a DC 15 Charisma saving throw or be teleported to a location within 500 feet of Olmec’s location. It can be a place Olmec can see or one he can visualize (such as the front entrance of the temple or a prison cell).

Thanks again and enjoy!