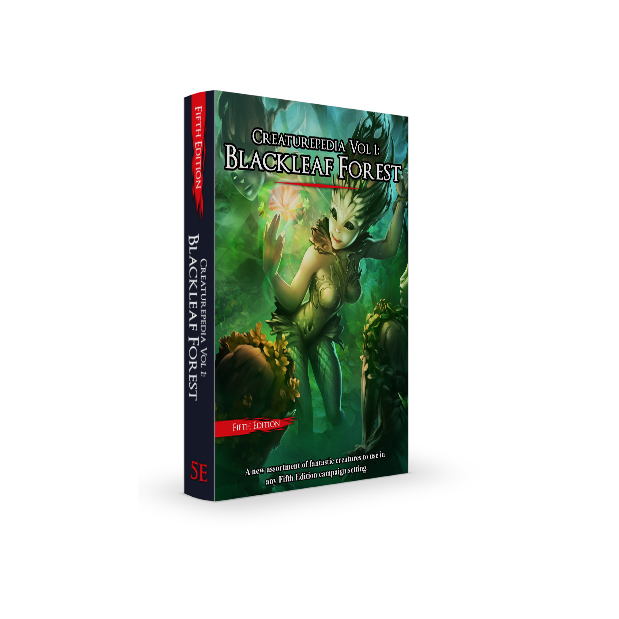 DM DaveLeave a Comment on Creaturepedia Vol 1: Blackleaf Forest – NEW PDF Out Next Week!Posted in Announcements

Next week, I’ll be releasing Creaturepedia Vol 1: Blackleaf Forest, a collection of 40+ monsters to fill your Fifth Edition campaigns.

In addition to the monsters, it will include FIVE new subclasses, too, two of which have yet to appear here on the blog exclusive to this release.

The book will be available on Patreon.com/DMDave along with all the other content on there. PLUS when you become a patron–even at the $3 level–you get a copy of EVIL, too.

The best part? This is only ONE of THREE books I’m putting out in early March. The other two books are described below.

Ever wanted to play a god in a Fifth Edition setting? This sourcebook teaches you how you can do that using online forums. It includes rules for playing twelve different types of gods, influencing settings, creating conflicts, building dungeons and fortresses, and even creating new races.

The Voice in the Dark 5e Adventure

Who ransacked the great temple at Heaminster? The Heaminster medusans want answers. The Confederates claim it wasn’t them, but the medusans don’t believe them. Already, Black Crusaders are mobilizing, heading east over the Wicked Maple River. Plus, there are rumors that an ancient and evil spirit has been seen haunting Orcmire Moor. Only a team of keen investigators will be able to solve the mystery of the Voice in the Dark, an adventure for 3 – 5 characters of 1st level.

Get all three books when you become a patron!

Some people claim I give away TOO much content. If you’ve been a fan of the page here, then you probably know what it’s all about.

It’s only $3 to become a patron. Join today!