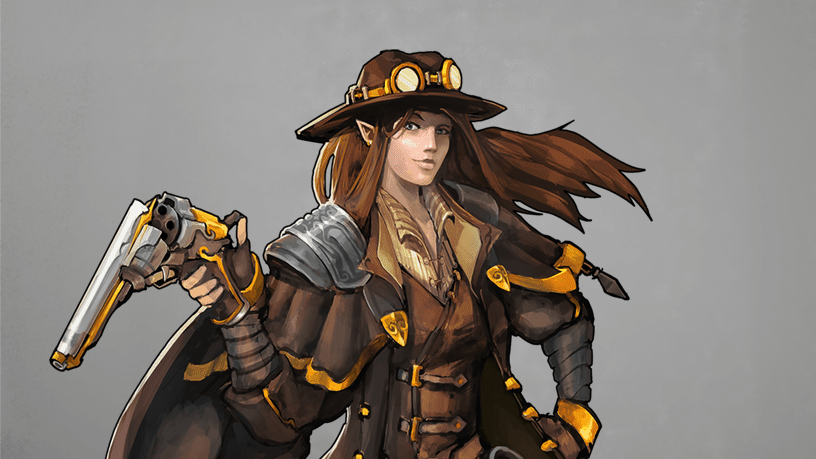 It was inevitable. Sooner or later I’d have to create a gunslinger class for Fifth Edition. I suppose it’s sort of like a coming-of-age for those of us who create original Fifth Edition content.

Already, I’ve imagined Wandrossa having sort of a mix of age of sail and Napoleonic Wars vibe to it. This adds to that.

Right away, I had a feeling for how I wanted to make this class. For a little insight into how my game balancing and creation method works, I do something called “parallel balance.” Basically, I take a preexisting piece of official content, pick the optimal settings for it, then retheme it so it fits whatever I’m building.

For example, the tactician class that I recently put together is a bard minus magic (the subs will make up for that) with optimal support powers. There is nothing that the tactician can do that, in theory, a support bard couldn’t also do.

Same deal with the gunslinger I’m about to build. Part of me really wanted to take the monk class and use it, but instead, I went with fighter for the ASIs and attacks.

The build was pretty straight forward. Here are the major changes:

And that’s it! Hope you enjoy!

As a gunslinger, you gain the following class features.

Hit Points at Higher Levels: 1d10 (or 6) + your Consitution modifier per gunslinger level after 1st

Tools: Choose one type of artisan’s tools or one musical instrument

Beginning at 1st level, while you are wearing no armor and not wielding a shield, your AC equals 10 + your Dexterity modifier + your Charisma modifier.

Starting at 1st level, you are an expert with the use of firearms. You gain the following benefits:

You have a knack for avoiding attacks. When you are hit by an attack, you can use your reaction to reduce the attack by an amount equal to 1d10 + your gunslinger level. Once you use this feature, you must finish a short or long rest before you can use it again.

Starting at 2nd level, you can assist an ally in combat by distracting foes with your shots. On your turn, immediately after you take the Attack action using a firearm, choose one creature that is not incapacitated within 10 feet of you. That creature gains a +2 bonus to its AC and it can use its reaction to take one of the following actions: Attack (one weapon only), Dash, Disengage, Hide, or Use an Object.

Once you use this feature, you must finish a short or long rest before you can use it again. Starting at 17th level, you can use it twice before a rest, but only once on the same turn.

At 3rd level, you choose an archetype that you strive to emulate in your combat styles and techniques. Choose Hand of the God or Trick Shot, both detailed at the end of the class description. The archetype you choose grants you features at 3rd level and again at 7th, 10th, 15th, and 18th level.

At 6th level, you learn how to make your firearms shots undercut a creature’s resistances. Shots from your firearms count as magical for the purpose of overcoming resistance and immunity to nonmagical attacks and damage.

Also at 6th level, your keen awareness and reflexes give you an edge in combat. When you make an initiative check and you aren’t surprised, you can roll a bonus 1d4 and add it to the initiative check.

Starting at 13th level, there’s not a whole lot in the multiverse that can shake you. You have advantage on saving throws against becoming frightened.

Different gunslingers choose different approaches to perfecting their gunfighting prowess. The gunslinger archetype you choose to emulate reflects your approach.

The Hands of God are extensions of the deities of the multiverse. They combine the firearms mastery common to all gunslingers with a careful study of divine magic. Hands of God use magical techniques similar to rangers. These gunslingers learn a comparatively small number of spells than rangers.

When you reach 3rd level, you augment your martial prowess with the ability to cast spells. See Chapter 10 for the general rules of spellcasting and chapter 11 for the ranger spell list.

Spell Slots. The Hand of God Spellcasting table shows how many spell slots you have to cast your spells of 1st level and higher. To cast one of these spells, you must expend a slot of the spell’s level or higher. You regain all expended spell slots when you finish a long rest.

Spells Known of 1st-Level and Higher. You know three 1st-level ranger spells of your choice.

The Spells Known column of the Hand of God Spellcasting table shows when you learn more ranger spells of 1st level or higher. Each of these spells must be of a level for which you have spell slots. For instance, when you reach 7th level in this class, you can learn one new spell of 1st or 2nd level.

Whenever you gain a level in this class, you can replace one of the ranger spells you know with another spell of your choice from the ranger spell list. The new spell must be of a level for which you have spell slots.

Spell save DC = 8 + your proficiency bonus + your Charisma modifier

At 3rd level, you learn a ritual that creates a magical bond between yourself and one weapon. You perform the ritual over the course of 1 hour, which can be done during a short rest. The weapon must be within your reach throughout the ritual, at the conclusion of which you touch the weapon and forge the bond.

Once you have bonded a weapon to yourself, you can’t be disarmed of that weapon unless you are incapacitated. If it is on the same plane of existence, you can summon that weapon as a bonus action on your turn, causing it to teleport instantly to your hand.

You can have up to two bonded weapons but can summon only one at a time with your bonus action. If you attempt to bond with a third weapon, you must break the bond with one of the other two.

Starting at 7th level, when you hit a creature with a ranged weapon attack, you can expend one spell slot to deal radiant damage to the target, in addition to the weapon’s damage. The extra damage is 2d6 for a 1st-level spell slot, plus 1d6 for each spell level higher than 1st, to a maximum of 4d6. The damage increases by 1d6 if the target is undead or a fiend.

Starting at 10th level, you can use some of your divine might to protect one of your allies. As a bonus action, choose a friendly creature within 10 feet of you that you can see. The creature gains a bonus to its saving throw equal to your Charisma modifier (with a minimum bonus of +1). The effect lasts as long as you are conscious and the creature remains within 10 feet of you, until you use this feature again to select a different friendly creature, or you use your action or bonus action to end the effect.

Starting at 18th level, when you use your action to cast a spell, you can make one weapon attack as a bonus action.

The Trick Shot gunslinger studies a unique method of gunfighting that weaves magic into its shots to produce supernatural effects. Trick Shots are some of the most elite gunfighters in the multiverse.

Note: for all intents and purposes, the Trick Shot archetype is the Arcane Archer archetype from Xanathar’s Guide to Everything except with the following changes:

Have a request? Become a Patron!

Patrons of all levels get requests created by me. In addition, they receive FREE PDF copies of all the content create PLUS they get to participate in the Gods of Wandrossa game.