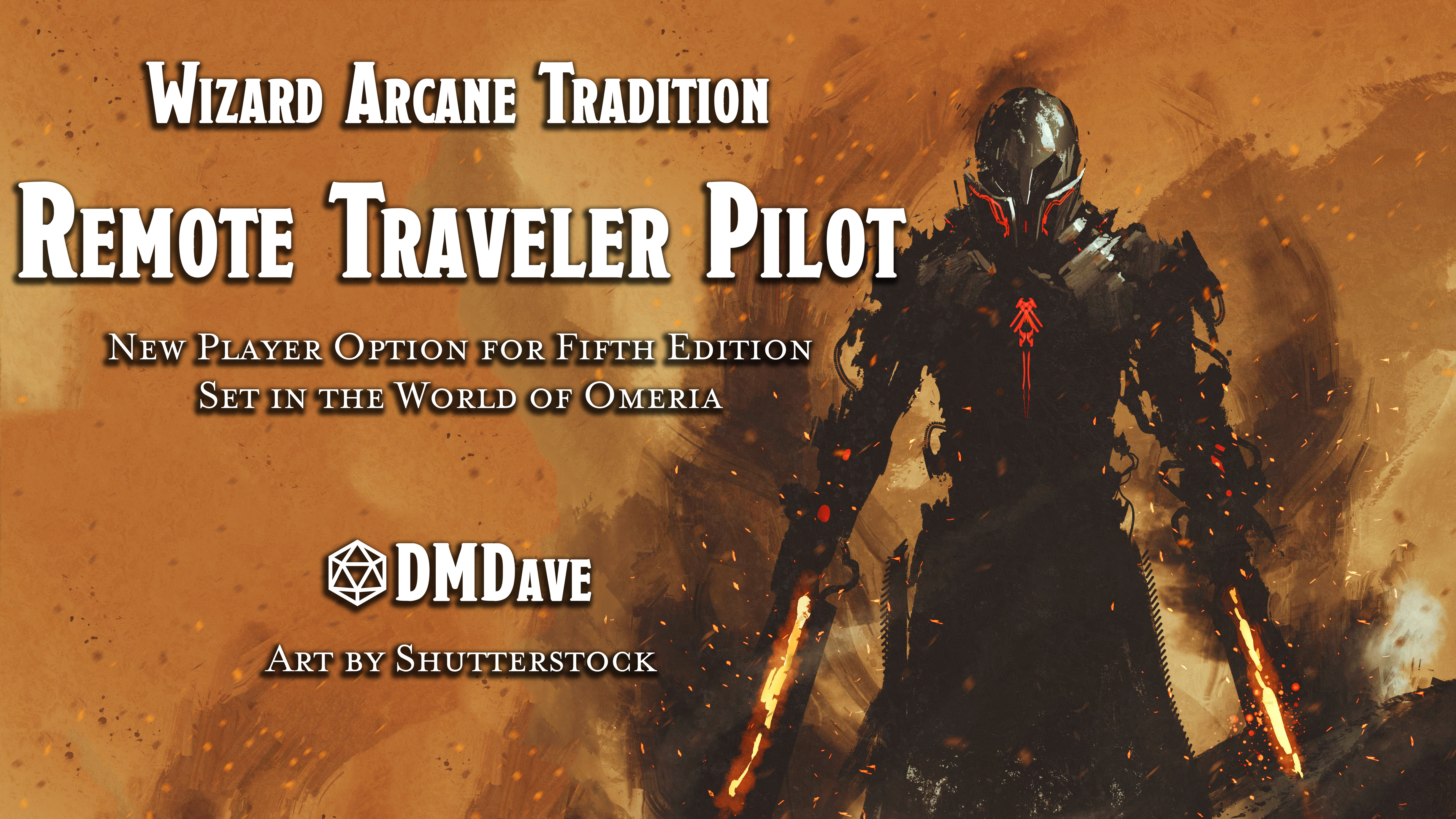 At 2nd level, a wizard gains the Arcane Tradition feature. The following Remote Traveler option is available to a wizard, in addition to the options normally offered.

Dinzers, the demonym for the inhabitants of the Odonburg Nations of South Omeria, are known for two things. First, they are incredibly well-mannered and thoughtful of decorum. Even the toothy wuhlos of Jabros know how to carry themself in front of others. Second, they are by leaps and bounds the most technologically advanced nation in Omeria if not the world. Incorporating magic with modern engineering, Dinzers have turned the jungles and savannahs of southern Omeria into a true utopia. Crime is low, poverty is almost totally eradicated, and on average, Dinzers live 20-30 more years than the other Omerians.

A big part of Odonburg’s success in the realms arcane is due to their monopoly of the natural resource emerald Odonburgite. Emerald Odonburgite is a glowing, green gem that emits powerful evocation energy. Energy collected from samples even as small as an acorn is enough to offer an infinite supply of charges for their weapons, vehicles, and other magic items. Unfortunately, emerald Odonburgite is extraordinarily rare. As such, the Dinzers jealously guard their limited supply.

Beginning when you select this arcane tradition at 2nd level, you gain a remote traveler suit. With 8 hours of work, a suit of plate mail armor, and 100 gp worth of emerald Odonburgite and raw materials you imbue the suit of armor with energy from the Odonburgite.

At the end of the 8 hours, the suit animates and gains all the benefits of your Traveler Bond ability. You can have only one remote traveler at a time.

If your remote traveler is ever destroyed, the magical bond you share allows you to recreate it. With 8 hours of work and expenditure of 50 gp of emerald Odonburgite, you recreate the armor. You can recreate the armor even if you do not have the original suit of armor or a new one to replace it.

if you use this ability to recreate a former remote traveler while you have a current remote traveler, your current raveler leaves you and is replaced by the restored traveler.

Your remote traveler uses the suit of animated armor stat block from the MM except the animated armor loses its Multiattack action and its movement speed is 30 ft.

The armor obeys your commands as best it can. It takes its turn on your initiative, though it doesn’t take an action unless you command it to. On your turn, as long as you and the traveler are on the same plane of existence, you can mentally command the traveler where to move (no action required by you). You can use your action to mentally command it to take any action that would normally be available to you except it cannot Cast a Spell.

If you incapacitated or absent, the animated armor acts on its own, focusing on protecting you (if you are present) and itself. The armor never requires your command to use its reaction, such as when making an opportunity attack.

Your traveler has abilities and game statistics determined in part by your level. Your armor uses your proficiency bonus rather than its own. In addition to the areas where it normally uses it proficiency bonus, a remote traveler also adds its proficiency bonus to its damage rolls. Its Intelligence, Wisdom, and Charisma scores equal your own, and it is proficient in the same skills, tools, and saving throws that you are.

Your traveler does not require air, food, water, or sleep and it is immune to disease. When your traveler takes a long rest, it must spend at least six hours of it in an inactive, motionless state, rather than sleeping. In this state, it appears inert, but it doesn’t render the traveler unconscious, and you can see and hear as normal. At the end of a long or short rest, it gains the same benefits as any other creature from taking a rest.

The remote traveler cannot wear armor. Its natural AC is 18 (it does not add its Dex bonus). A shield’s benefits apply as normal while it uses its natural armor.

Your traveler’s alignment is always unaligned and has no personality traits, bonds, or flaws of its own.

As long as your traveler is on the same plane of existence as you, you can mentally control it. Additionally, as an action, you can see through the traveler’s eyes and hear what it hears until the traveler is destroyed or you use your action to end the remote sensing effect. You do not gain the benefits of its blindsight, but you can use your own special senses through the suit’s eyes (such as darkvision, truesight, the benefits of see invisibility, etc.). During this time, you are deaf and blind with regard to your own senses, and you are unconscious.  You can also speak through the traveler which projects your voice as if it was speaking. Each time you speak, you may choose to have its voice sound the same as yours or altered.

While the animated armor is normally immune to the blinded, charmed, deafened and frightened conditions, while you are piloting the armor via this feature, it passes any spells or effects that would cause these conditions onto you, and you must make any required saving throws in its place. If you fail the saving throw, you are affected by the spell or effect instead of the remote traveler. In addition, while the armor itself is immune to psychic damage, any spells or effects that deal psychic damage are passed on to you as if you were the target.

Finally, when you cast a spell with a range of self or you cast an evocation or abjuration spell with a casting time of 1 action, your traveler can deliver the spell as if it had cast the spell. Spells with a range of self target your traveler or you (your choice). Your traveler must be on the same plane of existence as you (at least until you reach the 14th level in this class), and it must use its action on its next to deliver the spell when you cast it. If it can’t cast the spell on its turn, the spell has no effect and you lose the spell slot as if you had cast it. If the spell requires an attack roll, you use your attack modifier for the roll.

Also at 2nd level, as an action, you can expend one spell slot of 1st level or higher to have your remote traveler regain hit points equal 1d6 + your spellcasting modifier, plus 1d6 for each spell level higher than 1st, to a maximum of 5d6.

Beginning at 6th level, when you use your action on your turn to command your remote traveler to take the Attack action, it can attack twice, instead of once. The number of attacks increases to three when you reach 14th level in this class.

At 6th level and again at 10th level and 14th level you can apply an upgrade to your traveler.  when you gain a level in this class, you can choose one of the upgrades you’ve applied and replace it with another upgrade that you could add at that level. Unless it states otherwise in the upgrade’s description, you can only choose an upgrade once. If an upgrade requires a level, you must be that level in this class to apply the upgrade to your traveler. Choose one of the following benefits:

Amphibious Mode. The traveler gains a swim speed of 30 ft.

Arcane Detection System. Your remote traveler can cast detect magic at will, without expending one of your spell slots.

Defensive Maneuvers. The remote traveler gains proficiency in one saving throw of your choice.

Disguise Protocol. Your remote traveler can cast disguise self at will, without expending a spell slot.

Improved Suspension. The traveler’s walking speed becomes 40 feet unless its walking speed is already higher, and its speed isn’t reduced if it is encumbered. In addition, it can jump three times the normal distance, though it can’t jump farther than its remaining movement would allow.

Protection from Energy. Choose one of the following damage types: acid, cold, fire, lightning, necrotic, radiant, or thunder. Your remote traveler gains resistance to the chosen damage type. You can choose this upgrade multiple times, choosing a different energy type each time you do.

Translation Systems (10th Level Required). Your remote traveler can cast comprehending at will, without expending one of your spell slots.

Starting at 10th level, when the traveler’s hit points are reduced to 0, it can make a Constitution saving throw with a DC equal to 5 + the damage taken unless the damage is from a critical hit. If the saving throw is successful, the traveler drops to 1 hit point instead.

Starting at 14th level, you can mentally control your remote traveler even if it isn’t on the same plane of existence as you.

Taking Out a Loan for a Suit

Creating a remote traveler requires a full suit of plate mail present during the ritual. At 2nd level, the cost to acquire a suit of plate mail can be somewhat steep, typically 1,500 gold pieces or more. To account for this cost, at the GM’s discretion, the wizard may work with a local mage’s guild, private investor, or some other source of capital to purchase the suit with a small loan. Typically, the wizard taking out the loan will owe the principal on the loan plus 10-20% interest due at the end of the term. Most terms are 6-months to a year. The suit itself would act as collateral for the transaction. Each suit is equipped with a “kill switch” that allows the bank or investor to disable it (as if it was in an antimagic field) in case the debtor fails to repay the loan.

Want this in PDF plus over 120 more PDFs? Check out DMDave on Patreon. You get weekly adventures, new races, monsters, subclasses, and more. Patron tiers start at only $1.