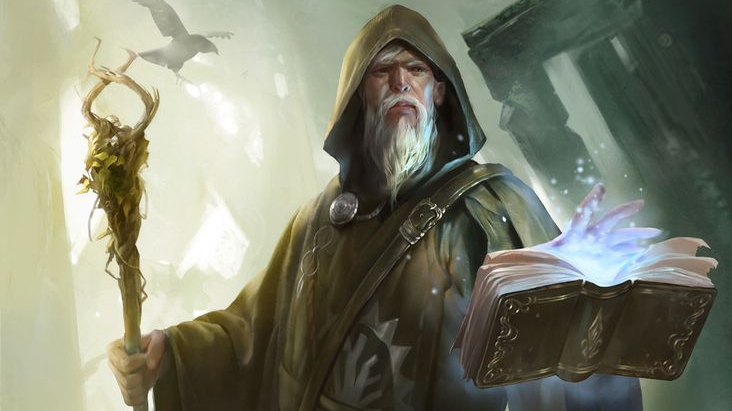 The adventure Bzallin’s Blacksphere has a lot of interesting characters in it, as well as a fair amount of NPCs. For a normal-sized group, it’s a pretty challenging adventure. But my group has 6 characters and a shield guardian. So that means I need to scale it up considerably.

This stat block for Bzallin’s disciples replaces those normally in the setting (with the exception of Raxalla, who is considerably tougher than the rest).

They all need to be casters of CR 14, making two a Hard challenge for the characters and one an Easy challenge. Raxalla will be considerably harder (on Deadly level). She comes with a mezzoloth to assist her, so her CR should be 20 or 21.

Magic Resistance. The disciple has advantage on saving throws against spells and other magical effects.

Innate Spellcasting. The disciple’s innate spellcasting ability is Intelligence (spell save DC 18, +10 to hit with spell attacks). The disciple can innately cast the following spells:

Spellcasting. The disciple is a 20th-level spellcaster. Its spellcasting ability is Intelligence (spell save DC 18, +10 to hit with spell attacks). The disciple can cast disguise self and invisibility at will and has the following wizard spells prepared:

Wand of Lightning Bolts. The wand has 7 charges. The disciple can expend one charge to cast the lightning bolt spell (save DC 15).

These are the basic tactics for the disciples:

Two or more present: one disciple will work defense while the others work damage dealing. As combat starts, one disciple will trap the toughest melee combatants in a forcecage or if it is tactically better, put up a wall of force. Then, the second mage will start targeting the spellcasters and damage dealers using their most aggressive spells (9th level and down). If the disciples have time to prepare, they will prep themselves with mirror image and invisibility.