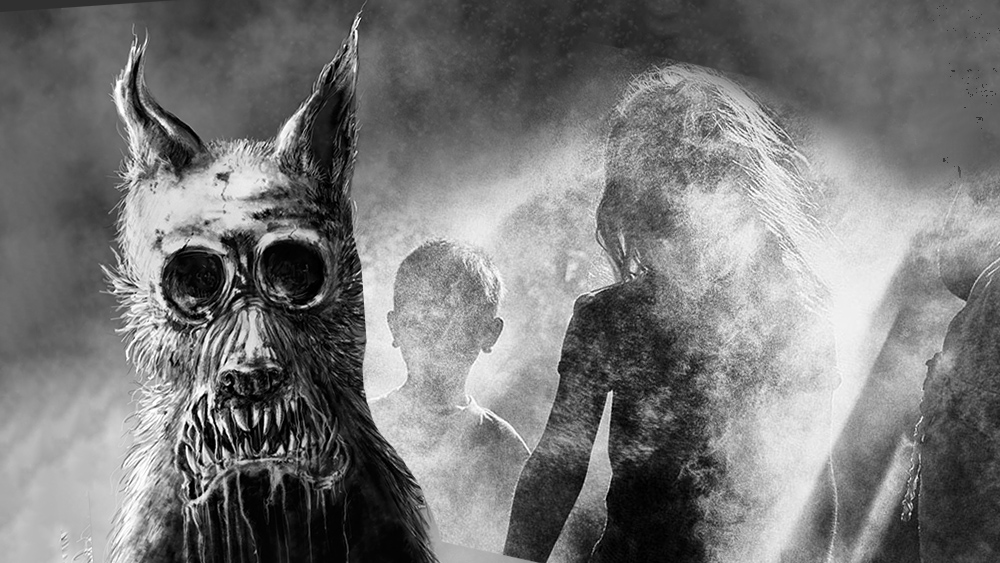 Tell me about the ghosts, brother.

“Which ones? There were so many. So many horrible things. Just lurking there. A part of it all.”

You mentioned one that was a dog. With children? No?

“Doghead and the Cold Children. Gods, that was horrible. Just horrible.”

Yes. That is the one. Tell us about that one.

“There was a cave. Towards the center of it all. We’d made it past the other things. Lost a couple knights along the way, of course. Gregor. Patrice. Good soldiers, both of them. We were tired. Needed rest. Some thought about making our way back out the way we came and resting in the foothills. Of course, that was no good. Far too tired to repel back down the cliffside and the Graywood’s been thick with goblins as of late.”

I see. So you and your coterie rested?

“Aye. Just for a couple’a hours. We needed our bearings back. The mind, you see. It affects the mind, those caves. It’s so hard to tell what is real and what isn’t real. But that thing… the doghead. Aye, that was real.”

“Two eyes. Blank. Staring. Its maw agape. You see, it didn’t look alive, aye? But it was still alive. In a way. Like those things that got Gregor.”

“Aye. It had no body to speak of. None that we could see at least. Just floated there. Spikes stuck out of it; like the kind you see on a manticore’s tail. Blood poured from where its damn neck should’ve been, too, the blood- the drops- it ne’er touched the ground. Vanished. Gods, its eyes. Horrible, really. And that’s when we heard the children. Crying. Begging. We… we couldn’t look away. The fog grew around us. It was cold. Frost stuck to our armor. Our swords stuck in their sheaths. Could feel the tears in my eyes turnin’ to ice.”

“Once maybe. The way they talked, those poor things, like the little souls didn’t know that they were– They didn’t know, aye? They rose from the fog, the little bodies, their bodies so cold. I…”

That’s how you lost your fingers, isn’t it?

“The cold. Froze them right off, their touch. I- oh Gods, the children… I…”

“I’d rather not speak about this anymore. Can I just rest, milord?”

Of course, brother. Of course.

There once was a village named Greenhill.

No one remembers Greenhill, of course. Not even books can recall the hamlet or its people. Greenhill’s history was erased hundreds of years ago by the progenitors of the chaosmen.

Every man and woman killed.

Every house burned to the ground.

All her fields salted.

And later, the ashes and ruins and bones of their village were consumed by the Graywood.

Not even the gods remember Greenhill.

In its last moments, Greenhill fought to protect its own. Every able body took to arms as the sound of thundering hooves poured into the peaceful valley.

At the behest of the elders, two older boys, Galos and Mitrin, whisked the children of Greenhill away. They fled to the old mountain (today, you know it as The Forsaken Peak), and scaled the long, snow-beaten path these times known as The Endless Road. The boys’ faithful dog, Amelie traveled at their side, keeping the children entertained despite the cold, exhaustion, and dread.

Reaching the peak, Galos and Mitrin escorted the children beyond the crumbling temple, carefully scaling the southern pass. That is where they entered the mountain. The tunnels were frozen, harsh and difficult to climb, but the two boys got each of the younglings into the heart of the mountain. A quiet cave they discovered, one far from the entrance, one where the children would hide.

For some time, Galos and Mitrin (and Amelie, of course) stayed with the children. They sang songs and told old tales. There was enough food for them there they could have waited out the long winter month. All of them could have survived there together.

But Galos and Mitrin were brave boys. And their minds were always on their parents.

Eventually, the boys, desperate to return to defend their home, told the children they must leave. Naturally, the children were terrified.

“We will be back, I promise,” Galos reassured the children. “And we will bring your parents with us when we do.”

Finally, Galos put a hand on Amelie’s shaggy head and handed the sweet girl’s rope to the eldest of the children. “Amelie will watch over you. She will guard you. And she will never let anything happen to you. Always” Amelia barked in agreement, licking the child on the face. Then Galos and Mitris left.

Of course, neither boy returned. They, like the children’s parents and all the other people of Greenhill, died at the hands of the raiders. And like the rest of Greenhill, they were forgotten.

Undead Nature. Doghead and the cold children do not require air, food, drink or sleep.

Cold Aura. At the start of each of the doghead’s turns, each creature within 30 feet of it takes 5 (1d10) cold damage.

Magic Resistance. The doghead has advantage on saving throws against spells and other magical effects.

Languages any languages it knew in life

Cold Fog. The child emits a permanent cloud of chilling fog extends in a 15-foot-radius sphere centered on the child. It spreads around corners and its area is heavily obscured. The child can see through its own fog and the fogs of other cold children. If the cold child is destroyed, the fog dissipates in 3 rounds.

Ethereal Sight. The cold child can see 60 feet into the Ethereal Plane when it is on the Material Plane, and vice versa.

Incorporeal Movement. The cold child can move through other creatures and objects as if they were difficult terrain. It takes 5 (1d10) force damage if it ends its turn inside and object.

Welcome to the Eyries

What horror created the Eyries? No one knows. It’s clear at one point it was a system of caves populated by the typical subterranean and nocturnal beasts one expects from the Peak. But now all life is stripped of it. And it oozes with desecration as if the world around it fears it. Within its haunted tunnels, one might find doghead and the cold children or even something worse.

The Eyries is the second chapter of my collaboration with Justin David Russell, The Secret of Forsaken Peak (coming soon).  You can get part one now, available for FREE on the blog: The Goblin Mine.