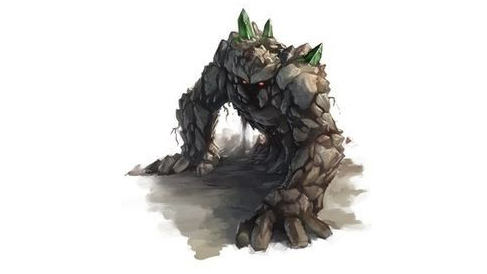 An earth weird is an elemental guardian bound to a specific earthy or dirty-filled location such as a courtyard, hillside, or mountain pass. Earth weird hide in the ground and emerge to attack any creature other than its summoner and those its summoner declares as off limits. When slain, an earth weird collapses into a pile of dust and rock.

Good and Evil Weirds. Like most elementals, an earth weird has no concept of good or evil. However, the earth weird begins to take on the nature of that site, becoming neutral good or neutral evil. A neutral good earth weird tries to frighten away interlopers rather than kill them, while a neutral evil earth weird kills its victims for pleasure and might turn against its summoner.

False Appearance. While the weird remains motionless, it is indistinguishable from normal rocks and soil.

Earth Bound. The earth weird dies if it leaves the earth to which it is bound or if that earth is destroyed.