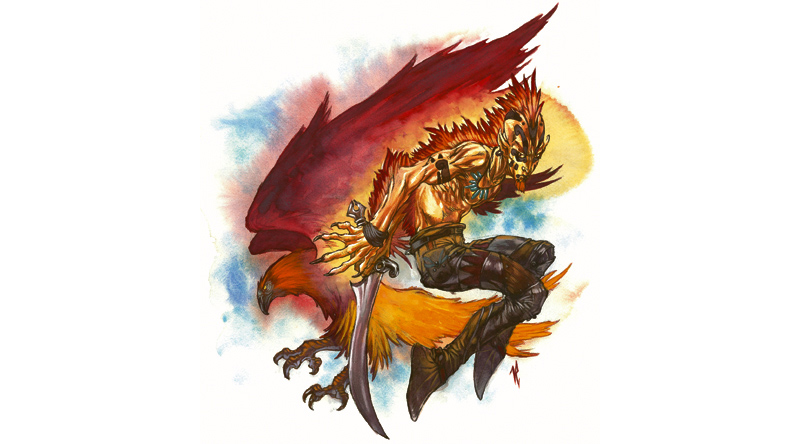 Phoenixes seem to be trending with the crowdsourced Wandrossa campaign setting. Already, I’ve created the powerful Phoenix Dragons for this setting. And now there’s a request for Phoenixkin from one of my patrons.

Here is what Patron Romulo requested:

I was talking with a friend after our d&d session tonight and we were looking at the monsters on your blog and had the idea of a Phoenixborn. Kinda crazy but I like the whole birdfolk thing, some of my favorite characters were aarakocra [or] kenku, so I think it could be very interesting. 😁

I like the idea of a Phoenixborn being able to rise from the ashes, like a once per long rest thing or a little weaker than that if it’s too broken but also having some kind of weakness that destroys them forever, like the vampires.

I’d leave the details at that and let the patrons work on the rest.

Now, on to Romulo’s request, the Phoenixkin (Enombathonians) are flightless, bird humanoids. Kinda like kenkus, but red and orange feathers, with more of a Phasianidae/peacock structure than eagle (like aarakocra) or corvis (like kenku).

Age. Enombathians mature at a slower rate than humans do, reaching maturity in their early twenties. Thanks to their regenerative powers, enombathonians live exceptionally long lives, often 120 years per lifetime.

Alignment. Enombathonians tend toward no particular alignment. The best and worst are found among them. However, individual enombathonian alignments can greatly vary between regenerations.

Size. Enombathonians are slightly shorter than humans but a little taller than dwarves, standing between 4 and 5 feet tall. They have slender builds, although some enombathonians have broad plumages that may give the appearance of a thicker build. Your size is Medium.

Phoenix Magic. You know the dancing lights cantrip. Charisma is your spellcasting ability for this spell.

Phoenix Resistance. You have resistance to fire damage.

Positive Energy Catalyst. Healing magic is much more effective when cast upon you. You regain +2 additional hit points whenever you are the target of a healing spell.

Regeneration. Enombathonians can live up to 9 lifetimes. When you create your enombathonian character, you start on your 1st lifetime.

If you die, you immediately burst into flames. Each creature within 10 feet of you must make a DC 12 Dexterity saving throw or take 1d6 fire damage. The fire ignites flammable objects in the area that aren’t worn or carried. The explosion destroys your body and leaves behind an egg-shaped cinder that weighs 3 pounds. The cinder is blazing hot, dealing 2d6 fire damage to any creature that touches it, though no more than once per round. The cinder is immune to all damage, and after 1d6 days, it hatches and you are reborn.

When you are reborn, you are a younger version of yourself. You have the following drawbacks:

If you reach your 9th lifetime and die, you are permanently dead and cannot be raised with a revivify, resurrection spell or similar magic. However, a wish spell can be cast upon you to grant you an extra lifetime.

Languages. You can speak, read, and write Common and Ignan.

Learn more about Enombathonians (Phoenixkin) when you become a Patron!

Enombathonians are a part of the Wandrossa crowdsourced campaign setting on Patreon. Every day, I hold polls and take requests to build the world. It’s getting more interesting each day!

You can learn more about Wandrossa by grabbing the latest copy of the Wandrossa Gazetteer.

If you’d like to become a Patron, check out my Patreon. It’s only $3 to join!