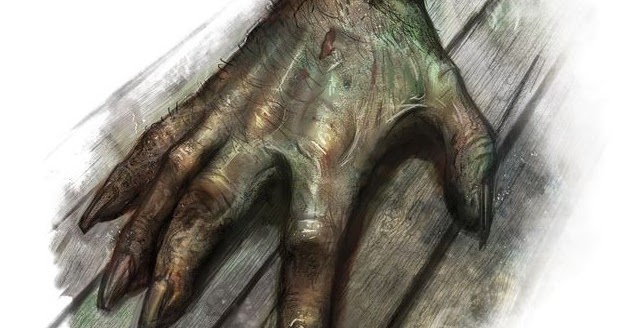 Lately, I’ve been working on a bevy of subclasses that seem have somewhat of an evil bent to them. So today, I announced my on Patreon that I’m going to be creating a mini-player option book called EVIL (yes, in all caps). This book will include all the subclasses I’ve been creating lately in their finalized form plus some other nifty stuff I’m cooking up for patrons. It might even include an evil adventure.

Today, while I was thinking about this idea (in the shower, of course), I was thinking of some fun, evil spells. That’s when it hit me: what a spell where you can possess a humanoids hand and have it attack him a la Evil Dead 2?

Therefore, I need to match spells to each of these three effects in order to determine the spell’s level.

Okay, so we have the basics out of the way. Judging by everything I put up there, I think the spell’s effects that I’m thinking of most closely resembles bestow curse, but a just little better. However, it’s still not as good as dominate person. Therefore, I see my evil hand spell as a 4th-level necromancy spell. I plan on giving it the same range, duration, and higher-level duration bumps as dominate person.

New Spell: this following spell is available to sorcerers, warlocks, and wizards.

You attempt to animate and control a humanoid’s hand that you can see within range. The target must succeed on a Charisma saving throw or the target loses control of its hand and the hand becomes charmed by you for the duration. For the spell’s duration, the target can no longer hold anything in the charmed hand or with two hands unless you will the charmed hand to do so.

While the hand is charmed, it takes on the statistics of a crawling claw (MM, page 44), and you have a telepathic link with it as long as the two of you are on the same plane of existence. You can use this telepathic link to issue commands to the hand while you are conscious (no action required), which it does its best to obey. You specify a simple and general course of action, such as “Attack that creature,” “Fetch that object,” or if it is free of the target’s wrist, “Crawl over there.” If the hand completes the order and doesn’t receive further direction from you, it defends itself to the best of its ability. As long as the charmed hand is still attached to the target’s wrist, it is grappled by the target. However, the hand can still make attacks against the target and other creatures within reach.

Once it loses its hand, the target can no longer hold anything with two hands, and it can hold only a single object at a time. Magic such as the regenerate spell can restore the lost appendage.