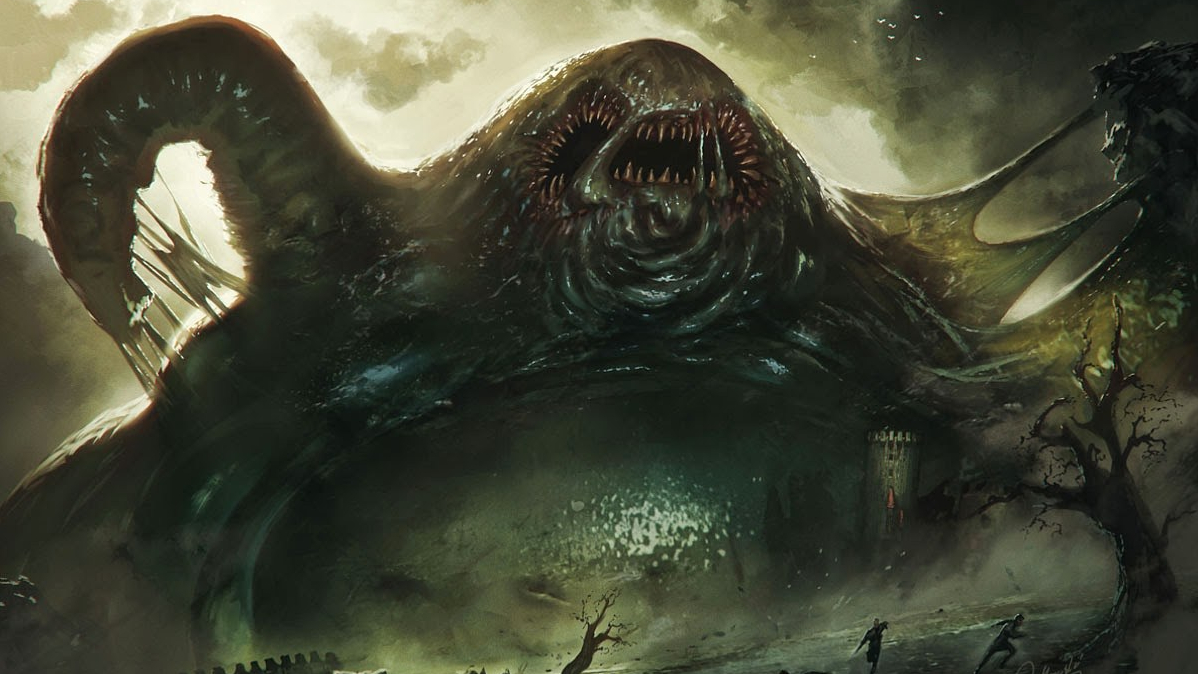 Warning: this post contains spoilers for the Saturday Bloody Bunch campaign. If you are invested in the story as a player, I recommend you don’t read beyond this point. You’ve been warned.

“Mother, can you hear me? It’s your greatest son, Nezznar. I am here, mother. I am warmed by your embrace. You dance in my memories. We are bound as one, son and mother.”

By experimenting on the slimes, jellies, and pudding that infest the depths of the Underdark, mind flayers created a special breed of ooze, the oblex–a slime capable of assaulting the minds of other creatures.

The greatest of oblexes, the mother, is a dangerous creature the size of a small town. The slime lurks below the town, creating hundreds of simulacrums crafted from the memories of its victims.

Amorphous. The oblex can move through a space as narrow as 1 inch wide without squeezing.

Aversion to Fire. If the oblex takes fire damage, it has disadvantage on attack rolls and ability checks until the end of its next turn.

Innate Spellcasting. The oblex’s innate spellcasting ability is Intelligence (spell save DC 21). It can innately cast the following spells, requiring no material components:

Intuitive Defense. The oblex’s AC includes its Intelligence modifier instead of its Dexterity modifier.

Sulfurous Impersonation. As a bonus action, the oblex can extrude a piece of itself that assumes the appearance of one Medium or smaller creature whose memories it has stolen. The simulacrum appears, feels, and sounds exactly like the creature it impersonates, though it smells faintly of sulfur. The oblex can impersonate 4d8 + 2 different creatures, each one tethered to its body by a strand of slime that can extend up to 360 feet away. For all practical purposes, the simulacrum is the oblex, meaning the oblex occupies its space and the simulacrum’s space simultaneously. The slimy tether it immune to damage, but it is severed if there is no opening at least 1 inch wide between the oblex’s main body and the simulacrum. The simulacrum disappears if the tether is severed.

Eat Memories. The oblex targets one creature it can see within 10 feet of it. The target must succeed on a DC 21 Wisdom saving throw or take 91 (14d12) psychic damage and become memory drained until it finishes a short or long rest or until it benefits from the greater restoration or heal spell. Constructs, oozes, plants, and undead succeed on the save automatically.

While memory drained, the target must roll a d4 and subtract the number rolled from any ability check or attack roll it makes. Each time the target is memory drained beyond the first, the die size increases by one: the d4 becomes a d6, the d6 becomes a d8, and so until the die becomes a d20, at which point the target becomes unconscious for 1 hour. The effect then ends.

When an oblex causes a target to become memory drained, the oblex learns all the languages the target knows and gains all its proficiencies, except any saving throw proficiencies.

Advanced Simulacrums (Costs 3 Actions). The oblex imbues up to three of its simulacrums with advanced properties. The advanced simulacrums use the same statistics as an adult oblex with the following changes:

Attack (Costs 2 Actions). The oblex attacks once with its pseudopod.

Read Thoughts. The mother oblex magically reads the surface thoughts of one creature within 120 feet of it. The effect can penetrate barriers, but 3 feet of wood or dirt, 2 feet of stone, 2 inches of metal, or a thin sheet of lead blocks it. While the target is in range, the oblex can continue reading its thoughts, as long as the oblex’s concentration isn’t broken (as if concentrating on a spell). While reading the target’s mind, the oblex has advantage on Wisdom (Insight) and Charisma (Deception, Intimidation, and Persuasion) checks against the target.